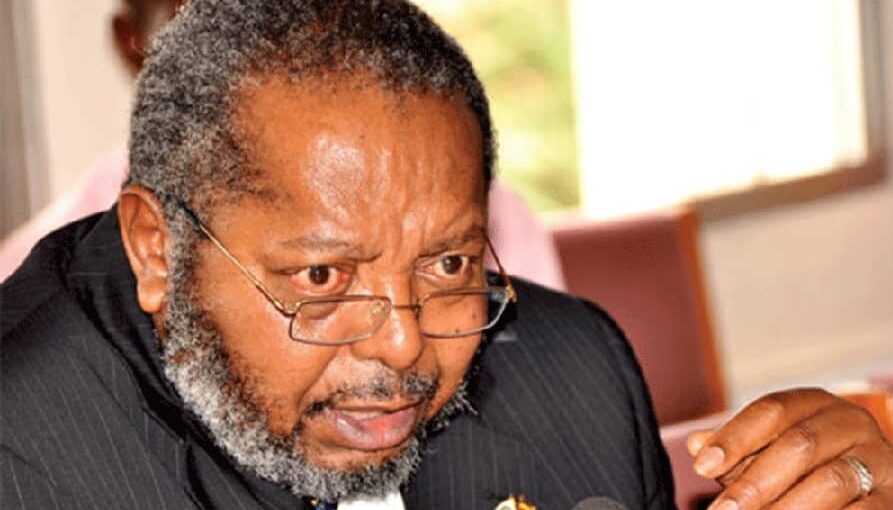 RIP. A dark cloud is hovering over Uganda after God’s angel of death descended and clawed away Bank of Uganda Governor, Prof. Emmanuel Tumusiime-Mutebile.

A dark cloud is hovering over Uganda after God’s angel of death descended and clawed away Bank of Uganda Governor, Prof. Emmanuel Tumusiime-Mutebile.

The death of Mutebile, 72, was announced by the Bank of Uganda in a message issued by Deputy Governor Michael Atingi-Ego.

“It is with profound sadness that the Bank of Uganda announces the death of its gallant Governor, Prof. Emmanuel Tumusiime- Mutebile. #RIPGovernorMutebile. Prof. Tumusiime-Mutebile passed away at the Nairobi Hospital on Sunday 23 January 2022 at around 0500 hrs,” Atingi said. Mutebile has been in and out of hospital since his admission on December 31, 2021 when he collapsed due to diabetes-related complications.

A great loss to the nation, Mutebile’s demise ends his tenure as the head of the central bank, thus fulfilling a prophecy he made about 10 years ago regarding his removal from office.

On Wednesday February 29, 2012, Mutebile irked MPs on the public accounts committee who wanted him to resign over supposed abuse of office by telling them that “only God” can remove him from the Governor’s seat. The legislators led by Kassiano Wadri sought the governor’s resignation a few weeks after the resignation of ministers Sydah Bbumba and Khiddu Makubuya who, together with Mutebile, were accused of scandalously overcompensating city tycoon Hassan Basajjabalaba over the loss of the city markets.

However, while addressing a journalists’ briefing at the BoU head offices in Kampala, Mutebile told off the MPs to leave him alone, going ahead to brand such calls as mere ‘rumblings in parliament’. He said: “I’m here for the long haul. There’s nothing that will take me out of this seat except, maybe, God. And therefore, the markets should not worry about the rumblings in parliament.” The governor’s remarks pained the MPs, with Wadri remarking that they epitomized ultimate impunity and tribalism that had plagued this country. He therefore called upon government to bring Mutebile to order. However, Mutebile further scoffed at the MPs, reminding them that even the president has limited powers to sack him; with the constitution giving him only three grounds including insanity, incompetence and dishonesty. However, noting that he wasn’t guilty of any of the three, Mutebile said; “I can assure you I will be here. There is no case for the President of the Republic to get rid of me. So please tell the markets to remain calm. As you can see, I am not insane… as you can see I am not dishonest and I have not failed to deliver.”

Sooner however, the MPs would realize that their efforts were in vain, with it being apparent that government viewed Mutebile as a rare breed of economist that the country would struggle to do without. Such was his indispensability!

It later emerged that President Museveni and the Cabinet agreed to let the governor off the hook because he was the “rock of the Ugandan economy” and so any administrative action against him would equally destabilize the economy which Mutebile is credited to having transformed to a market-led one.

It is not shocking therefore that he was sure that only God could remove him from his seat, a prophecy that has manifested ten years later.

The Governor’s death is a huge blow to the nation and the world at large, given Mutebile’s expansive experience and knowledge of economics and particularly Uganda’s economy.

Following news of his passing, several eminent Ugandans and economists extended their condolences to the nation and the professor’s family.

Prime Minister Robinah Nabbanja described the departed governor as “a great economist, a true nationalist and patriotic Ugandan who dedicated many years of his life to serving the country”. Speaker of parliament, Jacob Lokori Oulanyah, hailed Mutebile for his meritorious service as Governor Bank of Uganda, while Faruk Kirunda, the Deputy Press Secretary to H.E the President, mourned the loss of “an icon of Uganda’s fiscal health; a man of immense wisdom.” On his part, Vision Group CEO Don Wanyama remarked that “A giant has rested”.

The governor’s death also hit the economists’ fraternity deeply. George William Nyombi Thembo, one of the best economists this country has, noted that in Mutebile, the economists have lost “a mentor and public policy giant”.

Mutebile’s loss will also be felt beyond Uganda, with his illustrious career spreading far and wide.

Bank of Tanzania appreciated Mutebile’s transformation of the economy during his reign at BoU. And in a condolence message to Uganda, Dr. Patrick Njoroge, the Governor Central Bank of Kenya described Mutebile as a courteous man who helped to ease him into the governor’s job due to the “many courtesies he extended to me”.

Njoroge hailed the fallen economist for providing able leadership to the Monetary Affairs Committee (MAC) of the East African Community which Mutebile chaired in 2017 and 2018.

Apart from his professional excellence, Mutebile leaves behind a legacy of being a witty, honest, generous and bold man who feared nobody for as long as he was convinced he was doing the right thing.

This was highlighted by Premier Nabbanja who noted that “he was also a generous man who supported many initiatives in church, communities, education and the private sector.”

Meanwhile, Mutebile’s witty character is detailed in Dr. Njoroge’s condolence letter thus: “As the current chair of MAC, I also extend the heartfelt sympathies of my fellow east African central bank governors. We will miss his wise counsel, experience and gentle humor.”

Mutebile has also been an incorruptible man who did not shy away from standing up to the establishment. He will be remembered for threatening to resign if government dared spend the oil money recklessly.

“I will ensure that oil money is spent on agriculture and infrastructure and not in consumption….if that money is badly used, I will resign because I cannot be party to corruption,” he said in 2010.

Mutebile has been the governor of the Bank of Uganda for the last 21years. He was born in Kabale, South Western Uganda in a peasant family of 9 children and is survived by one wife, Betty Amooti Mutebile and a son, Duncan Tumusiime. He studied at Kigezi College for “O” Level, Makerere College School for his “A” Level and joined Makerere University in 1970 to study Economics and politics. He was elected guild president during his time at Makerere but was forced to flee Uganda in 1972 after his criticism for Idi Amin’s expulsion of the Indians. He fled to England through Tanzania, and was able to finish his studies at Durham University. Mutebile also studied at Balliol College, Oxford. He lectured and conducted research at the University of Dar es Salaam while pursuing his doctorate in economics. In 2009, Nkumba University awarded him an honorary doctorate of philosophy for his contribution towards the development of the Uganda’s financial. Fare the well, Patriot!!