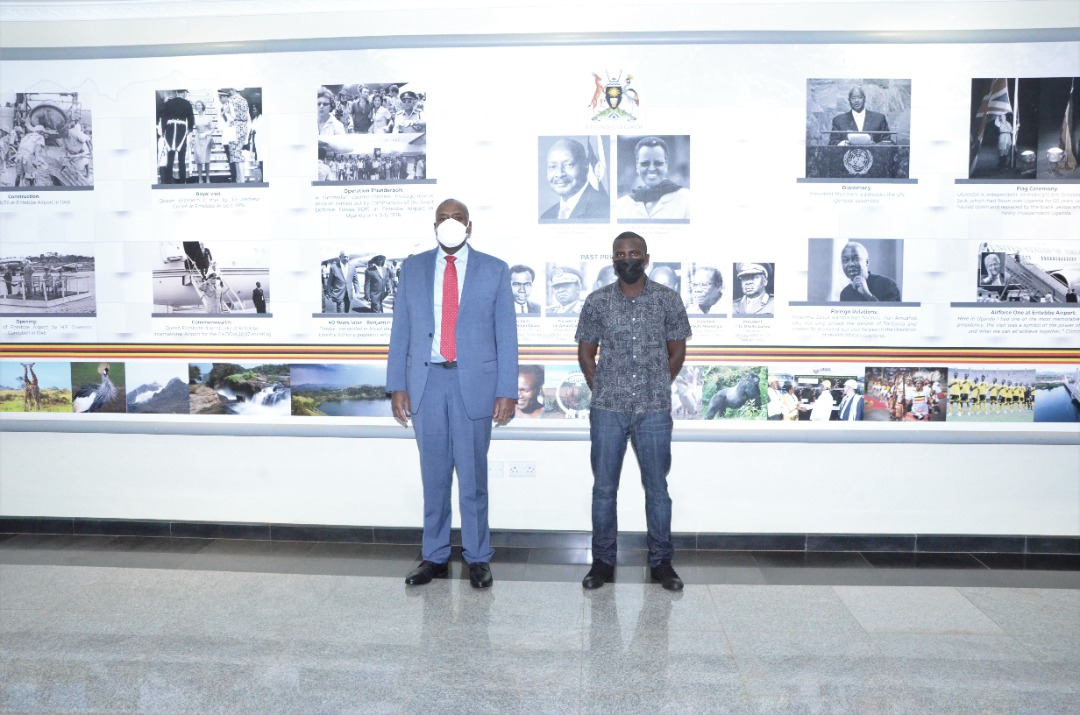 Gen. Muhoozi with Arinda who was pardoned

As per tweets by Muhoozi, soldier Pte. Ronald Arinda got arrested by Rwandan authorities after he ‘strayed’ into the neighbouring country’s territory on personal business. Since then he has been held in Rwanda, with the recent strained relations between Kampala and Kigali not helping his cause.

However, Muhoozi— a self-proclaimed true descendant of the mighty Bachwezi— revealed that he managed to talk President Kagame into pardoning and releasing Arinda.

“I thank President #Kagame for honouring my request to release our SFC soldier, Private Ronald Arinda, who strayed into #Rwandan territory on personal business without permission. I returned with him tonight to #Uganda. Longlive the friendship of the 2 countries,” -Gen Muhoozi tweeted.

Muhoozi, who is both senior presidential advisor on special operations and Commander of the UPDF Land Forces, flew to Kigali on Saturday to hold bilateral talks aimed at improving the neighbouring countries’ relations that have been strained for long. The poor relations have led to the closure of the Uganda-Rwanda border for a long time now.

Observers however believe that Kagame’s good reception of President Yoweri Museveni’s son is a concrete indicator that the current fences will be soon smoothly mended.

This was also confirmed by Muhoozi, who tweeted thus: “I thank President

@PaulKagame for the very warm reception my delegation and I received in Kigali today. We held very cordial and in-depth discussions about how to improve our bilateral relations. I’m confident that under the leadership of our two Presidents we shall be able to quickly restore our historical good relations.”

In their statement, the Rwandan presidency also confirmed that the two countries are looking forward to restoring bilateral relations. “President Kagame and General Muhoozi Kainerugaba had cordial, productive and forward looking discussions about Rwanda’s concerns and practical steps needed to restore the relationship between Rwanda and Uganda,” the Rwandan presidency said.

The Saturday meeting however, seems to be a culmination of underground discussions for cordial talks between president Museveni and Kagame.

Evidence of this is contained in a January 16, 2022 tweet in which Muhoozi referred to president kagame as his uncle. Posting pictures of Kagame, Muhoozi wrote, “This is my uncle, Afande Paul Kagame. Those who fight him are fighting my family. They should all be careful.”

The First Son’s visit to Kigali however, drew mixed reactions, with sections of the general public interpreting it in varied ways. While NRM and Muhoozi Project promoters welcomed the visit as one grounding their man in diplomacy to prepare him for a future presidency, government critics believe it is a furtherance of the country’s institutional breakdown as a serving soldier has no business doing diplomatic work. These argue that if the idea was to restore diplomatic relations, then a minister for east African affairs would have executed the assignment.