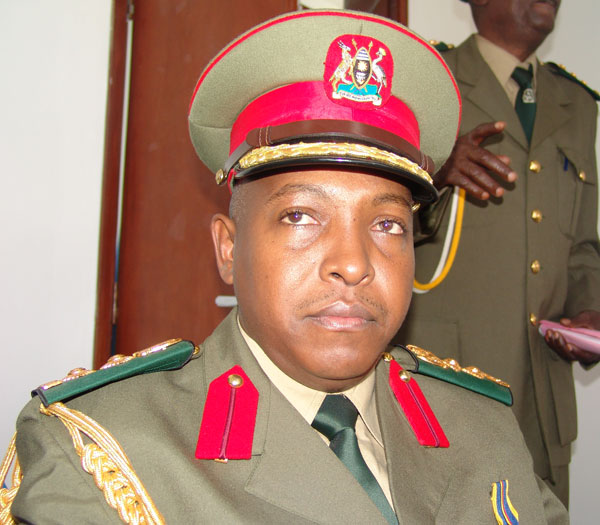 He was a powerful man who enjoyed power by all standards!
However, whereas he was too powerful, potholes have proved to be more powerful than him now that he is no more.
This is none other than the late Brig. Nobel Mayombo; the man who once presided over the army’s intelligence agency-CMI and later became the PS ministry of defense before he died of acute pancreatitis in May 2007.

Whereas he might have passed on, his name among his tribesmen; the Batooro in Kabalore district is still ringing a bell.
As such, eight years ago, his tribesmen went to meet president Yoweri Museveni at his home in Rwakitura. This was in 2013, six years after his demise. The group we confirmed among other demands to the president, asked for the tarmacking of the Fortportal-Kijura road; the road leading to his burial grounds and also connects to other places.

This same road is the one which takes the coordinator of COVID-19 taskforce Maj. Gen. Robert Rusoke to his home and so is Brig. Ronnie Balya the former DG of internal security organization (ISO).

The list is endless.
Now, our Inspectors reported that this road is soon turning into a crater lake of sorts arising from the massive potholes that are about to turn into fish ponds.

Ironically, Museveni following his meeting with the Tooro elders in 2013, penned a letter to then works minister Eng. Abraham Byandala to have this road together with two others worked on by way of tarmacking them. The other two roads included Fort portal-Katijo-Muhoti-Mountains of the Moon university road and Kasisi-Rwaihemba-Kyanga road.

In his letter obtained by this news site Inspectors, Museveni directed Byandala to work on these roads as a matter of urgency and also keep his office posted on the progress.
Dated 4th/September/2014, Museveni through his then PPS Mary Amajo said that ‘this letter serves to convey HE directive to you and to request you to keep the office updated on the progress’

Shockingly, this directive has up to now continued to gather dust in the works ministry. Four ministers including Byandala, John Byabagambi, Azuba Ntege and now Gen. Katumba Wamala have since presided over this sector but nothing to show in regards to Museveni’s directive on this Mayombo road.

“Since Byandala, Byabagambi, Ntege and now Katumba, no action has taken place. Sadly, even the area MPs from Kabalore are sleeping without opening their mouths to bring it to the attention of Parliament” says a senior elder from Fort.
The elders are now frustrated thinking that maybe, the directive was ignored because it was not written directly by Museveni himself.

“He(Museveni) didn’t sign the letter. The ones he signs himself are usually taken seriously and acted upon” opines a senior elder.
Another member shoots that ‘I doubt if the lack of his signature has anything to with the effecting of the directive. This would have been effective if it was another region with or without his signature’

This road is 30kms but goes into tourism minister Col. Tom Butime’s Mwenge constituency in Kyenjojo district by 15 more kilometers before it joins the newly constructed Kagadi-Kyenjojo road.

On the business angle, this Mayombo road is the one that leads to the lucrative area with many tea factories, coffee, matooke among others. The road also goes to Kyembogo Industrial Park and to the first famous model village of Rwengaju. Watch this space!