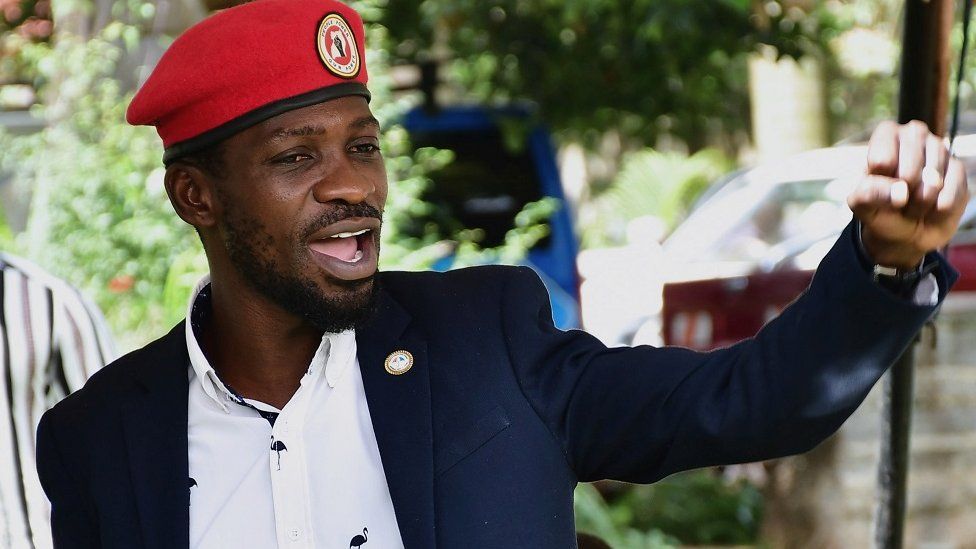 NUP principal Robert Kyagulanyi alias Bobi Wine and FDC strongman Kizza Besigye are reading on different pages as regards strategies to oust Gen. YK Tibuhaburwa Museveni. Besigye launched his Red Card Front which Bobi and his NUP have shunned. A verbal artillery between NUP and FDC is live now but no one has dared reveal why Bobi has given cold feet to this new Besigye outfit. What went wrong?

In 2017, when Robert Kyagulanyi alias Bobi Wine came to parliament, a senior opposition member of parliament representing one of the constituencies in Kampala approached him.
The male Muslim legislator who had served for two decades allegedly sat Bobi down and assured him that if he wanted to remain MP forever, he needed not to antagonize Gen. YK Tibuhaburwa Museveni.

“Bobi, you have come here. You know the trick many of us have used to stay for 20years?” The MP asked Bobi after a parliamentary session to which Bobi responded saying he didn’t know the trick.
“Oh yeah, if you want to be here like many of us have, don’t dare antagonize that man” the member allegedly told Bobi who remained inquisitive until the member mentioned Sevo’s name and full titles and rank!

Bobi according to what we got from our inspectors looked at the member several times with widely open eyes before bursting into rib-breaking laughter!
We are informed the member left that evening quite sure that he would deliver Bobi to NRM boss after all, he had proved to be so strong after resoundingly defeating NRM in Kyaddondo East by-election.

Unknown to him though, inspectors said Bobi went back and confided in his close pals including Nubian Li; the main strategist saying thus: ‘I really laugh at Uganda’s opposition. Can you imagine someone claiming to be opposition but was telling me not to talk about Museveni? And these are the guys Besigye has been working with?”
So determined the member was to deliver Bobi, that he was among the first lot to accept People Power Movement and was ever donning the Red Beret!

The member however, only suffered a setback as he failed to get the NUP flag and ended up going independent.
Inspectors revealed that as presidential campaigns went on, senior opposition party members held a meeting especially those that had membership in the Interparty Organization for Dialogue or IPOD. Here, a SWOT analysis of the political situation was done and it was clear that Bobi had given a challenge to Museveni.
However, a senior member from JEEMA allegedly opined that even if Bobi had won with 99.9 percent, he wouldn’t be declared winner by the electoral commission. The member suggested that the EC was going to declare NRM candidate and incumbent president Museveni.

Therefore, a strategy was laid for what was baptized as plan B.
In this plan, inspectors stated that the opposition parties under IPOD (then) focus on causing a coalition government with Museveni while Bobi struggled with his regime change antics.

“The truth is that, the support is there. It’s massive but not enough to decisively defeat Museveni. What we can only do under the circumstances, is to force a power sharing government with Museveni” an inspector in JEEMA said.
In the plan, inspectors revealed the project envisaged having 30 cabinet seats going to the opposition out of the 86ministers. Of the 30 seats, the opposition parties were to share them and fill them with opposition boys.

Now, inspectors revealed this project is still alive within the opposition parties which feels that allowing Museveni to run the five years without coughing some top seats in cabinet to the opposition would be a bigger loss.
“We want to put Museveni on pressure so as to force a breakdown or power sharing. We know if he does this, most of us are looking for job placements. So, if he falls, the better but also sharing power is an alternative” an inspector revealed.

Inspectors suggested that the parties willing to cooperate with Sevo allegedly agreed that in case the man with a round hat was declared and no action is taken, that would mean the end of the opposition.
“Now that he was declared, what happens next? The events will determine the fate of the opposition. But truth is most of want jobs” an inspector said adding that there are some looking at being posted as ambassadors.

And yet, we understood that Bobi already had a second opinion on JEEMA and FDC. Apparently, prior to the formation of NUP, Bobi struggled to find a home to pursue his political career. Even his PPM had been taken over by NRM’s Balam Burugahare who registered it as a charity organization. On the other hand, UPC was moving swiftly to claim the Red color as its own and therefore wanted PPM to abandon it.

Left with no option, Bobi allegedly coined a move to have JEEMA unveil as PPM during their campaign agenda launch in Mengo prior to the general elections. To his dismay, JEEMA allegedly renaged on this promise and this irked Bobi who worked tirelessly to deliver JEEMA boss Asuman Basalirwa to parliament in a by-election in 2017.

In fact, inspectors revealed that because of Bobi, some giants in the system had wanted Basalirwa not to be declared winner until former deputy premier and EAC minister Haji Kirunda Kivejjinja (RIP) intervened and asked that Basalirwa be given his victory. This is how he finally got to parliament. Even when he came to parliament, his tormentors pursued him by suggesting that he together with other seven legislators had been voted illegally because their constituencies weren’t gazzeted. In the ensuing project, inspectors suggest Basalirwa was approached and allegedly requested to reduce on his alliance with the now NUP principal Kyagulanyi alias Bobi.

Apparently, Basalirwa was running an empty bank account and was embroiled in debts accruing from campaign demands. Therefore, in order to reduce pressure on him, somehow after high court had thrown him and seven others out of parliament, he was cornered into a political fix. When it was confirmed he wasn’t politically involving himself with Bobi regularly, this is how the matter went to court of Appeal and it quietly died there until the term ended.

Inspectors revealed that when JEEMA dodged PPM unveiling, this is why, Bobi hurried to launch PPM at Kamwokya almost on the same day after JEEMA flopped launch. We are told this history still rings a bell in Bobi’s head; the reason he snubbed Besigye’s Red Card Front launch. The launch took place with JEEMA playing a central role and brought together other parties including FDC, CP and rebel DP stalwarts. Bobi has since refused to join it with NUP supporters describing the Red Card Front as a state sponsored outfit. However, the frontiers deny this and call it regime propaganda. Efforts to pick a word from NRM secretary General Rt. Hon. Richard Todwong were futile as he was in a cabinet retreat. Watch the space!