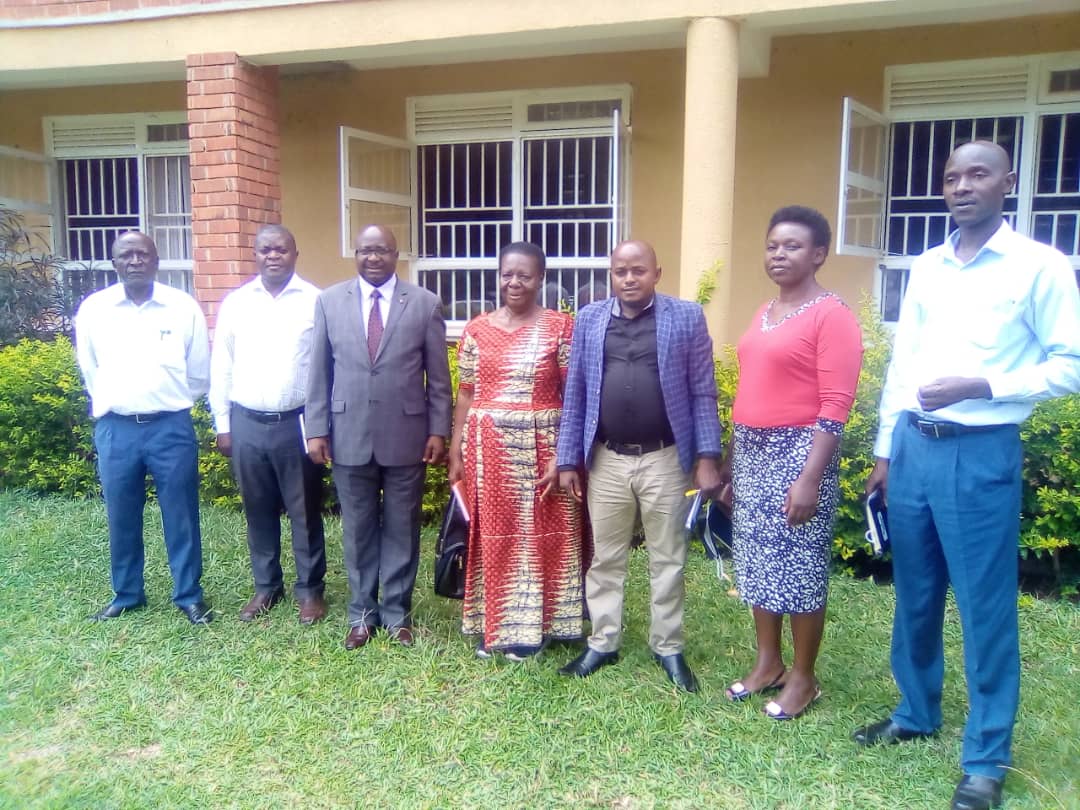 SPA Mutyabule poses for a photo with Mayuge district leaders

The National Animal Genetics Resources Center and Data Bank (NAGRC DB) has been urged to bring back the program of training Artificial Insemination Technicians.

The call was made by district leaders from Namayingo district during their meeting with the Senior Presidential Advisor on Busoga in charge of Poverty Alleviation Hon Florence Mutyabule. The SPA is currently undertaking a regional sensitization campaign among all district leaders of Busoga on Kasolwe Stock Farm Project, it’s services and products. The farm according to Mutyabule is to benefit the whole of Busoga sub-region.

The SPA yesterday met district leaders of Mayuge, Namayingo and Bugweri over the matter and also gather their views on how best the farm can be utilized to enable locals get services from it.

In Namayingo for example, the leaders welcomed the idea where NAGRC &DB offers districts with semen under the community bleeding program to enable them give to farmers to improve on their livestock breeds. However, the leaders led by area RDC Ogajo Sulaiman said; much as this arrangement is there and noble, they face a challenge of lack of AI technicians. The District Production Officer Dr. Batwala Stephen explained that in his district, they have only two such technicians including himself which he said is a big challenge.

“NAGRC DB at Entebbe used to have a program of training AI technicians but the service is no longer there. Even when we can train on our own (funds), we have nowhere to train them because even at NAGRC DB, this service is not there now. If NAGRC DB can bring back that service, we shall be able to tell our farmers to use imported semen to improve on their breed” he said.

The leaders noted that AI is the simplest way to improve on breeds and therefore they need to have qualified people to handle this exercise.
Dr. Batwala said currently, those individual farmers with good breeds of cattle are charging exhorbitantly those who want to buy their cows. He said this can only be cured if the sources of improved breed are fast tracked to enable farmers access these breeds at affordable prices.

In Mayuge, the leaders led by district chairman Bishop Frank Tibagendeka said as a district, they had identified dairy and cocoa growing as key projects that can help transform people’s lives.
“For dairy, our challenge here is getting the right seed (breed). My worry is that NAGRC &DB may not have the numbers so that when we recommend farmers, they can get the breed” he said

The district fisheries officer Nakaziba Sarah told the meeting that Mayuge has waters but they lack cages, fishing gear like boats and feeds especially the youths.

“We want to reduce pressure on the lake by trying other ways of fish farming especially cage farming. But people lack cages. Even the cost of feeds if failing many farmers in this business. We are greatful about Kasolwe and this meeting has helped us understand that there’s even a unit for fish farming. We thought it is strictly about livestock farming. It’s going to promote fish farming. Our main challenge is the feed. Kasolwe should work on the feed fast because farmers are complaining about the cost of the feed and standard. NAGRC DB should work on feed fastly and be of standard” she said.

Meanwhile, the leaders in Bugweri district led by RDC Billy Janet Mulindwa, emphasized the need for Kasolwe Stock Farm managers to open up on its services so that people can understand it well.
The DPO Dr. Kalange Muhamudu for example said most district leaders are unaware of Kasolwe Stock Farm services and how they will help the community.

“We need to do a lot of sensitization about Kasolwe. Even me, I am in the system as a technical person but I have been wondering how the farm will help people. Are they going to give things for free?” He asked, adding that already as a district, Bugweri is getting semen from Kasolwe Stock Farm but that’s where they end. Like in Namayingo, they complained about lack of government AI officers to do the AI service and therefore rely on private people.

“They (private people) come, we give them thw semen to go and inseminate and give us a report after” he said.
The meetings were attended by the RDCs, DPO, DAO, CAO, LC5 chairmen, DISO, and other officials at the headquarters of their respective districts. Mutyabule urged them to make use of the farm and pledged to take the leaders to Kasolwe Stock Farm for on-spot appreciation of it’s services and products.