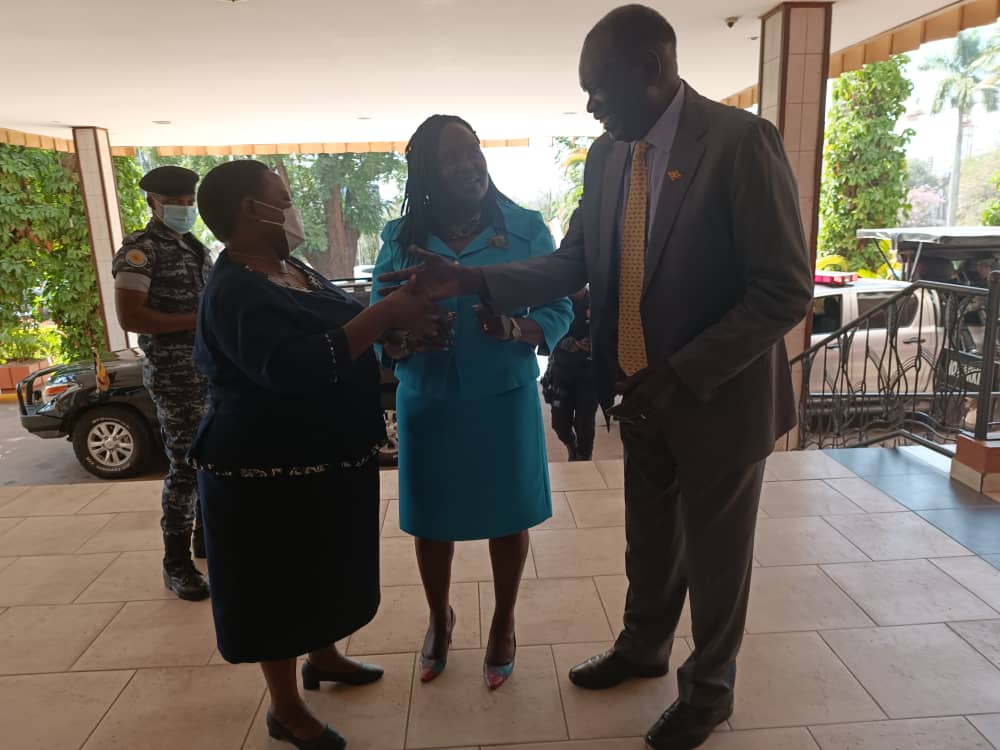 The two cabinet gurus were recently involved in a nasty exchange of words with Onek accusing his senior of intruding into his docket’s work. However, in a dramatic show of reconciliation and unity of purpose, the two principals buried their hatched as they launched a program for energy targeting refugees and host communities.

“Onek greeted Nabbanja and the two shook hands briefly as they laughed. It’s as if they are back to talking terms. They greeted each other as Nankabirwa cheered on. By the look of things, they seem to be rhyming now” says an inspector at the hotel.
The Premier and Onek alongside Nankabirwa and other dignitaries were at Serena hotel to launch a new government’s sustainable energy response plan for refugees and host communities.

According to Nabbanja, this program is intended to respond to the development of refugees who flee to Uganda in search for peace and security.
“Our brothers and sisters flee from different respective countries to Uganda to search for peace and security so we must give them good services. Since 1950’s Uganda has been hosting them (refugees) todate and Uganda has over 1.5M refugees who have different issues” Nabbaja said
The premier said this is another plan targeting refugees after that of 2021 which was launched dubbed ‘jobs and livelihood response plan’.

She said that the latest plan aims to address environment and climate change, adding that in 2019, a program on both education and health was launched and so was another program launched in 2020 which tackled water and environment.
Nabbaja added that responding to the needs of refugees can’t continue to focus on humanitarian and relief components alone but government must ensure that it integrates the development approach to provide a long term solution to refugees.

She directed energy minister Nankabirwa to transmit power to refugee settlement areas to attract investment and job opportunities for them.
Meanwhile, Nankabirwa described the launch as timely as her ministry is kick starting the electricity access scale up project with support from world bank.

“This project is a component on providing sustainable energy to refugees and host communities has been included to be implemented by the ministry of energy and Uganda energy credit capitalization company (UECCC)” the minister said.

She added that Uganda has a very huge population of refugees totalling to about 1.5m people.
“They exert pressure on natural resources, pressure on forests because they look for firewood for cooking among others but this strategy will help government to reduce on pressure by coming up with alternative on cooking methods to reduce on cutting trees by providing them (refugees) with solar for lightening” the minister added.

Nankabirwa also said that this program also developed in alignment to improve sustainable access to energy for cooking, lighting and productive use for households (refugees)
In another development, Relief and disaster preparedness and refugees minister Hillary Onek says that energy is fundamental in the development of the country.

“This program is not only for the refugees, but also other people neighbouring them. We need energy for cooking, lightening among others. We really need this program to restore back the environment. This program must be implemented so that private sectors can extend services to people” Onek said