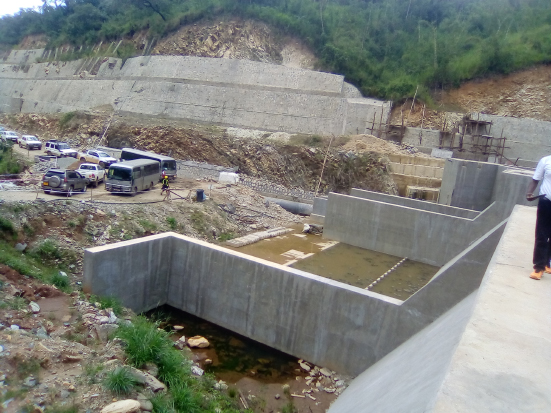 MPs sitting Parliamentary Committee on Natural Resources and Environment nearly collapsed on their faces after learning that government is constructing what some termed as a ‘white elephant’ in form of a power dam on Nyagak river.

Baptized as Nyagak 3 project worth USD19m, the dam that is supposed to produce 6.6MW has no power evacuation line.
This according to the Committee, is a fertile ground for tax payers to pay for what members termed as dim energy.

Dim energy is power generated but it is not consumed as there’s no way it leaves the plant to reach the users.
While touring the project, the committee led by West Budama-South MP Dr. Emmanuel Otaala tasked the contractor (Dott Services Ltd) to explain how power will leave the plant but the answers remained known to the contractor.

The contractor claims that civil works at the dam is at 82% completion although Otaala diagnosed it and put it at 63%.
Dott Services Ltd however, assured the Committee that the project’s completion is being humpered by government itself as it has continued to sit on Shs22bn meant to facilitate completion.

“What’s delaying you to complete this work?” Otaala asked to which the contractor blamed it on government.
“Funding from government. We are asking for Shs22bn. Expected completion date is in March next year. We’re on course with civil works in spite of the financial challenges. So, if the money comes, we’re going to expedite ” the site manager said.
As he said this, the members asked him to explain how the power will leave the plant but nothing in form of an answer came out.

“Nyagak 3 is on course but we are disturbed that there’s no evacuation line. I am seeing another risk of us paying for dim power. We don’t want to end up paying for power generated but not used” Otaala said.
He said Nyagak 3 is at 63% completion adding that if government makes it’s part of the bargain, that will be good.

“The complaint (by the contractor) is that government has not made it’s part of funding. We have information that this matter is before the Solicitor General. We’re going to put pressure on Solicitor General. However, that funding (22bn) should be done provided; there’s an evacuation plan for the power” he said.

The committee tasked Dott Services Ltd to submit all documents related to this project by Monday next week.
“We need an evacuation plan. We don’t want this situation of paying for dim energy. There must be a plan to take power from the plant. We’re going to complete the dam but there will be no transmission line to take the power” he said.

The committee now wants UEGCL to appear before them and explain in detail how it intends to evacuate the power now that nothing of that sort is on the ground.
The same members want Dott Services Ltd to tell members on what they are going to do for the community as part of the Corporate Social Responsibility.

“Is the developer going to put a good school, is there adequate compensation, are you putting in place bridges? This is when the community will feel that they own this project” he said adding that currently, there’s no sign that CSR is catered for and yet the project is going to remain with the wanaich.

The committee spent the whole of this week in west Nile trying to assess electricity performance in the region, the projects being undertaken and those already running.
They visited Nyagak 1 and found that the project is fully running with all it’s turbines in spite of the rumors taken to the speaker of parliament Anita Among by some groups in West Nile that Nyagak 1 wasn’t functional to full capacity.

“We have found both units functional and are producing 2.3MW. On of the turbines thought to be down is functioning properly. Both units are working and this disapproves allegations that the turbine was faulty. It’s working” he said after being taken around the dam by WENRECO general manager Kenneth Kigumba.

During one of the public hearings at Muni university hall, some participants led by former woman MP Arua Christine Bako Abia hinted on a plan for the region to secede citing ‘marginalization’.