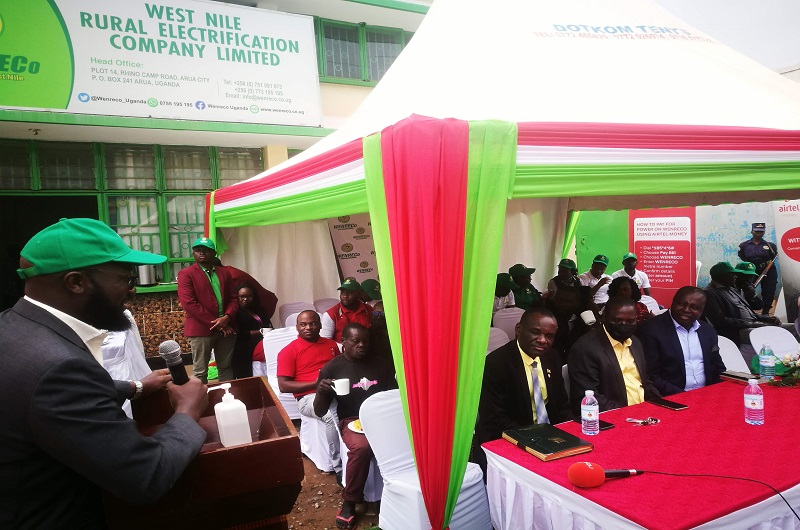 ARUA. Documents showing the transactions between West Nile Rural Electrification Company (WENRECo) and a local technical company in Kampala aimed at repairing the faulty generator at Nyagak power dam have leaked to The Inspector Website.

The transaction signed by Eng. Kenneth Kigumba, the WENRECo General Manager shows that millions of Ugandan shillings was put to waste following the failed repair of the generator, nearly eight months down the road.

As a result, Nyagak power dam with power generation capacity of 3.5MW is only generating a meager 1.75MW power for the people of West Nile.

The situation has since led to uncalled for power outages in the region thus attracting the attention of Annet Among Anita, the Speaker of Parliament.

Anita held two meetings with a group of power activists from West Nile who are now demanding the government to connect the region to the national grid and also terminate the contracts of WENRECo and Electromaxx for failing to fulfill their obligation.

In the leaked documents, WENRECO received two offers (Quotations) for the repair of the generator in question. WENRECo first received a quotation dated January 24, 2022 from API TECHNICAL SERVICES LTD located in Bugolobi, Kampala and also received another quotation dated January 27, 2022 from Mavel, a company which is based in Benesov, Czech Republic. Mavel is the manufacturer of the spoilt generator at Nyagak.

In the quotation, the manufacturer offered to repair the generator and fit all its necessary spare parts at a tune of USD90,610 (about UGX351,669,530) meanwhile the quotation of the local company, API TECHNICAL SERVICES LTD to repair the same generator was UGX662,036,208 with additional charges of UGX37,419,869.

Interestingly, despite the huge quotation, almost doubling that of the manufacturer, the WENRECo management decided to award the deal to API TECHNICAL SERVICES LTD.

This is evidenced by some of the payment transactions between WENRECO and the company under the authorization of the General Manager.

However, since the beginning of the year, API TECHNICAL SERVICES LTD has failed to repair the said generator after chewing millions of shillings from WENRECo, a reason the region is still struggling in darkness.

It is not yet clear whether the local company purchased the required spare parts or not as answers were not readily available from Kigumba on what exactly went wrong with the deal.

But after the Tuesday meeting with the Speaker of Parliament, a motion was the following day brought to the floor of the House to discuss the wanting power situation in West Nile.

Moved by the pain occasioned by the unreliable power in the region and most especially at Arua regional referral hospital, the Speaker committed to install a functional solar system at the facility by the end of this week as the government continues to pursue a lasting solution to the power issues in West Nile.