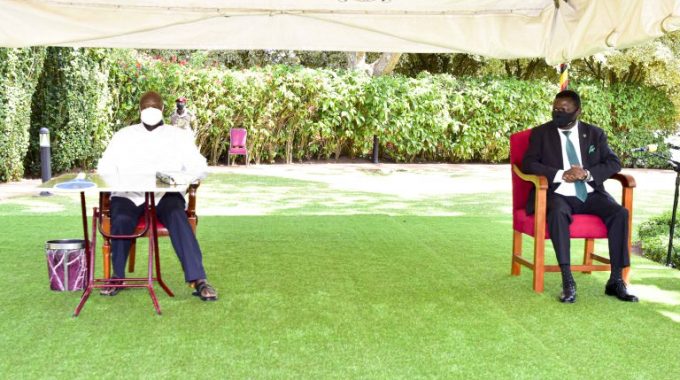 Following his victory in the 2016 general elections, President Yoweri Museveni declared that he was tired of the opposition politicians’ confusion.
As such, he announced plans to vanquish the opposition by 2021, vowing that by that timeline it will be no more! If anyone doubted the son of late Amos Kaguta, all indications are that while the 2021 timeline has been a little bit extended, Museveni has achieved his wish-cum-threat. Since 2016 to date, hundreds of former opposition politicians have crossed to NRM either directly or indirectly. Museveni’s haul includes party founders like Beti olive Namisango Kamya (BONK),

Abed Bwanika and now Norbert Mao who have directly crossed to NRM; on top of others former bigwigs like Betty Anywar, Joyce Ssebugwawo, Betty Amongi, Anita Among, and Thomas Tayebwa among others who are now loyal NRM servants.
The last category is that of hitherto opposition radicals who have chosen to ‘remain’ in their old parties but have since toned down following inducement from NRM’s methods of work. This lot has the likes of Mathias Mpuuga, Cecilia Ogwal, Kato Lubwama, and Ken Lukyamuzi among others.

DP BURIED
Uganda’s oldest political party — the Democratic Party — started the walk to its ‘grave’ following a pact its President Norbert Mao signed with would-be nemesis President Yoweri Museveni of the ruling national Resistance Movement (NRM) Wednesday evening.
This, at least, is as per sentiments raised by top opposition politicians, particularly Kampala City Lord Mayor Erias Lukwago and Dr. Kizza Besigye of Forum for Democratic Change (FDC).
Several politicians took to their social media pages to express their opinions following news of a Memorandum of Understanding which DP signed agreeing to work together with the ruling party.

The MoU was signed at NRM national chairman, President Yoweri Museveni’s official residence at state house, Entebbe, and he confirmed the same moments after putting ink to the dotted lines.
In a July 20, 2022 tweet posted at exactly 6:38pm, Museveni confirmed the new agreement.
“I met with Democratic Party president Norbert Mao at state house Entebbe. We signed a cooperation agreement between NRM and the DP,” he said. He also thanked Mao, who was flanked by the party Secretary General Siranda for “this gesture of mature, foresighted and constructive politics.”
Although the two parties did not divulge much of what the new agreement specifically entails, the Government of Uganda official twitter handle revealed that the “agreement will help the two parties to concentrate on Nation building, and promoting democracy and responsible citizenship.”

Speaking after the signing, Mao on his part lauded the step as unprecedented, saying that it was good for the future citizens of the country.
“Your Excellency, you now have the historical opportunity to gather patriots that are scattered all over Uganda. You must look for them wherever they are. They are in all the political parties, they are in all corners of Uganda. This to me are opportunities to be enjoyed by perhaps the unborn children… This is an unprecedented step; there has never been something like this,” Mao said.
The signing essentially means that after 68 years of being a pure opposition political party, DP will now either become a moderate opposition party, pseudo branch of NRM or even get absorbed into NRM.

OPPOSITION POLITICIANS MOURN
As expected, several opposition politicians who identify under the limping Forces of Change ideology bemoaned the new pact, opining that it is the last nail that has been long awaited to seal the political coffin of DP.
It should be noted that ever since he assumed leadership of DP from late Ssebaana Kizito, Mao has been at pains to convince the party faithful that he meant well for the party. In fact, it is because of such pessimism which has seen DP split into several factions such as Suubi, DP-Buganda etc. Similarly, the party has lost strong politicians like Mathias Mpuuga, Betty Nambooze, Erias Lukwago, Lubega Mukaaku among others, who all accused Mao of being a Museveni mole. Sometime last year, Mao engaged in a memorable quarrel with MP Betty Nambooze, labeling her a watermelon which was green (DP) outside but red (NUP) inside. In retaliation, Nambooze also branded Mao a pumpkin which was green outside but yellow (NRM) inside. It now remains to the public to judge whether Mao has simply decide to flip the inside part of the pumpkin!

Following news of the pact, FDC strongman mused thus “Hmmm…kale, bye” while bidding farewell to DP. Similarly, his right man Erias Lukwago was even more direct, imputing that DP was dead “Kitalo nnyo!!! Born 1954 and…” Lukwago remarked on his Facebook page. Nakawa West MP and NUP spokesperson Joel Ssenyonyi termed the pact as a new marriage which had simply been finally made official after years of flirtation between Mao and NRM. “The “cohabiting” has ended, here is the “wedding”,” he said.

It is now common knowledge that Mao and NUP are sworn enemies, with Mao recently taking every single opportunity to poke holes in NUP and discredit its leaders especially Bobi wine of being fake politicians without any vision or ideology — an opinion which is identical to president Museveni’s on the same matter.
Intriguingly, even some NRM stalwarts found the pact peculiar; for instance Kasambya county MP David Kabanda who tweeted DP’s official emblem and captioned it as “SOLD”.

Bobi Wine’s shocking revelation was made in his End Of Year 2021 Message to Ugandans. Explaining NUP’s seeming aloofness then, Bobi said he and his party decided to take a loner’s approach after realizing that the opposition space in Uganda is full of self-seeking, sabotage and untold betrayal of the cause by greedy members.

Getting specific, he cited an example of former FDC strongwoman Joyce Nabbosa Ssebugwawo who he said always revealed details of their meetings to President Museveni.
He also revealed that many other opposition politicians don’t like NUP and fight it simply because they feel it has taken the shine off them. They are thus fighting to collapse it by siding with the NRM which they claim to oppose. Bobi Wine’s address came a few days after he revealed in a TV interview that he is aware that there are many NRM moles even in NUP:

Below is an abridged verbatim version of the message which predicted an MoU like Wednesday’s:

Fellow countrymen and women… As we come to the end of the year, my message will focus on three issues:

By the time we went through the election and emerged out of it, we got credible information, (which is well within the knowledge of senior leaders), that Museveni sponsored several candidates at different levels in order to cut our speed …
Immediately after the election, every Ugandan remembers that I personally wrote to all heads of political parties, in order for us to forge unity and take the struggle forward. Yet again, some actors responded positively, others responded negatively and others did not respond at all.

MAO DENIES BEING M7 MOLE
It is however important to note that for a very long time, Mao has denied working with president Museveni (or being his mole). For instance in a recent interview with the NilePost news website last year, Mao remarked as follows when accused of the same:
“Who has not been accused of working with Museveni? Actually, that is the real problem. We have never accused anyone of working with the regime. When pastors are quarrelling, they accuse each other of practicing witchcraft, in the same way some of the opposition leaders think that if you don’t agree with them, or you don’t support their cause, then you must be NRM. But a person like me is not moved by that. The reason they accused us is because we are willing to engage with the NRM and President Museveni through the formal forum like the Inter Party Organisation for Dialogue, IPOD,” Mao said.

He added, “We believe that it is important that in designing a post Museveni Uganda, all people deserve to have a say. Those who are not moles; why haven’t they removed the regime? Do they think we will complain, if they remove the regime?”