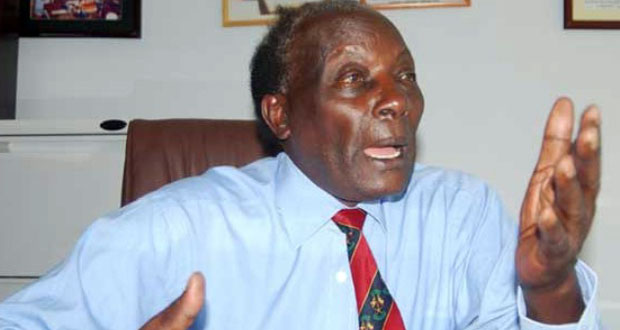 President Yoweri Museveni is under multi-pronged attack from various corners over his proposal to scrap bail and bond for certain criminal offenders of a serious nature like murderers. One of the fronts is a legal challenge via a petition filed by former Supreme Court judge, Justice George Kanyeihamba, and other (students and activists).

In a lawsuit filed before the Constitutional Court last Monday, Kanyeihamba sued Museveni alongside Attorney General Kiryowa Kiwanuka, and the ruling National Resistance Movement (NRM) party, accusing them of “threatening to violate the fundamental laws of Uganda and intending to alter the constitution,” according to press reports.

Justice Kanyeihamba said his legal action is to prohibit “Y.K Museveni Tibuhaburwa, the National Resistance Movement party and its organs, Attorney General and his agents from altering article 23 and the Police Act or any provisions of the international agreement or protocols relating to the right for bail application, the hearing of which is in itself an absolute right guaranteed under the chapter 4 and article 23 of the constitution.”

President Museveni has been resolute about scrapping bail for suspects facing grave charges, reasoning that their release is a provocation to the victims, and a precipitator of mob justice due to frustration by members of the public with “indifferent and ineffectual” judicial processes that they regard as contempt of justice and dancing on graves of murder victims.

Nobody knows how many murderers are at large but there are fewer in jail than on the outside. The blood of victims cries out for justice to no avail as long as their killers know that they enjoy equal bail rights like those of chicken thieves and common offenders.

The above is what President Museveni is fighting to cure; to create a level ground between the offenders (murderers) and the offended (victims). Surprisingly, he is meeting resistance from persons who should rather be on the right side with him in the interest of protecting the rights of those whose voices are forever silenced while their assailants enjoy free reign in society alongside law-abiding citizens while hatching other similar or worse schemes.

To acquire bail, they usually corruptly influence processes and when they regain temporary freedom, they totally become untouchable, hardened and remorseless. Total defiance of logic in a country that is, otherwise, not lawless!
In short, these people who are dying to preserve bail for the most heinous criminals, whose interests do they serve and what do they want the public to think of them? Have they ever lost dear ones and felt the sting of unmet retribution?

For Justice Kanyeihamba, an elder, a man whose profile speaks for itself and whom I respect so much, his efforts are welcome but it is the wrong timing and approach. Kanyeihamba was a minister in the early years of the NRM, later serving as Attorney General, with a last posting as Supreme Court judge. He has also served in numerous other capacities of no mean level.

Despite that early connection to Museveni, Kanyeihamba has distinguished himself as someone who hates any idea that the president fronts. If there is any instance where he has supported him, well and good, but personally I don’t know any. He even always voted against him during presidential election petitions.

It is, therefore, my view that the good justice is the wrong person to take the measures that he has taken because he harbours something of personal vendetta against Museveni and should step aside from the important subject matter because it will be lost in the mist of a “latent feud”.

Justice Kanyeihamba’s case is premature, misleading and one-sided, and serving extraneous purposes. Rushing to court was intended to stifle debate and preempt other institutions and the public from discussing and finding deeper merit or none in either side-proponents and opponents.

It is an attempt to further intimidate and traumatise relations of victims from pursuing justice for their people. No one should stop the President from expressing his views for as long he is following the right procedure and not stopping others from doing the same fairly. Justice Kanyeihamba should instead engage Parliament rather than running to court prematurely.

The senior elder was also a member of the Constituent Assembly (CA) representing Rubanda West and I believe he was alert when certain provisions of the Constitution were entrenched and others not. The Constitution also provided procedural steps by which it can be amended, as and when.

Therefore, amending the Constitution has never been illegal or an abrogation, as anti-age limit amendment fanatics used to claim. What is Justice Kanyeihamba’s claim yet he wrote the Constitution?
Still, having served in the highest echelons of the judicial system, Kanyeihamba should have lent the best effort of his prime in helping streamline the judicial and attendant institutions to better manage capital offenders and stem the influx of serious offenders from jail, the courts and police stations, yet culpable.

That service would have greatly embellished his already impressive legacy and saved us the exchanges we are engaged in right now. That effort would have been most gratifying instead of the present public show of clout that threatens to undo his great profile as a “human institution” of law and justice, an elder who is an example to the young generation.

The matter of rubbing in the trauma and misery of injustice to victims versus impunity and joyrides for killer criminals is a great test of our times. Everyone will stand to be counted for their stance as moral creatures. Bail and human life, which is divine?
The author is Deputy Presidential Press Secretary