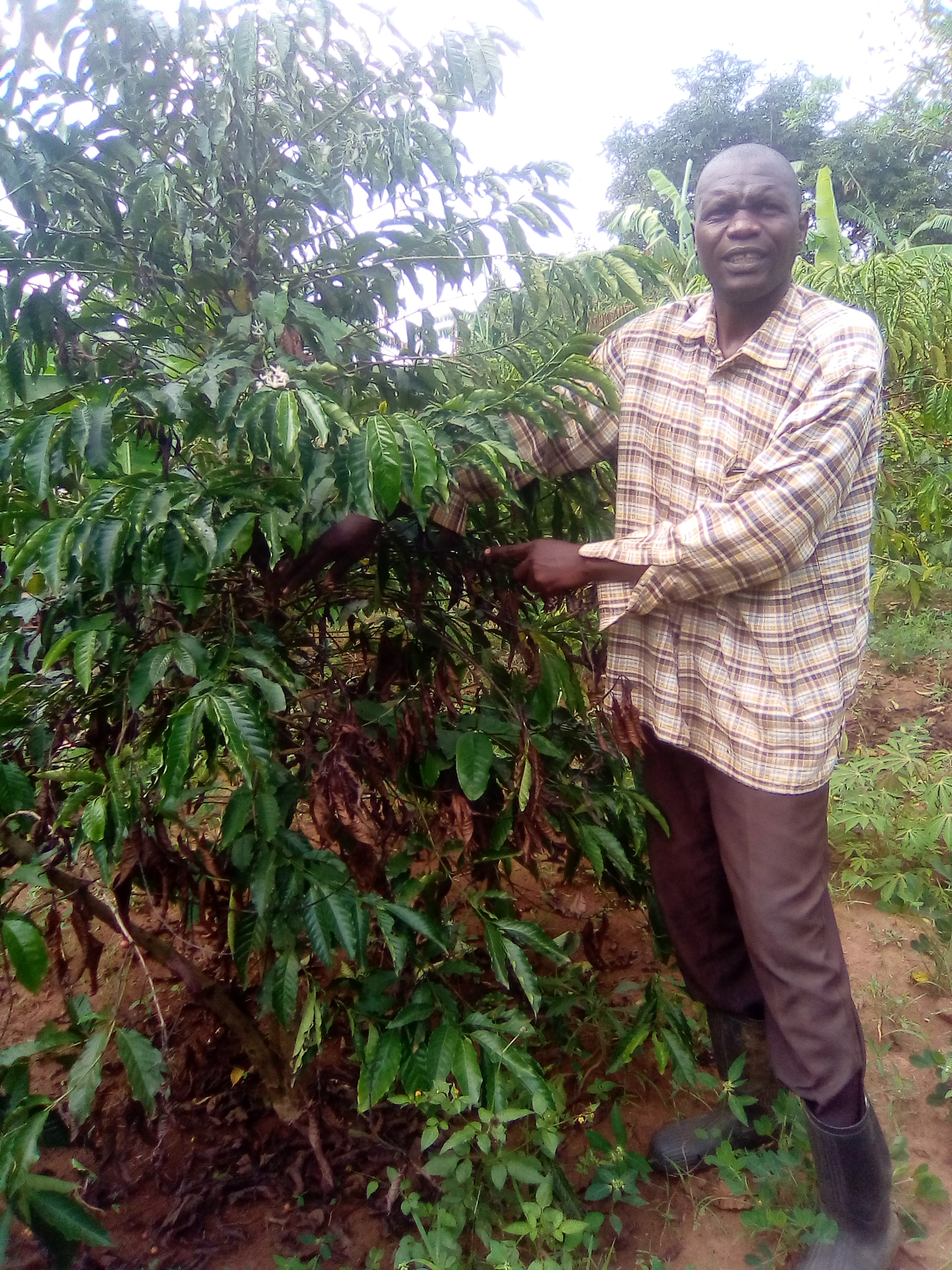 Ngobi shows one of the affected coffee plants to Mutyabule

Coffee farmers in Busoga sub-region have expressed concern after some of their farms have been attacked by a strange disease.

The wilt according to farmers particularly in Namutumba district attacks the plant and leaves it dry from top to bottom.
This came to light yesterday as the Senior Presidential Advisor on Busoga in charge of Poverty Alleviation hon Florence Mutyabule visited various farmers in the region to assess their progress and challenges they face.

In Namutumba district particularly at Nsoola village is a 30-acre coffee farm owned by George Ngobi a prominent coffee farmer.
The farm which was started in 2016 is however, causing daily misery to the budding farmer as some of his plants have started drying up as a result of a strange wilt.

“Many people have embraced coffee farming as an alternative to sugar cane growing. However, we are now faced with this disease. It attacks the plant and it dries up. We request government to give us pesticides to spray coffee” he said as he took Mutyabule around the vast farm.

To make matters worse, it was clear the agricultural extension workers in the region are next to non-existence because farmers claimed they lack knowledge on how to handle such outbreaks.

Ngobi said he joined coffee farming to teach others that Busoga was capable of producing other enterprises away from canes which he said has become everyone’s sole source of income. This, he said had caused a problem of over production and therefore affected market fortunes.

He also complained of lack of fertilizers, transport for farm inputs, harvesting materials like tappulins, jet sprayer among others.
He said the farm had become expensive for him to maintain due to lack of funds. He told Mutyabule that for now, he sells row coffee beans where he gets some little money.

“I don’t dry because I have no money. We just pick the coffee and sell immediately at shs800 per kilo. I have no capacity to dry the coffee” he said.
Mutyabule also visited other farmers including Pastor Dawson Musasizi who runs a model farm baptized as Busoga Farmers Resource Center.

Here, she found a group of clergymen and women undergoing a two-months’ training in intense farming. The clergies totaling 20 hail from 10 districts of greater northern Uganda including Gulu, Arua, Amolatar and Pader among others.
Addressing these men and women of God at the farm, Mutyabule encouraged them to utilize the acquired knowledge to transform their communities when they go back to their areas.

“I am humbled and challenged. Thanks for identifying someone from Busoga that he can help to train you. This is a place where people should be trained from. Mobilize others to come and I request you to go back and practice what you have learnt” she said.

The learners led by Rev. Patrick Lumumba from Gulu diocese encouraged clergymen to ensure their followers are assisted on matters of economic empowerment.
“This is the time religion should transform people holistically. People won’t listen to the word of God when on empty stomachs or when their butts are peeping through their rugged clothes. God wants happy people” he noted.

Mutyabule also visited other farmers and youth projects in the districts of Iganga, Jinja, Bugweri and Kaliro. She promised to take their issues to relevant government agencies and emphasized the need for Basoga to work for both the stomach and money in the pocket as the president wants.