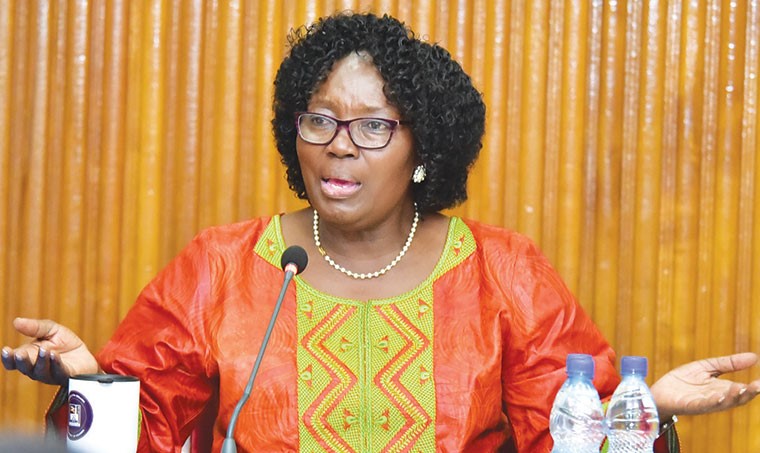 The minister however, has come out vehemently and denied the allegations suggesting that she isn’t interested anyway in the presidency of this country. Whereas Rt. Hon. Kadaga tries to downplay these allegations, something within the intelligence network says to the contrary. Kadaga according to the brief we landed on, seems to have been under security scrutiny for now a decade spanning from 2011.

Our Inspectors have gathered that intelligence already recommended that Kadaga be put under an intense investigation to see whether she was a threat to Museveni. The brief is entitled ‘IS THE SPEAKER KADAGA NURTURING PRESIDENTIAL AMBITION?’

The brief done sometime in 2011 in it’s first sentence seems to confirm that Kadaga is nursing presidential ambition. She was however, said to be mobilizing for 2016.
“The second national vice chairperson of NRM is clandestinely mobilizing for presidency come 2016 using opposition figures in parliament. Among them is Elijah Okupa, Nandala Mafabi, Sebuliba Mutumba, Mathias Mpuuga and Chris Baryomunsi; the NRM rebel MP from Kanungu and all parliamentary commissioners” the brief accessed by our Inspectors begins.

According to the Intel, Kadaga’s alleged last whistle was brown during her parliamentary outreach program for Bunyoro sub-region but organized in Kabalore district between December 21-22 2011. Here, she allegedly allowed MPs to castigate NRM for failing almost in every sector.

“This forced many disappointed NRM leaders to storm out saying the speaker wasn’t in any way in disagreement with what was being said” says the brief. It goes on to claim that as the deliberations went on, MP Gerald Karuhanga was allegedly busy meeting regional youth leaders delivering a ‘properly packaged message’ on youth unemployment and Uganda’s readiness for a female president.

“Information we have gathered needs further investigation because this is an internal matter” the report concludes.
The same report suggests that prior to the Bunyoro debacle, Kadaga had had a similar meeting on a previous Friday in Kabale district. Here, she went to preside over the belated Women’s day celebrations and that she was welcomed by big wigs including MP Jack Sabiiti, Henry Musasizi, David Bahati, Ronah Ninsiima and Andrew Aja Baryayanga. The MPs allegedly praised her for steering very well the 9th parliament and fighting thuggery in government.

“Fr. Gaetano Batanyenda; the parish priest of Kitanga blessed her with a sign of the cross on the head and said that Uganda is ready for a woman president after 50 years of independence. Sabiiti, a senior regional FDC strategist welcomed Kadaga at Muhanga T/C with a convoy of boda bodas and women chanting praises for the speaker and anti-Museveni NRM slogans” the Intel adds.

The Intel claims that Fr. Batanyenda allegedly praised Kadaga for being a good leader and accused men of messing up the country and yet in other countries under women, they are doing well.
“These utterances and actions require further close studying. There’s need to study these developments in connection with the manner in which parliament is being managed most especially the humiliations government receives whenever it’s positions are brought on the floor” the report suggests.

The same Intel recommended a second line of investigation on how the oil debate was handled and reached acrimonious situation where what was baptized as ‘ill-intentioned’ MPs hijacked the debate to discredit government and why.
“The speaker deliberately ignored the president’s advice challenging the authenticity of the already investigated fake documents. The vice president tabled before parliament information to the effect that the documents had been proven to be fake” the Intel summed up.

HOW KADAGA WAS SPIED ON
To get all this detail, we got clues that intelligence planted a top spy within Kadaga’s security detail at the time. It was revealed that following the oil debate debacle, secret surveillance on her went on especially when she began her parliamentary outreach program.

But the one of Kabale scared the system more!
Here, our Inspectors reported that her security detail was penetrated and one of the men from her own sub-region was given recording gadgets. It was done in a way that this mole was given a brand new telephone with three brand new spare batteries. The brief was that he was supposed to relay live every moment as Kadaga drove through from her home in Kampala up to Kabale.

“Her movements were relayed live and whatever she did on the way. The purpose of the live communication was to avoid suspicion. So, back in Kampala, they got everything live as it happened. This is why after the Kabalore event, security asked her to call off her parliamentary outreach program” an inspector said and that’s how she ended her program of visiting MP’s constituencies.

It’s not clear whether her nemesis at the time Amama Mbabazi had a hand in spying on Kadaga but what we know is that both Kadaga and Mbabazi were at the time working to outsmart the other in the eyes of chairman Museveni. At that time, rumors had started that Mbabazi was due to take over from Museveni in 2016.

Her current outbursts come months after former PM Ruhakana Rugunda also came out and denied harbouring presidential ambition for 2026 as had been claimed on social media.
Watch the space!