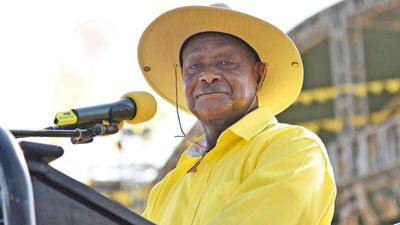 The government of United Kingdom (UK) has given an ultimatum of two months from now to dissolve an NRM company in that country but most of all, take over its assets and rights.
It has emerged that the party in October last year, through a one Nalubega Ajara Princess registered one of its diaspora chapters (NRM UK & Ireland Chapter) as a limited company making it NRM UK & Ireland Chapter LTD.

The registration of the party as a limited company had been kept a top secret until this news site Inspectors landed on a serious plot to allegedly use this very company to cause trouble for the NRM chairman himself Gen. Yoweri Museveni.
In the reported plan (see Gen. Museveni Faces Travel Ban As NRM Turn Into Limited Company) which we ably exposed, it was revealed that NUP honchos had plotted to use it to lodge serious human rights violation suits in the UK against the ruling party back in Uganda but the case was to be heard in the UK.

In the plan, the NRM would be served through its ‘subsidiary’ company in the UK and in case Kampala neglected the summons, the trial judge was going to rule against the chairman and hence issue a travel ban in form of warrant of arrest like it was done to Omar Bashir. The company was also registered with an alleged sinister plot to kick out Museveni from NRM chairmanship like it was done to Robert Mugabe in 2017 before he was ousted from power.

Now, our Inspectors have landed on serious clues that following our expose, the director of this company identified as Nalubega Ajara Princess has applied for dissolution of the same.

According to available details, Nalubega became the sole director of NRM UK & Ireland Chapter LTD on October 1 2020 in a period when president Museveni was busy strategizing on how he was going to win the 2021 elections. He therefore, according to political pundits had no time to know what was going on where hence the chance by alleged schemers to register the party as a limited company.

According to the certificate of incorporation seen by our Inspectors, the NRM company was registered as No. 12920779.
“The registrar of companies for England and Wales, hereby certifies that NRM UK & Ireland Chapter LTD is this day (October 1 2020) incorporated under the companies Act 2006 as a private company, that the company is limited by shares and the situation of its registered offices is in England and Wales” reads the certificate of incorporation accessed by our Inspectors.
It shows Nalubega Ajara Princess as the sole director residing in UK but born in Uganda on January 1 1986.

A year in business, the company had been trading at 25 Reed drive, Redhill England as their offices but somehow on 29/9/2021, changed address to First Floor Rm 21-23, Woodgrance road London.
We have now established that the recent exposure of its dealings has caused the director to file for a dissolution of the company.

“This company has applied to be struck off and dissolved. The registrar will proceed unless there is reasonable cause not to, and on dissolution, any assets remaining in the company will be passed to the Crown. Guidance is available on the grounds of objection. If in doubt, seek professional advice” the registrar says in a document accessed by our Inspectors.
It has emerged that Nalubega has already made her declaration to dissolve the company.

“I/we are the majority of directors apply for the company to be struck off the register and declare that none of the circumstances described in section 1004 and 1005 of the companies Act 2006 exists in relation to the company” she stated.
It is however, not clear what prompted her to dissolve the company which had successfully been kept a secret for a year plus. We are still hunting for this detail and we shall table it here and how it came about.

Meanwhile, the registrar of companies has already given notice in the UK gazzette giving interested parties’ a deadline of two months to file their objections to the plan to dissolve the company.

Last week on 9/11/2021, the registrar issued the First Gazzette Notice reading thus:
“The registrar of companies gives notice that unless cause is shown to the contrary, the NRM UK & Ireland Chapter LTD will be struck off the register or dissolved not less than 2months from the date shown above. Upon the company’s dissolution, all property and rights vested in or held in trust for the company are deemed to be bona vacantia and will belong to the Crown” the registrar said.

Panic as Bombs Reported at 3 Locations in Kampala