Hajji Kigongo Counsels Muslims On Good Conduct Even After Ramathan 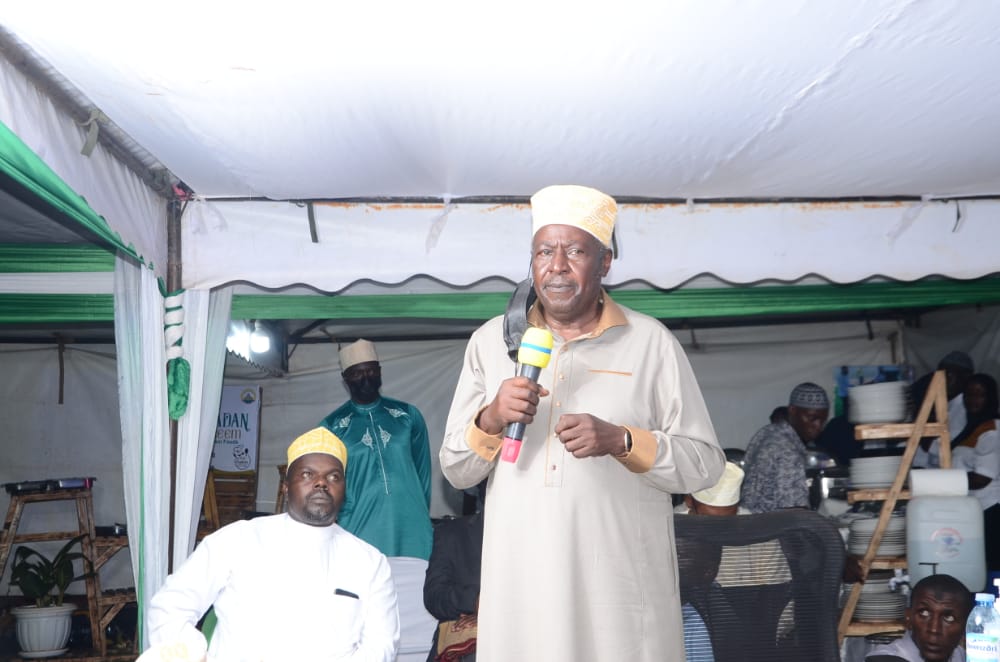 Hajji Kigongo speaking during the dinner

NRM vice chairman Al Hajji Moses Kigongo has rallied Muslims around the country to continue with good behavior exhibited during this holy month of Ramadan.
He was speaking at the Iftar dinner/Duwa prayers hosted by the NRM secretariat headed by SG Richard Todwong Awany at plot 10 Kyaddondo. This was the first ever event of this nature to occur at the NRM headquarters.

“We need to behave well during the month of Ramathan. We should practice what we preach but it should not end here during Ramathan. It should continue in our everyday lives,” Hajji Kigongo counseled.

He urged all Muslims to preach peace and not war or violence amongst themselves and other people.

“If we mean what we preach, God will pardon us. But if we don’t practice what we preach then we are doomed. I thank you for this Duwa for praying for our country. And I urge you to continue with this practice,” he said.

The NRM Secretary-General, Rt Hon Richard Todwong who first congratulated the Muslims who are almost completing the fasting period said the NRM organized the Iftar dinner as one of the ways to continue opening its doors to them.

“We thought of organizing this dinner to cement our relationship and open our doors more to welcoming you to our party. NRM is an all-inclusive party. We don’t segregate, point fingers or blackmail but embrace peace and unity,” Rt Hon Todwong said.

He however urged Muslim leaders to take the lead in the fight against poverty in the homesteads as one of the ways of ensuring peace.

“Government will provide peace and security but it goes down how you leaders on how you fight poverty and it translate into wealth in our families. This will translate into peace. When there is poverty, there will not be peace,” Todwong said.

He noted that poverty is an enemy of everybody regardless of our religion and political affiliations.
“We need to fight household poverty and this will translate into the peace we want. The challenges we have in our families mostly stem from poverty. If families are peaceful, it will trickle down to peace in the country.” he said.

Meanwhile, deputy Mufti Sheikh Abdallah Ssemmambo applauded the NRM Secretariat for hosting Muslims at the Iftar dinner, which he said is a symbol of generosity and cooperation.

“I am sure Allah will continue to bless your efforts in steering the affairs of this country. This dinner is backed with the fact of your thankfulness to Allah for blessing the party. Your close association with Muslims around the country is commendable and I would urge the NRM government to continue appreciating our stake as Muslims,” Sheikh Ssemmambo said.

He urged Muslims to focus on participating in all the social-economic programs that the government has introduced for their benefit.

“I thank NRM for organising this Iftar dinner and Duwa. Thank you for loving Muslims. We thank the NRM government for respecting everyone regardless of their religious differences. We thank President Yoweri Museveni and the NRM Secretary-General for thinking about us,” Sheikh Ssemambo said.

Preaching during the Duwa prayers, Dr Kisule emphasized the role of fasting as one of the five pillars of Islam.

“You can’t be a true Muslim if you don’t fulfil this pillar. Those who don’t appreciate the good done for them won’t get anything good. We must appreciate NRM for recognizing us,” he said.

He applauded the NRM government for recognizing the Muslim fraternity and supporting them in all ways.

“Those who say Islam is in danger under the NRM government have no proof but I have proof that NRM loves Muslims. I have never heard of or seen anyone being taken to court because he is a Muslim. Everyone has the liberty to worship a religion they want. The level of religious tolerance and freedom in Uganda is unprecedented.”

He mentioned several achievements like designating Iddi as a public holiday, having a national mosque, 3600 UMEA primary schools, 180 UMEA secondary schools and four Islamic universities that have been achieved under the NRM government.

“Previously we missed out on government positions for not being educated. This has changed greatly because of the support of the NRM.”

The Muslim faithful were later treated to a sumptuous dinner.

The Iftar dinner and duwa was also attended by among others NRM moneybags Barbara Nekesa Oundo.