Hajat Uzeiye Asks Kampalans To Demand KCCA To Account For PDM, Emyooga Funds As She Declares War On Thieves! 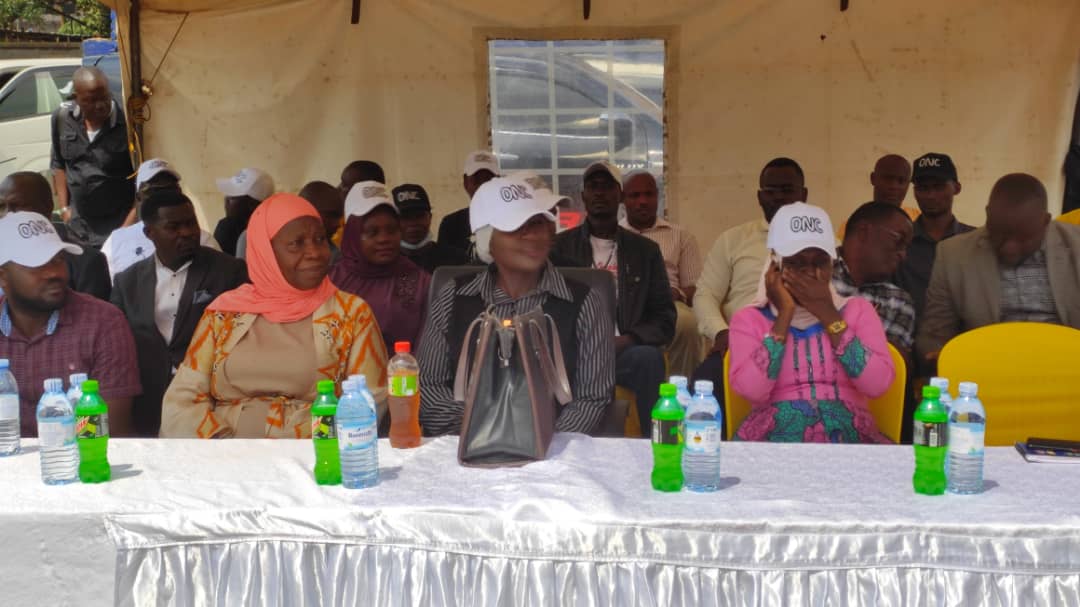 Bazzukulu movement National Cordinator who’s also the head of the NRM Office of the National Chairman (ONC) Hajat Uzeiye Namyalo Hadijah has challenged people of Kampala to stand up and demand for accountability for the funds that government has been earmarking for their economic empowerment.

As such, a tough talking Uzeiye asked all groups that applied for funds such as Emyooga, Youth Livelihood Program and the ongoing PDM funds to make reports to her office on the status of their applications and also scrutinize them. She says after scrutinizing them, she will file a report to the president on her findings so that he can understand those who were cheated and those who never got even as money could have been expended.

“We’re the heart of this country but we’re the ones who have not been helped. We need to help ourselves and come out to demand who’s stealing our money in Kampala? PDM has come, but who has benefited from this program in Kampala?” She asked amid wild cheers of ‘bagambeko’ (expose them) by Museveni enthusiasts.

She made the remarks while launching the Jjajja Omalako Tova Ku Main campaign in Kampala district at Bat Valley primary school.
Uzeiye said that for long, the president has been sending resources under various programs but it is shocking to see that Kampalans up to now have not benefitted.

“Museveni can’t be in office when you have not voted for him. Why is Kampala still poor? They talk of Emyooga, where is the money? Who among you, boda boda riders got this money? We need to help Jjajja to arrest these thieves. We should assist ourselves because we pay taxes but where is the money?” She fumed.

Uzeiye nearly shed tears at the podium after various groups she called to tell their story on the said programs funds but speaker after another, they all denied having gotten any funds. Some like the Saloon operators assured her that for a cool 3years now since their groups were registered, nothing in form of cash or machines has ever come to them. As for boda boda riders, some reported that they got less funds but even those funds were partly asked for by bureaucrats in form of kick backs.

She decried bureaucracy in accessing government funds, adding that KCCA had not helped people access these funds and yet they it collects huge taxes from them.
“Where do the billions KCCA collects go? Do they want to tell us that all what they collect goes to URA? We claim Kampala is opposition but we can’t reduce opposition when we have thieves. If we don’t fight for ourselves this time, even our grand children will blame us” she said.
Uzeiye said she had declared a war on thieves who are tarnishing Museveni’s name.

“This is a war. Those stealing our money are wealthy. I know it’s a big war and they will try to fight back like they have been fighting me since 2016 but here I am. I am not scared. They will poison us, they will kill us but no one has a contract with God on when he will die” she said adding that;
“If you asked for funds, when did you apply for it? In which year and what transpired? Bring that information to my office and see if they paid you or not and how much? Each FY, there’s money going to Microfinance but where does it go?” Uzeiye however, brought smiles on the faces of the participants when she declared that the president had given them Shs15m which she religiously delivered for them to quench their thirst.

Meanwhile, Kampala minister Minsa Kabanda said Kampala is affected by four challenges which she asked Uzeiye to table before the president. These include unfilled pledges, joblessness, complancency among NRM supporters and failure by the supporters to get information on available government support programs.

“Don’t stop at wearing NRM t-shirts but also monitor government programs. Boda bodas should also stop escorting whoever comes because they have paid you. Stay in one line” she said and encouraged Kampalans to pick national IDs to be able to easily access government programs. The function was crowned with the signing of the Jjajja Omalako Tova Ku Main board by Kampala leaders.