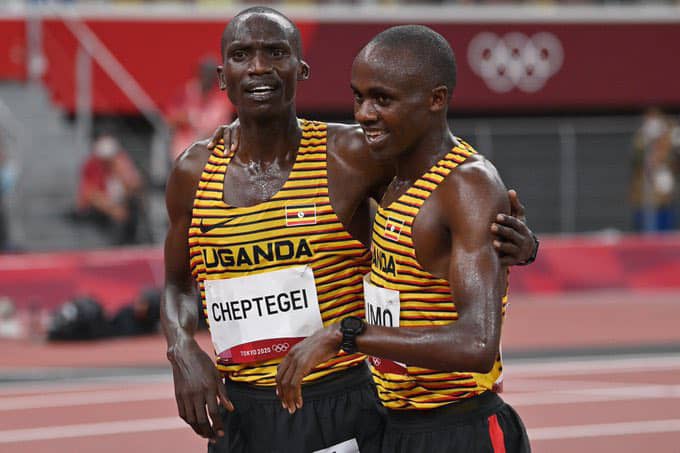 Cheptegei and Kiplimo hug after the 10000m race last week

10,000m world champion Joshua Cheptegei will hope to step up the heights and aim for gold as he lines up in a star-studded group of athletes at the Tokyo Olympics today.

Just like was the case in the 10000 meters, Cheptegei’s main obstacle manifests in Ethiopian Selemon Barega who beat him to the Olympic medal in the 10,000m finals last week. The 21-year old Barega powered down the home straight to cross the line in 27 minutes 43.22 seconds, ahead of Cheptegei who clocked 27:43.63.

Barega comes to today’s race seeking an Olympic double and a place among his legendary countrymen and mentors in Kenenisa Bekele and Haile Gabreselasie. In the race that will be aired on DSTV and local television channel Sanyuka TV, Joshua will have to also watch fast-rising Ugandan compatriot, tribes mate and teammate Jacob Kiplimo.

The man who was the youngest star in the 10000m race last week clinched bronze after posting a time of 27:43.88 but it took a last second charge from Cheptegei to pip him out of the silver place.

Jacob Kiplimo is also Uganda’s youngest ever Olympian having ran the 5,000 heats in the Rio Olympics as a 15-year old.

Just like in the 10,000m race when Kiplimo and Cheptegei sacrificed Stephen Kissa to do incredible pace-making for them, today they will likely deploy another Ugandan, Oscar Chelimo, to play the role.

It however remains to be seen whether the trio will execute their tactics to perfection. The Ugandans came short last week after failing to stick to their game plan which left Kissa disappointed since they had planned that he makes the race a very fast one but they didn’t follow him.

Joshua, who admitted feeling disappointed for not getting gold due to a tough 2021 which saw him perform poorly, will seek redemption at 3pm in the 5k today.

Meanwhile, in the women’s 1500m finals today, Uganda’s Winnie Nanyondo will seek to atone for a heartbreaking failure to reach the 800m finals last week by gunning for a podium finish in the 1500m finals at 3:50pm

Today. Nanyondo faces a tough lineup of opponents but will be buoyed by Peruth Chemutai’s gold-medal winning performance in the 3000m steeplechase earlier this week. Just like Nanyondo today, Chemutai won the race with a time of 9:01.45 and created history by becoming Uganda’s first woman to win an Olympic medal. This was despite standing up against world beaters in USA’s Courtney Frerichs (who won silver) and Kenya’s Hyvin Kiyeng (bronze).