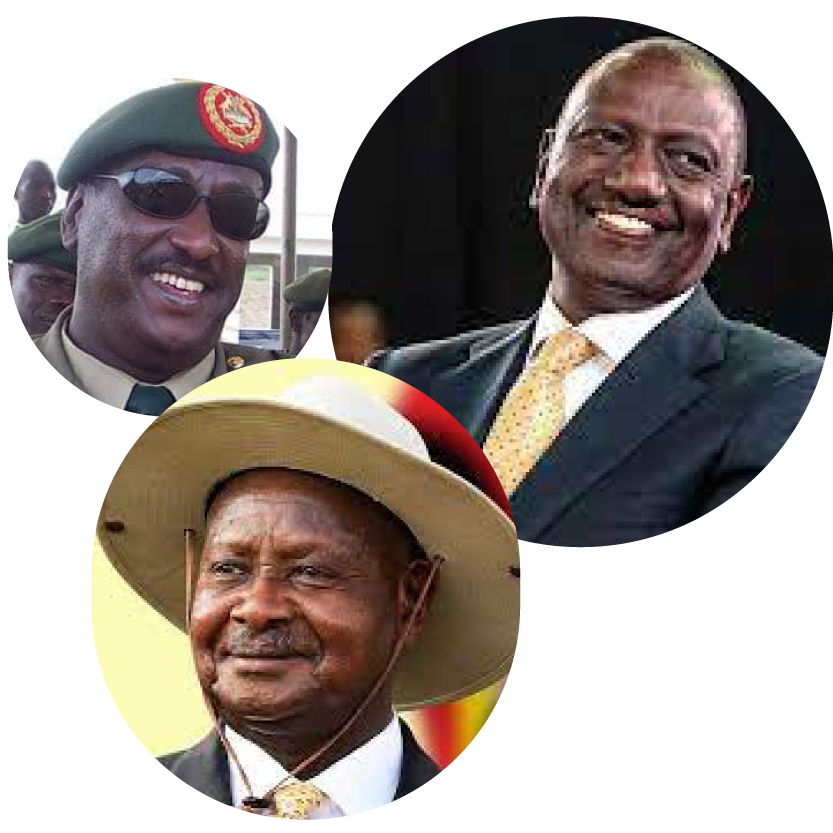 Within the next two years, something very fundamental is likely according to plan, to happen at the regional Assembly-EALA!
The much-talked about East African Political Federation is supposed to take place and it is our very President Gen. Yoweri Museveni Tibuhaburwa to become the pioneer President of East Africa.

In the design, it is being baptized as ‘Skeleton’ political federation and that; our minister for EAC, Rebecca Kadaga along with Uganda’s new team in EALA have a lot of homework in regards to this project. Kadaga sits at the EAC Council of Ministers, MPs in the legislative army-EALA and Museveni himself, sits on the EAC Summit. So, our Inspectors said, at all these levels, there’s going to be a lot of political activities going on to ensure the Skeleton federation is in place within the coming two years.

THE WHOLE PLAN IS HERE!

For unknown reasons, Gen. Salim Saleh has been away from public domain. Prior to his perceived disappearance, first son Lt. Gen. Muhoozi Kainerugaba was very active in holding social events baptized as MK @ 48 (birthdays). The last he held was in Jinja before unceremoniously cancelling the one of Mbarara. Saleh is reported to be the one overseeing these social events and since his tactical exit, the parties went silent.

Not that they died out, they were according to Inspectors simply paused and are going to continue as an ‘assessment of waters’ by Gen. Museveni and his top strategists continues to done.
We’re now told, with the return of Gen. Saleh, the Eastern frank beginning with Bugisu for the birthday parties is being mooted and meetings are in full gear particularly in Kiwatule-Ntinda. The said plans also involve vetting of Parliamentary candidates for 2026 in all constituencies.

Inspectors said that it was therefore, not surprising that a day after Gen. Saleh returned to public domain that; Gen. Museveni the following day stormed Bunyoro sub-region in Masindi and praised Muhoozi parties as having been a response to what he called ‘arrogance of the opposition towards NRM members’.

Museveni said he had no problem with those parties and also praised events manager Balaam Burugahare who’s the main organizer of those events. In fact, the Banyoro through Balaam asked Museveni to allow Muhoozi takeover in case he calls it quits.

“Museveni (through birthday parties) went on a fishing expedition to see how the country will receive Muhoozi. He now knows it that the country has received it (project) with inevitability. His statement in Masindi was simply to launch the bid for his son” says a top inspector knowledgeable on the strategy.

With the respected Gen. Saleh being seen as the Chief strategist, it is reported this is meant to balance the opinion within the armed forces especially between the bush war comrades and the new commanders in regards to Muhoozi.

“Gen. Saleh’s involvement is to help give it credibility. Since most officers hadn’t heard from the CiC himself about the parties, Saleh comes in to help stabilize the opinion. He’s highly respected across the military spectrum” said an inspector adding that ‘Muhoozi comes in to fill the gap. The deficit that would have been here is (Museveni) leaving a vacuum. There will be no vacuum if he (Museveni) climbs the ladder (EA president)”

Inspectors said it wasn’t by mistake for President Museveni and his party to decide for retention of incumbent NRM EALA MPs. It was a plan! The members include Mary Mugyenyi, Rose Akol, James Kakooza, Paul Musamali, James Odong and Denis Namara. The first three are former ministers while the last three are former NRM operatives in different offices. Museveni has gone ahead and anointed allying opposition parties DP and UPC candidates (both secretary generals of either parties) to go to Arusha. As for the position of independent member, the race is between Amongin Jaclyn, Veronica Kadogo and a certain gal from Western region. Both Amongin and Kadogo are however, said to be Museveni’s close pals, meaning either party that wins the independent slot, will automatically play his cards at EALA.

“From now onwards, the office of chief Whip is going to be busy to ensure members vote his candidates. For those who are going to be cantankerous, to hell with you. Very soon, you’re going to see EALA pushing for the federation. The next EALA is going to be very crucial because we need to have some sort of political federation in place. They are going to lay the skeleton federation” says an Inspector.

Our Inspectors added that it wasn’t by mistake that new Kenyan president Dr. William Ruto publicly announced at his swearing in that Gen. Museveni was the ‘Father of the Region’
“Within the EAC, Museveni is the head of it save for Tanzania. So, the only thing now, is formalizing it. The federation must come in the next two years maximum because all the necessary infra and super structures have been put in place” an inspector added.

Having worked on his internal infrastructure, his actions at regional level weren’t for a cup of tea. He was actually trying to lay his ground as he allegedly prepared for the onslaught.
In Rwanda for example, he has ensured that the hitherto hostilities are settled. The relations are now very normal that there have been exchange visits by presidents of both countries and other dignitaries.

In South Sudan, he’s been key in bringing peace there and he’s always consulted on the affairs there leading to prevailing stability.
In DR Congo, Museveni has not only helped stabilize the political contestations there but also ensure that he makes good of the huge debts Congo was demanding against Uganda over stealing their minerals. He has also gone ahead and built roads in Congo to boast trade in addition to cooperating on issues of security.

In Tanzania, he’s closely working with the government especially on issues of trade. Museveni has gone ahead and awarded Tanzania the strategic deal of oil pipeline which will ran from Hoima to Tanzania.

As for Kenya, the administration there cannot stop praising him as he also helped contain Al-Shabab terrorists who were regular visitors on the Kenyan soil bombing people. The same gesture he has allegedly extended to Burundi by ensuring that it also stabilizes.

“Can’t people ask why Uganda during these difficult times, has chosen to pay the DR Congo debts after all these years? It’s a question of acceptability. We’re softening the domestic audience in Congo such that when it comes to decide the pioneer EA president, Museveni is seen as a star! The Congolese will view him as a brother. All his actions in S.Sudan, Kenya, Tanzania, Burundi and Rwanda are part of his materials for building a house. He has put the sand, iron bars, sheets, bricks and the necessary joints. What’s remaining now is joinery and this is the next step” an inspector said.

In addition, Museveni is according to Inspectors seen as a senior in terms of administration with his credentials in political experience, Pan Africanism, Liberalization struggle, regional and international networks unrivaled by any leader in the region. And because some of the presidents in the region are new like Ruto, these allegedly still need more lessons on how to manage especially parliament.
They therefore, still have time to learn what was termed as ‘Parliamentary Science’ especially on how to moot important bills and passing them.

“Uganda was a failed state and he has transformed it. He has tested all constitutional regimes in Uganda under his rule. The movement system, multi-party system, term limits, age limit etc. Therefore, if he chooses to climb the ladder and leaves his son, nobody can disturb. He’s still in charge” an inspector said.

In September last year, this News site, broke a story that ‘Museveni Transition Takes Shape In NRM’ (www.theinspector.co.ug) in which we said, there is a plan to abolish the adult suffrage system to return to parliamentary democracy where MPs will elect the president. The artonney general and justice minister have already coined the project and may soon hit the floor with the bill. Watch this space!