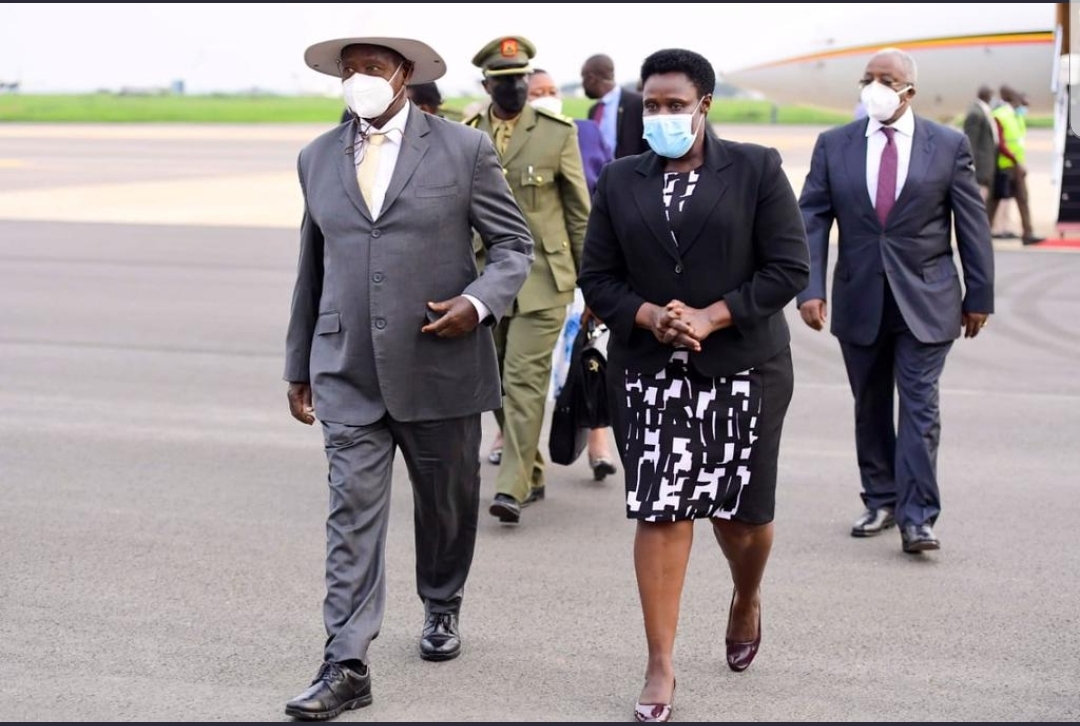 A fortnight ago, something happened in the remote district of Mitooma formerly part of Bushenyi district. Three high profile government officials including Vice President Maj. Jessica Alupo, Internal affairs minister Maj. Gen. Severino Kahinda Otafiire and defense minister Vincent Bamulangaki Ssempijja endorsed the 2026 Museveni candidature. Here, the ministers signed on an endorsement board for President Museveni to seek another Kisanja in 2026. This was at the International Youth Day celebrations themed “Unleashing the potential and role of the youth in national development’

The youth asked that Museveni should (as usual) be NRM sole candidate, a request Alupo pledged to table before NRM CEC for consideration. However, even as she promised the matter to be taken to CEC, already NRM CEC sitting at Kyobe in 2020 resolved that Museveni will be it’s sole candidate in 2021 and beyond, meaning this is already a done deal!

WHAT IS THE PLAN?

Our Inspectors suggested that for the three ministers to have gone to Mitooma, it wasn’t by mistake. It was a carefully chosen group allegedly sanctioned by president Museveni himself. Alupo represented the east/north, Sempijja Buganda and Otafiire western. We’re told Museveni actually sanctioned the project and is supposed to metormorphose it into a full blast launch in all regions. A mega budget for the same is also reported to be baking in the oven.

“Where you see Alupo, Otafiire just know it’s not mere politics but serious work. Otafiire can’t do something where Museveni hasn’t been involved. These two rarely do things without consultations” says a top inspector, adding that besides being regional ‘representatives’ the three ministers represented the armed wing of NRM and this was meant to signal to the security apparatus that their revolutionary CiC Gen. Museveni is still around. He therefore, wanted to undo rumors that Museveni was about to retire!

In fact, inspectors said the Mitooma event followed the one of Masindi where Museveni allegedly tactfully launched his fresh onslaught recently. It is here that the Banyoro through Balaam Burugahare asked Museveni to allow Muhoozi takeover in case he calls it quits. Unknown to the Balaams, Museveni thinks otherwise according to our Inspectors!
“Masindi was the launchpad for his new bid. More such endorsements are going to happen soonest and the new cabinet reshuffle will be designed factoring in this project” an inspector explained.

We’re told for now, two options are on the table. Fast track the EAC federation and Museveni becomes the pioneer President or he keeps around as he waits for all member countries to agree to the occasion.

Currently according to Inspectors, Uganda and Kenya seem to be ready for the deal but the rest of members particularly Tanzania are still scrutinizing the move. Hence, some NRM fans have taken to social media (Twitter) suggesting a MUSRUTO kind of federation can be formed for now as Tanzania and others make up their minds and will join in future.

This news site understands that Museveni badly wants the federation to be in place before 2026 and that the new EALA is supposed to tackle this matter. However, with some countries still playing hide and seek, it was reasoned that this is why he’s preparing his home ground in Uganda.

“Even if it fails to materialize before 2026, he will be available beyond that time. This is why he has started preparing back home so that he secures his bid in 2026 as he waits for EAC member countries to endorse the federation. Therefore, the Mitooma event wasn’t an event but a signal to NRM fans that Museveni is around in 2026” an inspector said.

The appointment of Alupo as VP came as a shock to many but no one ever knew Museveni’s calculations. Whereas some people at first tried to dismiss her as a political novice, president Museveni has proved that he made the proper choice.

He has gone ahead and fully supported her to prove to the doubting Thomases that the person they thought was going to be a mere representative on burials and church work would excel in that position including even on diplomatic front.
Museveni started by assigning Alupo roles in the African Union and recently at the United Nations.

“In the history of his regime, Museveni has always attended personally the AU and UN. If he wasn’t attending, he delegated Sam Kutesa (ex-foreign minister). Not his vice president(s). It is Alupo who has broken this norm. She’s now the one who goes to AU and UN and she has performed well. The president has fully supported her and this points to something people don’t know” says an Inspector adding that it was former PM Ruhakana Rugunda who went there to represent him once.

Besides the foreign roles, Museveni we’re told has empowered Alupo to be the one chairing cabinet meetings unlike those days when (former) PM chaired them.
Now, inspectors said president Museveni thinks Alupo can easily manage the affairs of the government in case he goes to EA state house. Under the move whose materialization may come before or after 2026, the president will quit state house midway his term and peacefully handover to Alupo.

A soldier by profession, Alupo we’re told will be the transitional president before first son Gen. Muhoozi Kainerugaba comes in. In the alleged project design, when Alupo becomes president of Uganda, Muhoozi will be appointed minister for defense and he will effectively be the army commander. The idea to appoint him in that position, is to among other things make him learn public administration and politics of parliament since he will be a minister.

Secondly, as (President) Alupo will be running government, Muhoozi will help her on security. In fact, inspectors said Gen. Museveni is looking at promoting Maj. Alupo to a one-star general (Brigadier) but that she will have to first undertake a military course soonest. We’re told the course was supposed to be done in Kimaka but since she’s a Vice President, issues of superiority came in between her and the military instructors at Kimaka. Hence, Gen. Museveni allegedly ‘elected’ that she goes for a course abroad.

“By the time Muhoozi becomes president, he will already know how to manage parliament. People have not understood Museveni but he will surprise this country by bringing Alupo as his successor” says an Inspector. By law, Alupo number two of the country followed by the speaker who’s number three and chief justice number four. This same constitutional setting has already worked in Tanzania with a female president Suluhu succeeding now fallen president John Pombe Magufuli. Suluhu has maintained stability of Tanzania to the shock of many who initially thought she wouldn’t manage.