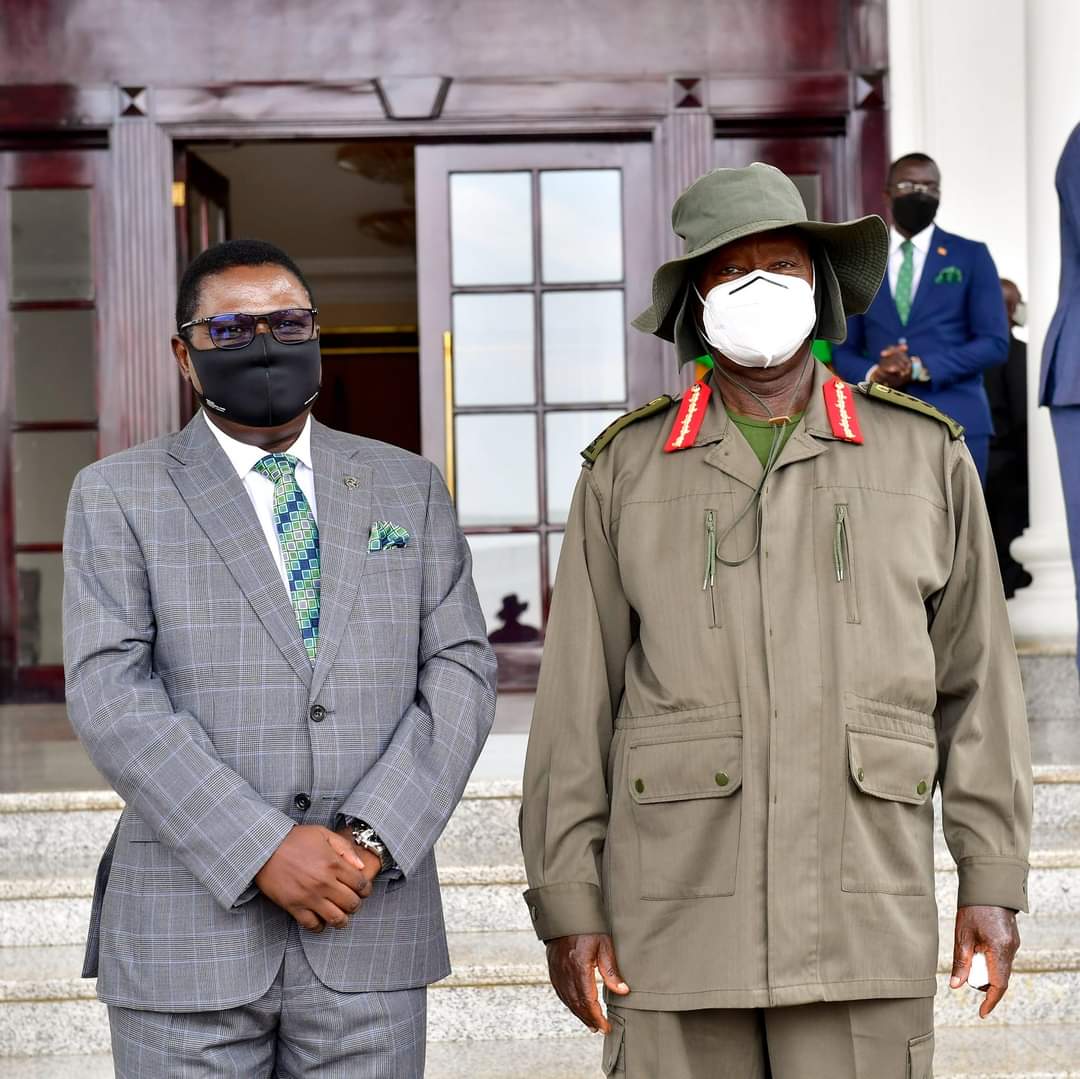 Last week’s ‘defection’ of hitherto DP President General Norbert Mao has continued to rock media pages. Mao who claims to have signed a cooperation agreement with NRM is under fire by his own members accusing him of betrayal and vending the party to Gen. Museveni. This News site has however, obtained credible clues on why Gen. Museveni brought Mao, the stakes at hand and why he promoted Hamson Obua to lead the NRM caucus. In this briefing, we reveal underlying details and why Mao Should watch his back and how the reshuffle has left NRM Honchos guessing Museveni’s next moves!

In the run up to the 3rd term for President Museveni, a meeting took place in London. It involved NRM Kisanjaists including Patrick Asiimwe, Peter Magomu Mashate Amama Mbabazi and Sam Kutesa on one side while others like Eriya Kategaya were on the opposite side. We are told even Norbert Mao had been invited for this meeting but he was allegedly denied a Visa by the British Embassy.
In that meeting, Kategaya allegedly put up a spirited opposition against lifting term limits saying we needed to preserve the constitution.

“There’s need for democratization, accountability and preservation of our constitution” Kategaya was quoted as saying but Museveni had sent Amama and Kutesa to counter him and indeed the duo did a great job for him. Kategaya didn’t even share a lodge with his former cabinet colleagues but decided to go and spend a night at his sister in law (names withheld).
However, after about four years of terrible grassing, the former honorary Brigadier Kategaya decided to return to Museveni and he was immediately posted as 1st Deputy Premier and minister for EAC currently in the hands of Rt. Hon. Rebecca Kadaga.
Upon return, there was an NRM NEC meeting at State House chaired by Gen. Museveni. In that meeting, Kategaya allegedly suffered a setback after rallying delegates on observing discipline especially in regards to those who had lost primaries but wanted to stand as independents.
He raised his hand to speak and Museveni as usual, granted him a chance to speak.
“Hon. Delegates, we need to know this is a serious issue. We must have principles” Kategaya started but even before he could drive his point home, the delegates all chorused in disapproval that ‘Principles?’

“NEC burst into laughter wondering if Kategaya was the right person to talk about principles. Museveni saved him by asking members to allow Kategaya chance to make his point but he had already lost credibility” says an Inspector who attended that meeting.
As for Awori, he told a similar meeting where he said as ICT minister, he had brokered a deal where tractors were to be given to members of Parliament.
He therefore, informed the meeting that he and his team were trying to rally MPs to take up this tractor initiative in order to boost Agriculture.

“Oh, I wish Awori had joined us long ago. We needed such good ideas yesterday but you remained in the wilderness” Museveni joked throwing participants into rib-breaking laughter.
However, as time went by, Awori after his defection, never won any parliamentary seat again. He even lost his ministerial appointment in 2011 a few years after defecting to NRM.
Now, Inspectors suggest that unless Mao is skillful enough, his defection might ruin his political career just like it did to Awori, Omara Atubo and Kategaya.
“Mao must be careful if he’s to bring controversial bills as justice minister. Today we have a very vibrant opposition. There are also NRMs (people) who have sour grapes viewing him as a fluker. They are asking how could he jump the queue?” Opines a top inspector in NRM who refused to be named for fear of reprimand.
Our Inspector added that the only available option for Mao to deal with parliament is to resort to his never ending charming smile to brush off their rhetoric.
“But even this will depend on the mood. Are they ready for his jokes? If not, then he will suffer” our Inspectors added.

We have been informed that as line minister who controls the Electoral Commission, Mao’s main task is to keep opposition NUP on tenterhooks as regards ownership of this party for about three years ahead. He is said to be going work more closely with the Kibalama group as he tries to put a brick on the wall aimed at reducing NUP and Bobi Wine’s influence.
“We’re going to see a lot of political activity within NUP. The squabbles will increase and the minister will definitely have a final say” says an Inspector but warned that such a move may work temporarily but it might backfire.
“Paulo Muwanga took over the role of EC in 1980 and declared Milton Obote. The people felt cheated but had nothing to do for fear of prison. However, their spirit had been hardened and they followed Museveni in the bush” an inspector said adding that Gen. Museveni needs to tame some overzealous ministers especially new comers who propose all sorts of measures some of which might backfire.

Meanwhile, the mini-reshuffle of last week saw Gen. Museveni appoint two new Acholis to cabinet. These included Mao and Akello (state minister for economic monitoring). Akello is said to be a close ally of Moses Byaruhanga a senior State House operative. As for Mao, he was one of the close allies of the late speaker of parliament Jacob L’Okori Oulanyah together with chief justice Owiny Dollo and Gen. Robert Aronda Nyakayirima (RIP).

Museveni has since appointed Mao as the supervisor of Dollo’s sector of judiciary. In addition, the NRM secretariat is headed by another Acholi Rt. Hon. Richard Todwong as SG.
On the other hand, he elevated Denis Hamson Obua from state minister for sports to Government Chief Whip. Obua will now work hand in hand with new recruits Rt. Hon. Anita Among (speaker) and Thomas Tayebwa (deputy speaker) in parliament.
“Mzee has disoriented both NRM and Opposition in Mao’s appointment. He is just beeping them, indicating his decision can be unlimited depending on how you treat him. People made noise on an Acholi CJ (Dollo) and Acholi Speaker (Oulanyah), now (we have) an Acholi CJ and Acholi Minister for Justice and Constitutional Affairs! Difficult to Comprehend” says a top inspector in government.

The mini-reshuffle took many by surprise as even the promotion of Obua to a full cabinet position wasn’t expected soonest.
“Look at Parliament, two (former) FDCs manning the affairs, then Obua now the GOCW. Obua has been tried and closely mentored, I believe it’s out of trust that he deployed him to parliament” an inspector added.
Within the top ranks of NRM, there’s a feeling that Museveni is slowly working on the transition. In so doing, he is trying to sideline all those who are aged and those who have been giving him sleepless nights. Behind these changes is an alleged hand of former premuer Amama Mbabazi.
“There is also the transition question. Those who are nagging may be left out completely. I think in the 35years, he (Museveni) has understood Uganda better and could have formed some kind of opinion many not privy to” our Inspectors adding that ‘Mzee is now dealing with historical linkages and trusted young Turks.

With key positions now being taken up by young NRM operatives like Akello who belongs to the Moses Byaruhanga’s team, the appointment of Denis Obua as Government Chief Whip also falls in this calculation.
It must be recalled that Obua spent years knocking on the doors of cabinet but President Museveni kept closing it on him. Unknown to him was an alleged strategic ‘mistake’ he made in the 8th parliament after he championed a motion to honor former Vice President Gilbert Bukenya for his upland rice scheme which had enormously reduced poverty and hunger among people of the north and East. Bukenya’s adverseries pinned Obua who formerly worked in VP’s office on being part of the secret team marketing him for president. The end result was for Bukenya’s budget to be slashed to mere pocket change worth Shs500m annually in order to cripple his movements and public engagements.
Obua piled more political misery on his fate when he became part of the motion seeking for a special sitting of Parliament to debate the controversial death of former Butaleja woman MP Cerinah Nebanda Arioru. Museveni opposed this recall.
“Remember he worked in his (VP) office, then you recall when he tried to recall Parliament from recess, Mzee spoke to everyone who had signed and he (Obua) was left in isolation. The recall suggested Mzee killed Nebanda. Therefore, I think his elevation to GCW is either to rehabilitate him or being taken to Parliament to crash” senior Inspectors said. Watch the space!