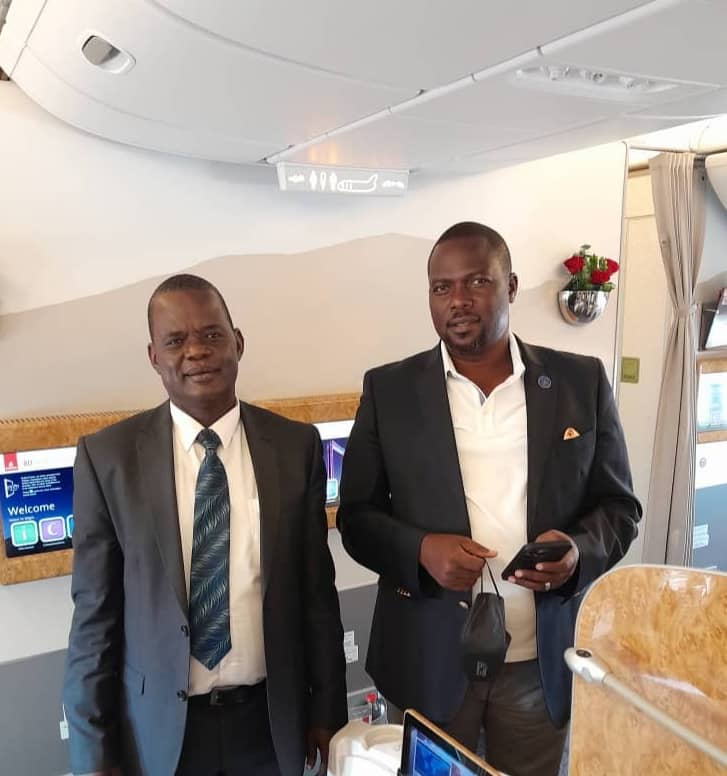 Todwong and Pollar at the airport

President Museveni has dispatched a team of NRM officials led by Secretary General Rt. Hon. Richard Todwong to help improve on NRM image in Europe which has badly been tainted by opposition propagandist in the recent past.

Todwong and his team including Maj. Awich Pollar, the NRM director external affairs are going to spend three days in Munich-Germany where the party is holding it’s First NRM European Diaspora Convention. The convention has been organized by Museveni’s blue-eyed gal Lillian Ikulumet who has been putting up spirited defense for the president and government regarding the state of human rights in the country. Ikulumet recently met the EU Parliamentary Sub-committee on Human rights where she presented the government’s side of the story on alleged human rights violations. She assured the Europeans that the allegations were seriously being investigated and those involved would be brought to book.

“The SG Rt. Hon. Todwong and the Secretariat Director responsible for Foreign Affairs Maj. (Rtd) Awich Pollar have this Tuesday afternoon left for Germany on official party duties. The SG is delegated by the National Chairman and Head of State H.E Yoweri Kaguta Museveni to represent him there. While in Germany, Todwong will address a three-day conference attended by the NRM Party members in the diaspora.The meeting is scheduled for this Friday to Sunday” says Rogers MULINDWA, the NRM secretariat communications officer.

According to Maj. Awich, the conference to be held in Munich City will also attract participants from United Kingdom, Netherlands, Sweden, Turkey, Dubai, Norway and South Africa among others.

In 2021, the Gen. Museveni created a Directorate in charge of Foreign affairs at the secretariat.

“The conference will give us an opportunity to create more party visibility, clear the misconceptions by the opposition propagandists, lure investors into Uganda and seek audience with different development partners among many other objectives” Maj. Awich said before take off at Entebbe airport.

Others on the delegation include Richard Komakech a senior researcher attached to the SG’s office and Patrick Obura the Executive Assistant to the Deputy Secretay General.

The NRM two days ago held a similar event in Canada where Museveni through his minister Ruth Nankabirwa asked Ugandans in Diaspora to invest in Uganda. He also said the country is now ripe for investment since all necessary infrastructure like electricity, roads among others are in place including peace.
The convention according to Ikulumet will handle among others the Human Rights issue in Uganda, Tourism, Investment and education Opportunities in Germany.