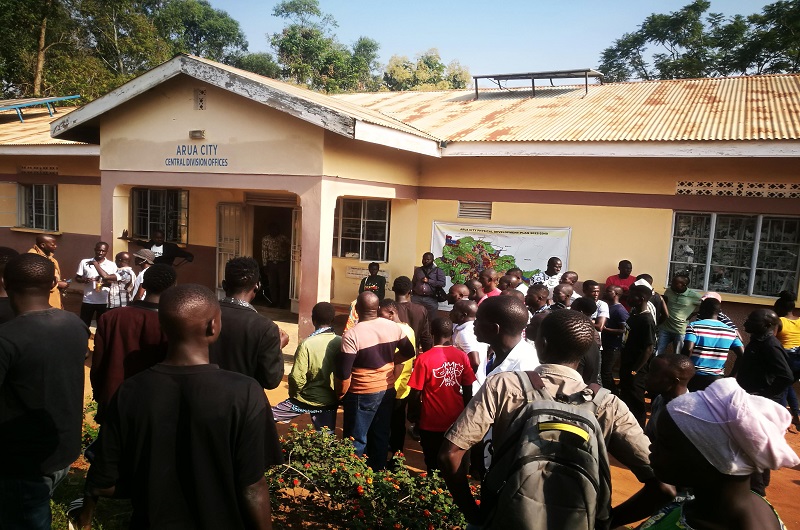 ARUA. There was tension at Arua Central Division offices in Arua City on Tuesday when hundreds of street vendors stormed the Division offices and threatened to thump the officials on ground.

The vendors under their umbrella “Onjivu street united business association,” were protesting the action taken by the council to demolish their makeshift stalls along Onjivu street in the city center at dawn.

The stalls were dismantled on Tuesday morning at about 4:00am when the vendors were still sleeping, only for them to wake up and find the street very clean.

This prompted the angry vendors to mobilize and storm the Division offices where they nearly thumped the law enforcement officers they found on ground. On sensing danger, the officers were seen sneaking for fear of their lives while others concentrated on relocating their vehicles and motorcycles to a safer place to avoid being destroyed by the vendors.

“I was called in the night that these people (the law enforcement officers) were demolishing our stalls and when I rushed to inquire what was happening, they told me that they were sent by the Town Clerk. I said if the Town Clerk was to take such an action, he would have first met us and given us an ultimatum to leave the street,” said Hassan Iman, the Onjivu street united business association chairperson.

“Now that they have demolished our stalls, where are they expecting us to eat from?” Iman asked, adding that most of his members picked loans to do business so that they can pay their children in school and feed their families.

He said their coming was to get an explanation from the Town Clerk about their fate, lest they will not leave the Division premises.

However, calm returned when the Bazar Ward Councilor, Rashid Osino surfaced and promised to protect the vendors.

Osino asked the striking vendors to return to the street and re-erect their stalls until a formal letter is written to them by the Town Clerk to leave the area.

But when contacted, Isaac Wanje Mwima, the Arua Central Division Town Clerk warned that they will demolish the stalls again.

“On the issue of Onjivu street, we received these vendors today saying they were not notified and to me, I think they are not saying the right thing because last week on Thursday and Friday, I was personally at Onjivu street with my team and I shared with them on how to move to a place gazetted for them,” Wanje said.

“I remember we shared with Hassan who is the chairperson of that group and we had agreed that they should move to social center market because that is the place that has been gazetted by the council to shift the balances of people who can’t fit in the main market. We advised them to move but they didn’t act and that is why we decided to clear the place last night,” Wanje remarked.

Wanje noted that making noise here and there is not a solution to the problem. He instead advised the vendors to abide by the council decision to move to the social center market.

“So, I want to encourage them and the general public, especially all those who are sitting on the streets to move to the social center market on Ediofe road. Not only Onzivu street but also people sitting on Idi Amin Road, Lemerejoa road and Duuka road among other streets in town should prepare to move because as council, we are planning for a massive operation with enforcement to move them to the social center market. Those who will insist on re-ecting stalls, I assure you that we shall demolish them again,” Wanje said.

“I DON’T HAVE JOBS FOR U”-M7: Inside A Stormy State H’se  Meeting Where NRM EALA MP Aspirants Pocketed Shs256m To Quit Race