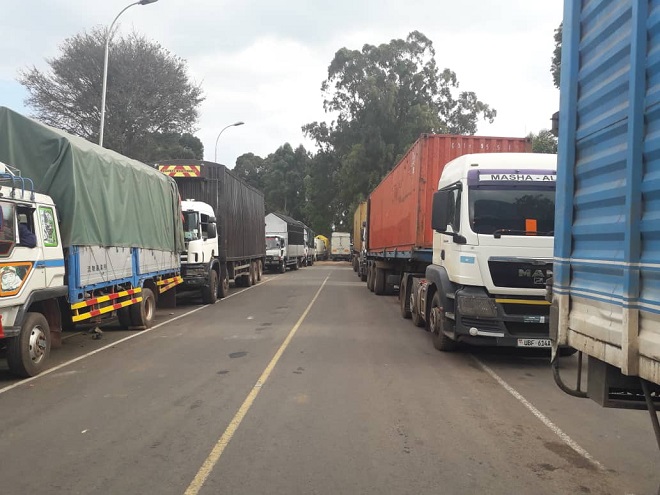 Uganda’s ailing health sector is one of the major triggers that sparked off the strike which culminated into the current fuel crisis, The Inspector has exclusively learnt.

According to highly placed sources, fuel truck drivers decided to strike after Ugandan Covid-19 medics insisted on rejecting Covid-19 results from Kenyan hospitals and laboratories despite the latter being flocked by Ugandan dignitaries for medical referrals.

“This infuriated the drivers who could not understand how Ugandan medics could not trust Covid-19 results from Kenya and as such required them to test again at exorbitant fees yet hundreds of Ugandan officials always run to Kenyan as a point of medical referrals each time things fail in Uganda. To them, the insistence bordered on a strange scheme of sorts rather than an honest move to stem the spread of the deadly pandemic,” a source said. Our sources added that they severally raised their complaints to that effect before Ugandan authorities but got no help. “That is why they finally resorted to industrial action,” the source added.

As we speak now, the issue of high fuel prices is a hot point of discussion in parliament, with legislators also engaging various stakeholders to find a lasting solution to the high fuel prices. The situation is so bad in the country that many private cars have been parked by their owners. This partly explains why there’s less traffic jam than usual on the roads. On average, a liter of petrol is sold at Shs5500, a price many motorists deem so high. In recent weeks, government has made promises to lower these prices but despite a host of interventions, the pump prices remain high. This recently forced government to threaten to deal with fuel dealers whom they accuse of hoarding the fuel to perpetuate the crisis. On the other hand, the crisis has cast scrutiny on government, with many questioning its periodization in areas like having mandatory fuel reserves to cushion against conditions like we are in.

According to credible reports, the current fuel shortage was occasioned by a strike by truck drivers who protested the exorbitant covid-19 testing fees as well as annoyingly prohibitive protocols by majorly Uganda and Rwanda. Specifically, truck drivers were required to pay US$30 (about Shs110,000) for a Covid-19 test before being cleared to enter Uganda. Initially, these tests were being carried out every two weeks and one would be restricted from proceeding with cargo without getting Covid-19 clearance.

To the drivers, this was a big inconvenience both financially and in terms of time.

“We would sometimes spend a whole day or two without getting results. This meant one would move around the hotels, restaurants and other social gathering points while awaiting the results. And as all this happened, we would be freely mixing with the neighbouring communities thus defeating the actual logic of testing. We therefore realized these people were simply eating our money for an exercise that wasn’t even effective,” said a truck driver, on condition of anonymity.

The sources added that while the fortnightly tests were a heavy burden, the burden was made heavier after the drivers were required to test after every three days.

“This was the final blow that broke us. It meant that one had to exhaust all their mileage allowance on Covid tests because given the nature of our long routes, many times the Covid clearance permits would expire when one is still in transit,” the source said.

Matters were also worsened by the fact that only Uganda and Rwanda insisted on these paid tests which were however free of charge in Kenya and Tanzania.

“Our major concern was that even if you presented a clearance permit from Kenya, the Ugandan medics at the border would insist on testing you. We were then left with two guesses: either the Ugandan medics doubted their Kenyan counterparts and their entire health system, or this (testing) was merely a money-minting scheme owned by some mafia whose sole aim was making as much money as possible,” the source said.

It is said that on January 2, 2022, the truck drivers under their umbrella association sat in Mombasa, Kenya and resolved to put an end to this “nonsense”.

One of the major resolutions was to force Uganda to either abandon the Covid tests or make them free of charge just like they were in Tanzania and Kenya. “This was based on the logic that if Ugandans doubted results from Kenyan medical system, how come their dignitaries run to Kenya for better treatment when the situation worsens? Something didn’t add up, therefore.”

“Secondly, Uganda had totally lifted the lockdown and so we saw it illogical to continue subjecting us to tests yet we also get the disease from people we interact with. We saw the continued testing of truck drivers as stigmatization and victimization. Are we the only ones that spread Covid or government had put Covid in our trucks that we were free to mix with the population but required to be tested as soon as we got into the trucks!” the source added.

The other point of discontent was the rampant corruption which had cropped up at the border as drivers fought to avoid the exorbitant testing fees.

“Once we realized that the tests were draining us financially, many drivers resorted to bribing the testing officers at the border. At as low as Shs30,000 to 40,000 one would get a Covid clearance permit and save the 70k or 80k that was required. This business boomed so much that it ended up defeating the whole logic of tests. This is why we wanted them removed.”

It is said that after the meeting, the drivers’ association presented their demands to the concerned authorities but also widely circulated them to members via Whatsapp. They then signaled them to be ready to strike if no redress was got immediately.

Having failed to get desired response from Ugandan authorities, the drivers association signaled members to park their vehicles at the border. And very soon, the Webuye-Malaba and Busia Kisumu highways snaked with long lines of striking trucks.

“The order however was that the trucks should be strictly parked on the roadside to allow normal traffic flow for other vehicles,” the source said.

The strike would however turn ugly when a convoy of some military men came and evacuated about 50 trucks from the border.

“This was seen as provocation so the orders changed to involve sabotage in the strike. They therefore ordered us to block the roads by packing in the middle of the road to cause total traffic breakdown,” the source said.

But it was later agreed to coopt communities into the strike.

This was after communities along the routes where the trucks packed began refusing to allow the drivers use their places of convenience.

“For this, the drivers occasioned a ‘pupu crisis’ in these communities, easing themselves by the roadsides and near compounds of these people.

“Very soon these people began complaining of a looming health crisis including fears of cholera outbreaks. They thus started to exert pressure on concerned authorities to save them from the truck drivers,” the sources said.

But even before these voices reached the intended targets, in Uganda and also South Sudan, acute fuel shortage broke out. This is because most of Uganda’s fuel is mainly transported by road through the Malaba and Busia borders. With no trucks coming in, it was obvious that there would be no fuel.

Following heated public outcry, the Ugandan government began interventions to address the problem. Unfortunately, this fire brigade endeavor followed shortly after the medics’ strike where government had also first resorted to threatening medics with sacking before it buckled under pressure and acted accordingly.

The endeavors began on January 13, 2022 when a joint multi-sectoral meeting for East African community ministers sat to assess the situation and propose remedies.

Well-armed with the demands of the drivers, this meeting resolved to scrap the extortionate testing fees. Henceforth, drivers would be tested free of charge using the RDT method.

With the first hurdle overcome, there were still customs related barriers including slow clearance at the border points.

Thus, on January 24, 2022, Uganda’s transport minister Katumba Wamala met with his Kenyan counterpart James Macharia at the Malaba border. They then resolved that there would be no scanning of trucks at the customs so as to enable the backlog of trucks to clear.

“The traffic stretched miles and miles, with the port also filling up since there was no loading of trucks going on. That’s why the EAC governments had to eat humble pie and listen to the truck drivers,” our source revealed.

Further intervention was done by Prime Minister Robinah Nabbanja who visited the border and ordered removal of customs roadblocks and stopped stoppages at weighbridges.

According to reports, the ministerial interventions have indeed seen the backlog of trucks reduce or clear to normal levels. For instance, a report presented by tax body Uganda Revenue Authority to the Parliament Committee on Tourism, Trade & Industry revealed that by January 22, 2022, URA cleared an average of 126 fuel trucks as opposed to 22 trucks cleared daily between December 1 and 31, 2021.

This increase is a sharp one and should have been enough to cover the fuel gaps thus bringing the prices down. But with the fuel prices not declining MPs blamed fuel giants Vivo Energy (who import and distribute fuel for Shell) and Total Energies who shipped in 31 million and 22 million litres respectively. The projection is that the litres they imported into the country in January are more than enough to stabilize the supply and subsequently the demand and price; which hasn’t happened. There’s fear now that the two companies are hoarding fuel and government has already threatened to deal with them.

However, the government has also been accused of having a hand in the crisis; particularly failing to ensure that the country maintains the mandatory reserve of fuel. In fact, while facing MPs, officials from the Uganda National Oil Company (UNOC) revealed that Uganda’s current reserves stand at only 30 million litres. Ironically, these were found to only cushion the country for just 4 days given that the daily national demand is 6.5 million litres. When put to task, however, the UNOC officials painfully revealed that the country has no single drop of fuel in even its small reserve capacity.

MPs promised that the fuel crisis would cease in 10-days’ time ending February 8, but it remains to be seen whether this is attainable.