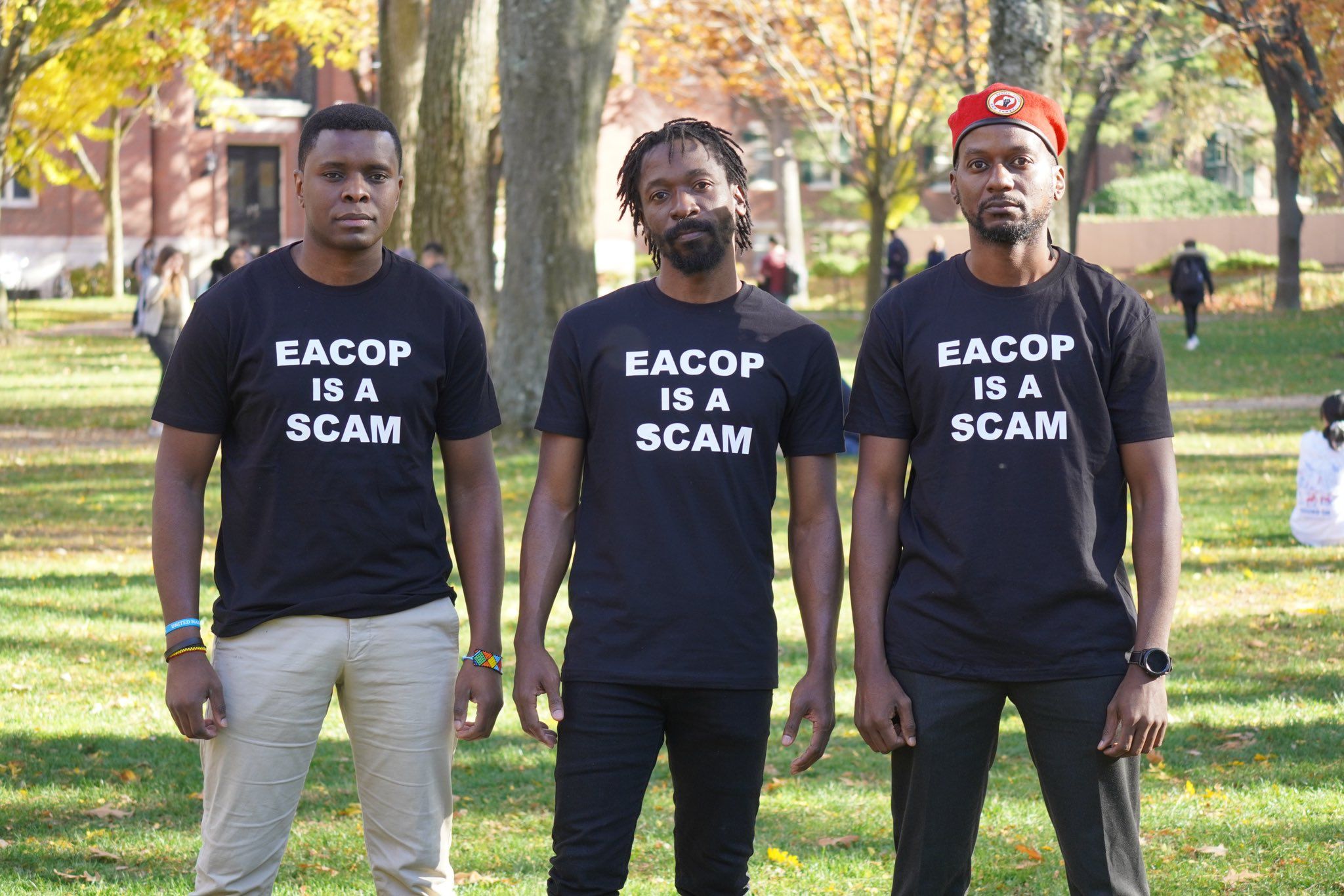 Hillary, Ssemakadde and their pal in US after Gen. Museveni won the battle on EACOP

Last week’s decision by European parliament to rescind it’s resolution against construction of the EA Crude Oil Pipeline (EACOP) is said to have sent Ugandan protestors in total crisis.
We understood that the group led by a one Hillary Taylor a.k.a Justice Hunter and counsel Isaac Ssemakadde a.k.a Legal Rebel together with their pals reportedly met in US to restrategize after the resolution was quashed.

“As you can see, the group is under pressure because the donors will not send more money. The group is also being asked as to why they are not holding similar protests back in Uganda” says an Inspector.

We’re told when the resolution was passed, the Parliamentarians in Europe wanted to see the reaction of Ugandans on the ground to see whether they really cared about what the MPs had done in relation to Uganda.

“But there wasn’t anything. Not even a demonstration to show that EACOP wasn’t needed in Uganda. What we saw were only people protesting at Chinese, French and Uganda House in the US but it stopped there” says an Inspector.

In fact, to prove how things weren’t good in the anti-EACOP camp, Ssemakadde is said to have travelled to the US where he gave a lecture explaining how it isn’t easy to demonstrate in Uganda and the difficulties they face.

“He was at Harvard university to meet those Whites. He was at Harvard Law to present a lecture on Repression, Surveillance and Militarism in present day Uganda” says an Inspector.
We’re told having registered a setback as result of the ACP-EU resolution on EACOP, following a spirited fight by government to proceed with the project, the group hasn’t rested.
Our Inspectors landed on Hillary, Ssemakadde and another unidentified comrade of theirs wearing printed anti-EACOP T-shirts in Boston.

In fact, Hillary took to his Twitter account and pushed further his anti-EACOP antics.
He said as UN is warning that there’s no viable path left to 1.5°C climate target, Uganda shouldn’t risk investing a loan of nearly USD5bn in EACOP calling it a climate bomb.
He argued that Uganda’s economic development should be as clean as possible and maximally efficient to cut GHG emissions.

“By the look of things, the group is crestfallen. It is very devastated with the recent resolution as it casts doom for their further funding for activism. The government dealt a big blow to them” says an Inspector, adding that Hillary the boy behind those protests is not about to back off.
We’re told having suffered that setback, the group even spent part of its time moving from place to place to kill stress and also look for possible recruits to protest again.

For example, Legal Rebel was spotted in some joints in Boston appearing devastated while in another picture he was seen with former NBS tv scribe Remmy Bahati who’s now based in New York.

In the exclusive picture Legal Rebel posted on his Twitter account, he was seen smiling like an MP who had just won a court petition as he enjoyed the company of Bahati!
The gorgeous babe from Tooro was also seen enjoying what was going on.
Legal Rebel even took to his account and said that ‘Hallelujah, weekend has come’
And yet, our Inspectors suggested that Bahati and Ssemakadde’s close pal Hillary Taylor are worryingly close that even their followers on social media are begining to suspect that maybe, Hillary intends to explore the oil well of Tooro.

“Bahati and Hillary are acting like real Siamese twins. The duo must be up to something related to achieving a romantic EACOP between themselves”noted an inquisitive inspector.
In fact, one of their followers Pius Jadwar last week joked about the duo and asked Hillary to tell Ssemakadde to tell Bahati that they appreciate.

“Freedom fighters, Naye @HillaryTaylorVI, ngambira kojja wange @IsaacSsemakadde angambire @BahatiRemmy nti tusiima” Jadwar said.
In a picture posted by Hillary himself, he showered praises to Bahati referring to her as Avowed News Junkie while referring to himself as Justice Hunter and counsel Isaac Ssemakadde as Legal Rebel. Hillary in this picture exhibited ‘come to bed eyes’ as he looked at gorgeous Remmy who responded with equally suggestive eyes!

Hillary is a highly trained boy in the field of human rights and went to Harvard university while his perceived ‘Oil project’ Bahati Remmy went to Colombia university. The duo are said to be closely ‘sharing notes’ as they whisper all sorts of messages to each other.

We’re told they maybe working on a plan to go to Les Vegas soon to discuss further the prospects of Hillary securing the environment around Bahati.
Watch the space!