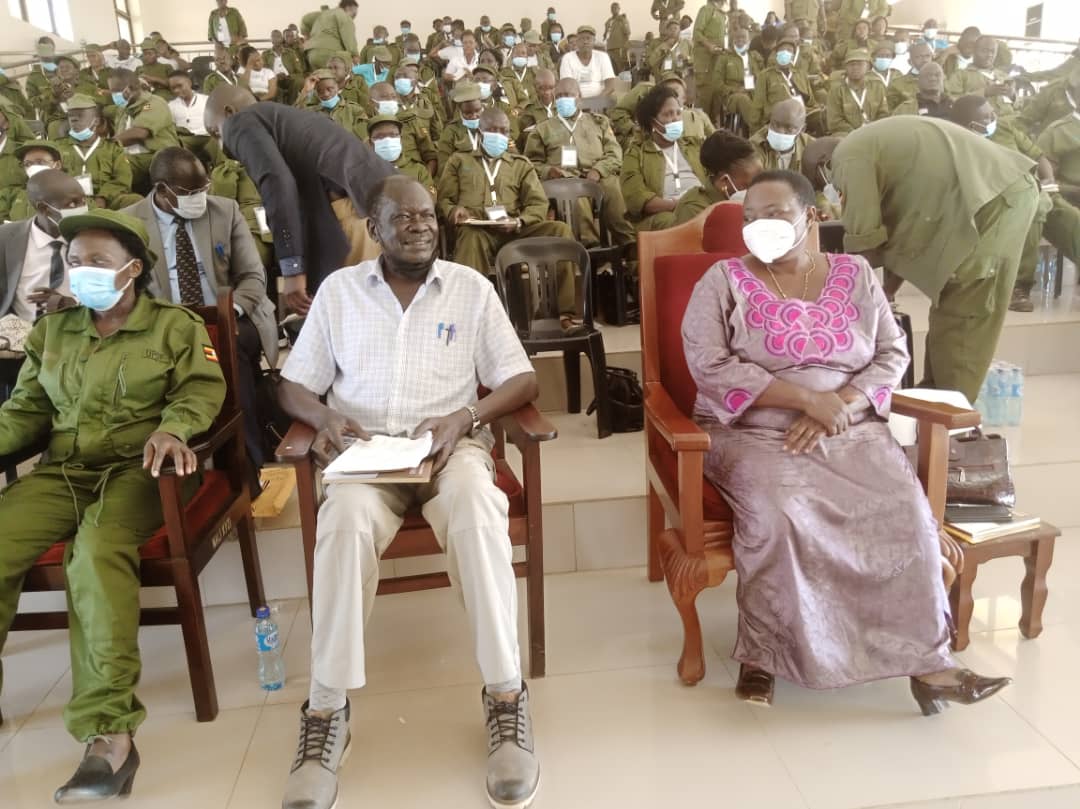 These days when you bump into premier Robinah Nabbanja getting near a hardware shop, wonder no more. Nabbanja maybe be hunting for a serious padlock to lock up the office of Eng. Hillary Obalker Onek, the minister for disaster preparedness and refugees.

We have learnt that Nabbanja has failed to come to terms with the way her directives to ministers are being violated by mainly Eng. Onek.

Apparently, our Inspectors close to the premier suggested that Nabbanja recently gave directives to ministers demanding that they leave their air conditioned offices and storm the field just like she does. However, inspectors reported that Eng. Onek has not yet warmed up to the occasion and allegedly continues to frequent his office as if there are no more disasters in the countryside.

“Nabbanja directed all ministers to be out of office. They should feature in the field supervising government work. But mzee Onek has decided to simply sip hot coffee at his air-conditioned office. The fisher woman (read Nabbanja) has decided to put a keen and strong eye on Onek to see if he will not change” an inspector in OPM revealed.

It is not clear why Onek allegedly behaves this way but what we know is that the two principals are bickering over roles in cabinet. Onek a few days ago penned a missive accusing Nabbanja of masquerading in his docket’s work especially after she started storming disaster hit areas without his knowledge or input. Onek even threatened to resign his cabinet seat if the lady from Kakumiro didn’t change her methods of work.

However, Nabbanja took to the media and accused Onek of gross indiscipline.
Their feud was only quelled after the intervention of the vice president Maj. Jessica Alupo who tried to reconcile the two.
Now, the latest is that Onek seems to be violating the cessation of hostilities agreement as mediated by Alupo recently.

He is now accused of alleged insubordination especially after refusing to heed Nabbanja directives. Onek was clear in his missive against Nabbanja saying she needed to style up and quit encroaching on his mandate as sector minister for disaster preparedness and refugees. He asked her to concentrate on coordinating government programs and policies but not appearing to be doing his field work.

“If I may ask, how many projects are under Disaster preparedness docket?” An inspector close to the premier asked revealing the mood back at her office.

“For example the Refugee camps, the floods hit area from Buliisa to Bududa, refugee land wrangles etc. Now if the PM visits a given disaster hit area who is supposed to do a follow up? Secondly out of the numerous disaster areas how many did Nabbanja visit and how many were left unattended too?” The inspector explained.
According to Inspectors, Nabbanja feels that before she came on the scene as PM, there were several disaster hit areas but Eng. Onek never visited them.

“How many disaster hit areas did Onek visit and solved to logical conclusions despite the huge budget he has been handling? If PM moves to Ntoroko what stops Mzee Onek from moving to Bududa? Is it lack of fuel, driver, escorts or?” An inspector added.

WHY NABBANJA IS SUSPICIOUS?

According to Inspectors, Nabbanja suspects Onek of being a spy in cabinet. It was reported that when Onek outted his missive against her, Nabbanja had vowed to deal with Onek decisively only to get a hair-raising Intel from some of her pals.

In that alleged brief, Onek was allegedly painted a spy who has been reporting several premiers to the president secretly.
Inspectors revealed that Onek is one of the ministers who enjoy close contact with president Museveni and it is through this alleged closeness to the president that he sometimes tables hot info about the premiers.

Inspectors revealed that Onek secured this previledge through refugees the reason Museveni has kept him here for over a decade. It was reported Museveni is happy with Onek for steering the refugee affairs because he (Museveni) has direct interest in it in order to potray Uganda as a hospitable country.

“It has emerged Mzee Onek has been using a threatening posture of reporting by blackmail PMs to the President because he had been enjoying a special place in eyes of the President who treasures refugee in turn who paints Uganda as a hospital place on earth.

Therefore, they (PMs) have always treated him a special case but this time round, he landed on the fearless Woman from Kabalega’s Land. Nabbanja also makes direct communications with the President. The actions by Onek emanate from this loss of president’s attention” an inspector added.

Interestingly though, the same Museveni rewarded Nabbanja with the PM office especially after she successfully spied on the parliamentary commission chaired by then female speaker. It is out of Nabbanja’s actions that Museveni got to know all the dirt in parliament and those behind it.

The president has since overhauled the entire administration of Parliament including the former clerk to parliament Jane Kibirige Lubowa who was fired with total disgrace to the nation.
No wonder, Nabbanja is currently leading OPM staff including Onek in Kyankwanzi for proper alignment.