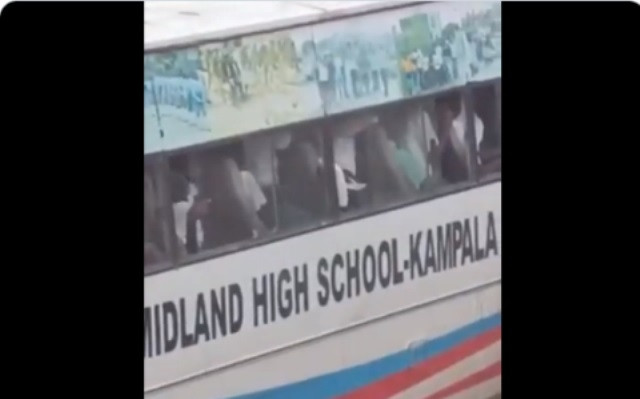 Ever since the covid-19 lockdown dawned on the country, almost all problems, national and global, have been blamed on it. The latest to push the blame to the Covid lockdown is FX Kyasa, the header of Kawempe based Midland High Sch.

According to Kyasa, the prolonged lockdown led to a deterioration of school children’s morals, so much that currently they are almost untamable.

Kyasa made the revelation in a press conference he convened at the Midland school premises in the wake of the viral students’ bus romp video scandal.

The headteacher revealed that ever since students stayed home for over two years of the lockdown, they learnt so many bad manners which schools are finding very difficult to manage.

“I want you to understand that this current crop of students that we have in schools today is very difficult to handle; especially ever since the outbreak of the Covid-19 pandemic and lockdown,” Kyasa told journalists.

While absolving his school from any blame, Kyasa reiterated that the students in the bus were not from midland high school but were rather from Lubiri High School which hired the bus to transport their students to the Jinja agricultural show on June 10, 2022.

Kyasa’s denial followed a written statement the school issued together with a receipt proving payment of shs1m which Lubiri High School paid as fees for hiring the bus.

“We, Midland high school have very unfortunately been appraised of happening on our school bus hired by another school (Lubiri High School) for an agriculture tour to Jinja today, Friday w0th June 2022. These were not students of our school,” Midland High School said.

However, confusion ensued after Lubiri high school equally denied knowledge of their students engaging in the ribald acts which were recorded in the viral video. In a statement issued after the video went viral, Lubiri said: “There is a video circulating on social media involving misconduct of some students on a school bus. Lubiri High School however distances itself from it and any involvement thereto. We are an institution built on imparting discipline and cultural norms to the young generation. We therefore condemn such misbehavior. Investigations are underway in regards to its authenticity.

Police have since launched investigations into the video.

Meanwhile, the video touched off concerns of deteriorating morals among school children, with more videos of students’ involvement in explicit actions emerging later on. Below are some of the shocking videos.