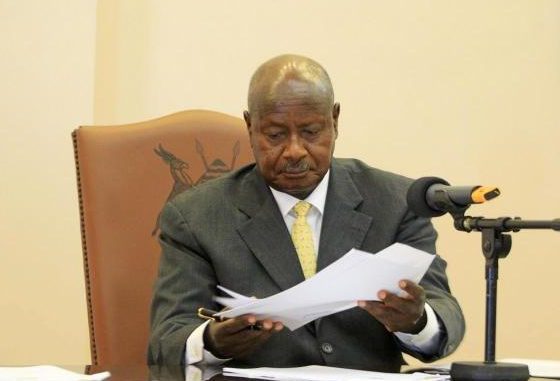 The unceremonious silence by hitherto ranting former Residence District Commissioners (RDCs) is not by any mistake; this News site reports!
We have it on good grounds that these men and women who had even formed a negative group of sorts allegedly managed to secure a sizeable amount of cash totaling to over 2billion from President Museveni.

“He called them aside. Don’t joke with that man. Most of these RDCs were freedom fighters who delivered NRM victories and also delivered him as a person. He couldn’t let them go like that” says an inspector.
We’re told Museveni pleaded with these RDCs not to abandon him hence the reason he had to sit them down and forge a strategy.

“Comrades, you should never walk away from me. Never stop supporting service delivery. You must be productive” an inspector quoted Sevo as telling his men.
To prove how he wanted them around, we are told Museveni forked out a staggering Shs400m to some of them while others got more than that figure to enable them go and do other work since they had been knifed.

It should be recalled that the list for RDCs kept leaking on many occasions and at the end of the day, many historical RDCs had been knifed and replaced by youthful ones mostly those who worked at the Office of the National Chairman at Kyambogo. The list outed by presidency minister who is also still the Kyambogo boss Milly Babalanda left many people speaking in tongues with some of the knifed RDCs claiming that bribery was at center stage to appear on the list.

An MP David Kabanda even came out and alleged that to appear on that prestigious list, one had to cough Shs25m, an allegation that was rubbished. The list caused a lot of uproar that even in some instances, the RDCs who were knifed or transferred like in the case of Luweero refused to handover office.
Out of that hullabaloo, the enraged RDCs formed themselves into a pressure group that threatened to tear up the security network.

“You can’t have someone who has been the head of the District security committee or City security committee gang up to speak against the state. This threatened the security of the country. These people had worked so hard and some of them were privy to sensitive files. That’s why he called them aside and financially massaged them” says a top Inspector.

It was also reported that for Gen. Museveni to have acted that way, it was as a result of an Intel suggesting that the people (RDCs) in the north were gambling that their sons majority of whom had been recommended by Jacob L’Okori Oulanyah had been all sent packing. It’s should be recalled that the RDC list came out around the time Oulanyah had died but his body hadn’t yet returned. This announcement of the list that left all people he had recommended fired allegedly caused uproar among his tribesmen who saw it as political witch-hunt against Oulanyah. And because the ministry for presidency is headed by a lady from Busoga and Kamuli district in particular, those who knew about his rivalry with former speaker allegedly took it that politics had played a role in the list’s generation.

“Mzee acted very fast to save the situation. They had started asking why the list came out after Oulanyah death. To make matters worse, his people were all fired. But government had to move on! So, it was right for Sevo to intervene” says an Inspector.

This report comes after another one we reported suggesting that President Museveni had given Shs2m to each NRM EALA aspirant last week after they agreed to quit the race to have the incumbent MPs retain their seats. Unfortunately though, the candidates even after gambling their MP bid by eating the 2m, are now back in the media clamouring for ‘internal democracy’ to prevail. The president also reportedly promised to give some of them financial bail out to start businesses. Watch the space!