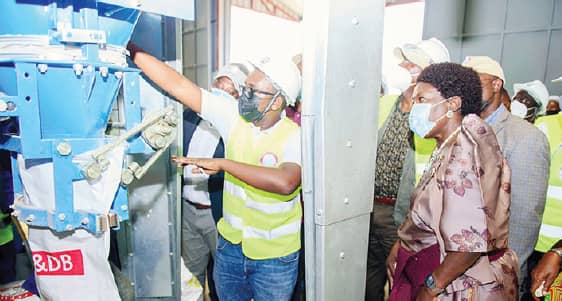 Mid this year, Senior Presidential Advisor on Busoga in charge of poverty alleviation Florence Mutyabule traversed the whole of Busoga marketing the various activities that are taking place at Kamuli-based Kasolwe Livestock Farm.

This farm with state of the art facilities is run by the National Animal Genetic Resources Center &Data Bank (NAGRC&DB) an agency under MAAIF!

Among the items that mostly caught the attention of district leaders was the Feed mill unit which they said was a strong bullet to answer the never-ending cries for market among Busoga grain farmers.

Mutyabule met district leaders at their respective district headquarters and asked them to mobilize farmers to produce raw materials for the feedmill at Kasolwe. The raw materials included maize, soybeans, cotton seed among others as the mill needs them to produce cheap and highly standardized animal feeds for poultry, diary, rabbits, fish among others.

“We have been crying about market. Kasolwe is here. We don’t want any more excuses. Even as our people await for quality animal and fish breeds from Kasolwe, here comes an opportunity for us to make instant money. Kasolwe feedmill needs raw materials to make animal feeds. Mobilize people to grow those raw materials” Mutyabule told the district leaders including those in the Island district of Namayingo.

Now, the latest good news is that the current rains have seen farmers respond positively to the call. Many of them have grown grains and are only waiting harvest season before knocking on Kasolwe’s doors for market.

Ezekiel Mukama, a farmer in Mayuge used to venture into sugarcane growing. But upon hearing news about lack of maize, he destroyed cane plantation and waited for the rains to plant maize.

“I am now waiting to harvest all this and supply. However, me and many others don’t know the supply chain. How do we reach there? Is there going to be a central collection center or we have to transport it ourselves? We also need to be sensitized on harvest and storage for quality control” He said but was however, hopeful that this time, his farming bet will fetch him a good kill!

To Mutyabule, this kind of response means people want to engage in meaningful Agriculture but only need guidance.

“I am happy they responded and I want to commend the district leaders for the mobilization. If we continue like this, this song of poverty in Busoga will gradually change” she said adding that farmers will be guided on the procedure to supply the feedmill after consultations with management.

This feedmill was launched on February 27 2022 by Rt. Hon. Rebecca Kadaga the minister for EAC/first deputy premier. On the same day, she commissioned a multi purpose poultry hatchery. She commended NAGRC &DB for making this farm a reality.

According to Kasolwe farm manager Daniel Epinyu, the mill produces a variety of quality animal feeds for cattle, goats, poultry, pigs and fish. He said it produces 5tons of livestock feed per hour, 3tons for mash feed and 2tons for pelleted feed among other functions.

“In just a few weeks since we started operations of this mill, I am happy to see farmers are seizing the opportunity to sell to us farm produce” he told Kadaga at the launch, adding that even cane growers have benefited a lot as they sell to the farm sugarcane offshoots in tons and tons.

Indeed, according to NAGRC &DB one of the hitherto struggling local farmers Ahmed Kibedi is now singing praises for the feedmill.

Having spent over 20years in sugarcane growing but with limited results, Kibedi was contemplating cutting his plantation to venture into other crops with huge demand as raw materials for making booze by beer companies. A wind of fortune however, blew his way in the name of the Kasolwe feedmill.

“I have been able to sell 3tons of cane offshoots to the feedmill and I feel relieved” he says adding that with this ready market for raw materials at Kasolwe, he now thinks of expanding his plantation.

According to NAGRC&DB Executive Director Dr. Peter Beine, the goal of the National Development Plan III for FY2020-2025, is to increase average household incomes and improve the quality of life of Ugandans.

“Therefore, as a key player in NDPIII agenda, NAGRC DB will strive to enhance value addition in key growth opportunities while strengthening the private sector capacity to drive growth and create jobs. Our activities will focus towards enhancing the competitiveness of the livestock industry in Uganda” he says and commends his staff for the job well done.

Meanwhile, in a recent tour of the various farms under NAGRC &DB, Members of Parliament on the Budget Committee commended the works as being undertaken by this entity.

The members numbering 40, toured NAGRC&DB enterprises in Entebbe, Lusenke and Kasolwe government farms, on a fact-finding mission to know where government puts its resources.

At the Entebbe Livestock Experimental Station, the MPs were amazed by the healthy exotic dairy breeds of Jersey and Ayrshire, which are renowned for their high productivity.

Dr. Beine, noted that genetic selection for greater productivity and enhanced fitness of Jersey and Ayrshire breeds has produced impressive results since their importation at the start of the year.

At the National bull stud, MPs were mostly awed by the tropicalized Brahman beef breeds that weigh over 900kg, while at Kasolwe, the MPs toured the new state-of-the art feed mill and hatchery, which have greatly subsidized costs of feeding animals at the farm.

At Lusenke farm in Kayunga is a new stock of Jerseys and poultry projects which serve smallholder farmers in Kayunga and nearby areas. At the end of the tour, the MPs bought kuroiler birds at affordable prices to benefit their various communities.

The farm is one of several government facilities managed by NAGRC&DB and that this is part of the fulfilment of the Busoga livestock transformation intervention that started in 2019.

Located in Busoga sub-region, the farm has positioned itself as the most resourceful government ranch in the eastern region with key agro enterprises promoted including intensive and semi-intensive dairy production, meat goat production, multipurpose poultry, piggery, fish farming and animal fodder production. Others are compounded animal feed processing and packaging and skilling.

The farm has been working with satellite livestock and fish farmers to identify and remedy bottlenecks to profitable commercial farming.

“I’m proud that many of them have already formed breeder associations to help in the multiplication of good genetics of dairy, beef, pigs and goats,” farm manager Daniel Epinyu adds.