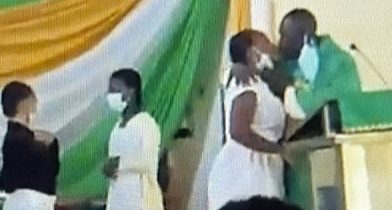 The devil that has befallen the Anglican church seems to gain more strength each day that passes; our Field Inspectors (FIP) have established.

In a scandal that is already being investigated by the top church leadership, one of the Reverand Fathers is under investigation on allegations of turning the pulpit into an opportunity to give lip service to youthful girls who go for holly sacrament.
The clergy identified at Rev. Fr. Obeng Larbi heads St. Monica’s College of Education found in Ghana.

According to a statement by the Internal Province of Ghana Anglican Communion issued by its executive director George Dawson Ahmoah, the clergy is to face the full wrath of the law if he is found culpable.

“The church was saddened by the news and wishes to state expressly that a thorough investigation into the matter has been instituted and the action of the said priest would be dealt with in accordance with the norms and values of the Anglican Communion where morality is extremely revered in the church” a statement according to local press in Ghana reads.

The video which went viral shows the clergy placing a hot kiss on two beautiful students on the state and that these students were all smiles. However, when he tried to do it to the third gal, she hesitated but the randy priest finally did what he wanted.
The church said they besides the investigation, they were going to counsel the gals to avert any psychological effects arising from the pastor’s actions.

Such acts aren’t new in the church. Here in Uganda, former Arch Bishop Stanley Ntagali is still grappling with a scandalous act of alleged adultery. He not only cheated on his wife but also went ahead and snatched a wife of his colleague Reverand. Interestingly, this Reverand is also reported to have snatched the woman from one of his congregants in the local church who went for Kyeeyo.

Ntagali is currently in the news for the negative side after the babe he allegedly ballooned and dumped threatened to spill the beans. The matter is now subject for investigation by the Church top leadership.
Another Reverand was sometime back stripped of his titles after he together with other three Reverands fought over the pregnancy of one of the ladies in the church choir. The list is endless.