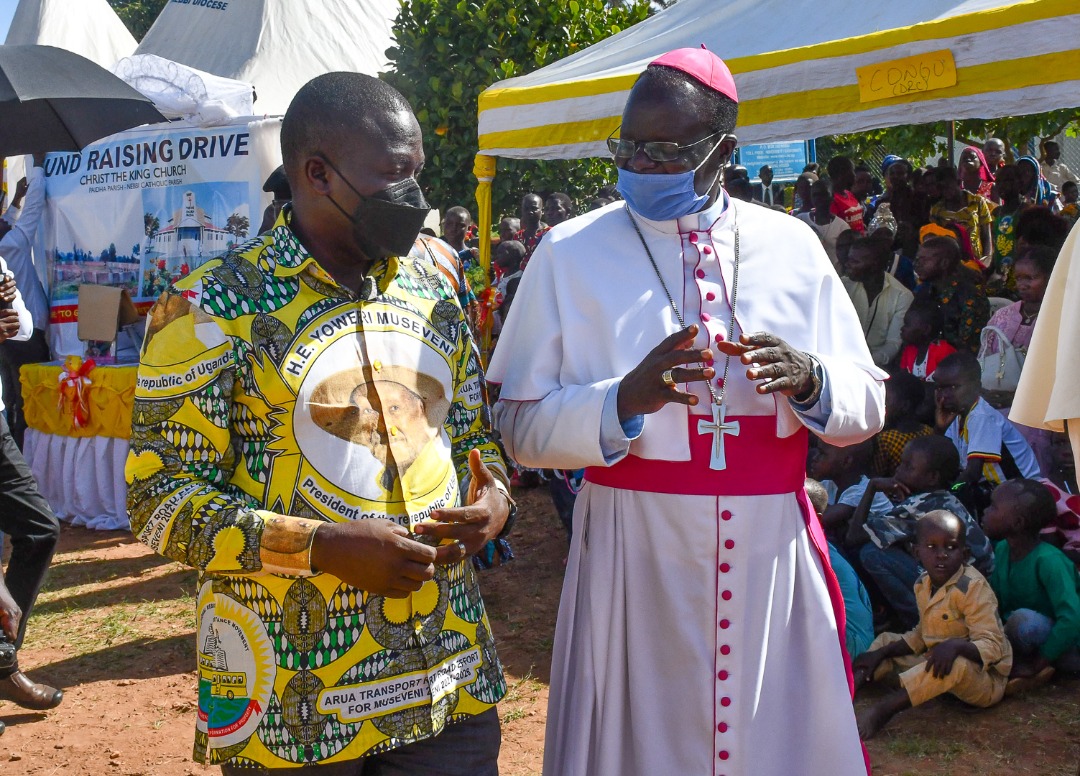 SG Todwong at the Christ the King church fundraising

Opposition parties-FDC and UPC are nursing more political misery after 700 of their supporters in Zombo district dumped them for ruling party-NRM.

These coverts have already been received by NRM SG Richard Todwong Awany.

Todwong who was accompanied by senior party leaders from the national secretariat arrived at Bar-Okoro stadium, Paidha Town Council in Zombo District and was received by Hon. Grace Freedom Kwiyucuny, the State Minister in charge of Northern Uganda.

“I want to appreciate all the converts for taking a right decision to join a party that stands for right ideologies.
It is only the NRM which; since its formation has strived to better the lives of each and every ordinary citizen” he said citing initiatives like the Parish Development Model and emyooga which he said if embraced and utilized well shall transform people’s families.

He informed the defectors that they  had made the right choice which they will not regret.

Todwong however, urged them to come into the party with commitment and faith to dedicate their energies in ensuring that NRM remains in power to fulfill all its pledges to the citizenry.

“We shall train you on how to live with faith in the NRM. In return, the Party will not give you money or jobs or anything, but we shall maintain peace & stability, and ensure that we develop Zombo through constructing roads, health centers, and schools,” Todwong said.

Todwong informed the gathering that President Museveni was aware of the bad state of the road from Paidha to Vura via Zombo and was committed to tarmacing it in the near future.

“When we were drafting the NRM manifesto, it is the President himself who called and directed that your road be included among those to be tarmacked under the current manifesto. I am therefore sure President Museveni knows about this road,” Todwong said as he appealed to the leaders who raised the road concern.

The converts however, asked Todwong to deliver their request to the appointing authority for job placements such as being posted as RDCs and other positions so as to serve the people.

Meanwhile, hon. Grace Freedom Kwiyucuny, the state minister for northern Uganda was all smiles towards Gen. Museveni for endeavoring to keep the West Nile peaceful and stable from the rebels harboring in the neighboring DR Congo.

“The president has done a lot to us which gives me confidence that even the few remaining issues that affect our people here in Zombo and the entire west nile area shall be dealt with.” she said.

The Secretary General was in company of senior party officials from the secretariat who include; Deputy National Treasurer, Hon. Jacqueline Kyatuheire, director for mobilization, Hon. Rosemary Nansubuga Sseninde.

AU Chairperson condemns attack on ATMIS base in Somalia