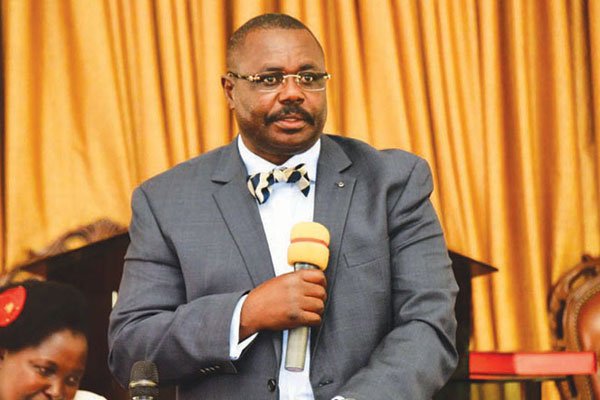 President Yoweri Museveni is once again said to be faced with a new task to help sort out the NRM squabbles for the position of NRM vice chairperson-Northern region. The region has three blocks including West Nile, Lango and Acholi. With it’s leader Jacob L’Okori Oulanyah now lying lifeless, the seat has fallen vacant just like it was the case with his speakership job. Museveni has however, hurriedly filled up this gap within four days after Oulanyah demise and had Oulanyah’s former deputy Anita Among take over as speaker. The focus now is on his other job as NRM second in command in charge of northern region comprising West Nile, Lango and Acholi sub regions.
In this detail, we reveal what you didn’t know on how, the three blocks have been at war wanting to ascend to the NRM CEC.

In one of the NRM NEC meetings at state house-Entebbe, President Museveni also the NRM chairman faced a challenge on who was to become the NRM second national vice chairperson.
On one hand, he had deputy speaker at the time Rebecca Kadaga while on the other he had Zoe Bakoko Bakoru, the then minister for gender, labour and social development. This was before the dark-skinned Bakoko fled the country following the NSSF scandal.

Kadaga’s stance according to Inspectors in that meeting was that; her region of Busoga had resoundingly voted for Museveni while Bakoko’s West Nile region had voted opposition Reform Agenda candidate Kizza Besigye. As for Bakoko, she only rode on the issue of regional balance in NRM top leadership.
Bakoko we’re told had the full backing of Gen. Moses Ali, currently the deputy leader of government business in parliament.
The duo allegedly suggested that it was only fair for the West Nile region to also be represented in the NRM top brass leadership, claiming that their region was being marginalized.

Kadaga according to Inspectors, also told Museveni there was no way she was going back to explain to the Basoga that with all the overwhelming support they gave to the president, he paid them back by sidelining their chief mobilizer and daughter Kadaga when it came to sharing the NRM cake.
“What do you want me to tell those Basoga? That you voted well but your candidate didn’t appreciate what you did for him? How many votes did you get from West Nile?” An Inspector in the meeting quoted Kadaga as asking the man with a round hat.
The president is reported to have briefly suspended the proceedings to allow him engage the two ladies and his other strategists before taking a final decision.
When he returned, he scanned through the audience rolling his eyes in the socket several times possibly looking for Gen. Moses Ali.

At that time, Museveni realized Moses Ali had excused himself from the meeting. He cleared his throat and then roared thus:
“I very much wanted to say this when Moses Ali is around. He and his people are saying that they are being marginalized. But how? Now you hon. Bakoko, I want to ask you, what do you still want? I have given you the most powerful ministry in the land. You have six departments in that ministry which in actual sense they are supposed to be independent ministries. Why don’t you concentrate on that? That ministry is very important that’s why I don’t just give it to anyone. You’re a super minister” an inspector quoted Museveni as telling the meeting.

As he said this, Kadaga was wearing smiles on her cheeks after all, she had already read the mood in which Gen. Museveni was speaking to Bakoko. Eventually, Kadaga was awarded this position which she still holds to date.
For Museveni to have asked Bakoko to retain her job, he was trying to open the eyes of the West Nilers that the gender ministry was a no go zone for any ambitious creature especially those men who were in the bush with him.
Indeed records show Museveni has always appointed women to this sector (apart from Gabriel Opio) and has consistently sidelined his male bush war comrades from coming to this sector as senior ministers. It is not clear why but according to Inspectors, Museveni thinks this sector is fertile ground for secret mobilization and recruitment for political subversion. “This ministry deals with all regions, traditional leaders, chiefs, youth and women, elderly, workers, trade unions etc. These are key when it comes to mobilization. Giving it to an ambitious person would be a mistake. He will mobilize those kings, clergy, youths and women against you. I think that’s why he (Museveni) deploys there women or politically-impotent men. You can’t see any man who was in the bush and he is posted there. Not even Nadduli or Otafiire yet they are loyal” an inspector said.
When this deal for West Nilers to dine on the NRM CEC through Bakoko Bakoru failed, another opportunity availed itself. The position of NRM vice chairperson-Northern region had to be filled in 2010 at Namboole. Here, Moses Ali contested alongside Hillary Onek (Acholi) and Sam Engola (Lango). Engola finally won the race and ruled for 10years before Jacob L’Okori Oulanyah laid a serious ambush against him and ousted him in 2020.

Oulanyah managed to defeat Engola badly because the incumbent was tainted with allegations of formenting divisions in the party in the north and also wasn’t on good terms with many senior NRM members in the north mainly Lango. In fact, most of these are itching to teach him a lesson if he ever shows interest in the same position.
“Most of them are willing to go an extra mile of leading crusades across the three regions to defeat him. At least they will bring an 18-year-old to contest but not to back the former minister” says an Inspector, adding that the infighting in NRM during Engola reign explains the annoying support NRM used to register in the north until the situation changed when Oulanyah came into power a year ago.

“Oulanyah worked hard to win support for the party in Northern Uganda. We shall forever celebrate his life for this. He did a great job especially in the north when they had not accepted the movement in that region. That’s why we won the north in the just concluded general elections” said NRM vice chairman Al-Haj Moses Kigongo while at NRM headquarters last week.
With Oulanyah now no more, latest info from the north suggest that several individuals are secretly warming up to take over from him. Among these is Engola himself, Adupa Ogwech, Jane Ruth Acheng and Hamson Obua. The last two ministers are however, yet to come out to express full interest but their supporters think, they can easily carry on the mantle now that Oulanyah is no more. All the above mentioned are from Lango.

The other sub regions including Acholi and West Nile are yet to forward any name and it’s not clear whether Moses Ali and Onek are willing to return to the boxing ring. Onek already received the backing of Acholi MPs recently when they fronted him to vie for the position of speaker to replace Oulanyah only for the man from Lamwo to chicken out. To ensure the West Nilers are also accommodated in CEC, Museveni has also appointed Hon. Huda Oleru (former MP Yumbe) as his special representative to NRM CEC in what was seen as a move to ‘balance the boat’
Oulanyah himself is reported to be a Langi although he spent much of his life in Acholi implying that his leadership in CEC primarily benefited both Acholis and Langis. However, his mobilization extended to the three blocs and he painted all of them yellow, meaning none of them supercedes the other in terms of loyalty to the ruling party. Political pundits now suggest, Museveni may have to urge consensus building among the three blocs as all the primary parameters were all fulfilled by the three blocs.

“He has no way out. His hands are tied up on this. The three blocs voted NRM all. He either has to urge consensus or dictate. But it’s a tricky game for him” says an Inspector in NRM NEC.
Watch the space!