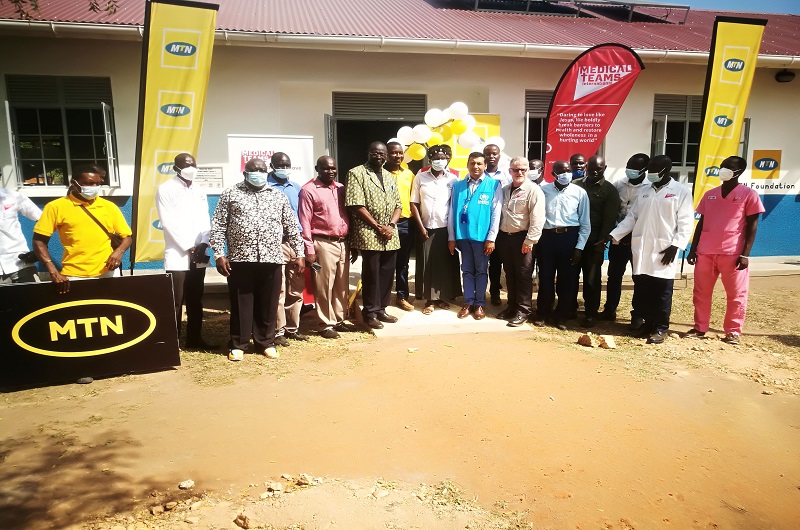 OBONGI. The refugees and the host communities of Palorinya settlement in Palorinya sub-county, Obongi district were on Wednesday treated to untold happiness when MTN Uganda, the Uganda’s leading telecommunication company handed over a well-furnished maternity ward at Ibakwe HC II to the local leaders of the district.

The Shs400Million maternity ward was constructed and fully equipped by MTN Uganda foundation in partnership with Medical Teams International (MTI), the Office of the Prime Minister (OPM) and UNHCR.

While handing over the facility, Phillip Odoi, the MTN Regional Business Manager Northern Uganda said the corporate social investment in Ibakwe HC II by the MTN Uganda Foundation is part of the Shs1 billion pledge made to the Office of the Prime Minister through UNHCR at the refugee summit in 2017.

“This project is aimed at improving health services in this particular area. The project was completed much earlier but we didn’t hand it over because of the window in between the lockdown and of course, the tough times of the Covid-19 pandemic,” Odoi said.

He noted that over the years as MTN, they continued to create meaningful and strong collaborations and partnerships, all aimed at improving health and wellbeing of the people of Uganda.

“MTN, way back in 2017 committed Shs1 billion to OPM through our partner, UNHCR and of course, a lot of that has gone to equipping Ibakwe HC II before us here which is a newly constructed maternity ward to overturn the long-term challenges of overcrowding and maternal health,” Odoi said.

He observed that the maternity ward is fully equipped with running water, electricity, maternity beds and general hospital beds which will go a very long way to improving maternal health services at Ibakwe HC II.

During the handover ceremony, Evelyn Atim who had just delivered a bouncing baby girl in the facility expressed happiness to MTN Uganda, saying the comfort of giving birth in such a new maternity ward has brought a lot of joy in her heart.

“I am very happy for MTN for constructing this facility here. We used to suffer so much as expectant mothers in this area. Before the construction of this facility, we were moving several kilometers to Palorinya HC III or Moyo General Hospital to give birth which was so costly for us in terms of transport. Now that MTN has constructed this maternity ward here, I am so grateful to them,” Atim, a refugee at Palorinya settlement said.

Mahad Abdulmalik, the in charge of Ibakwe HCII noted that the health centre serves refugees and the national population of 11, 225 people of which 8,859 are refugees and a total of 2,366 host communities. He added that in total, the health facility has 31 technical and support staff who are now in dire need of accommodation facilities.

Similarly, Simon Masereka, the MTI programs manager at Palorinya refugee settlement said the catchment for Ibakwe HCII that was built for 2, 000 patients at that time had to be stretched to over 10, 000 by the influx of South Sudan refugees in 2016.

“This means increasing the catchment, everything needs to increase from the staff to the health infrastructure, equipment and to everything that was meant to serve this community and that is why, partnerships started to come in to supplement the district’s effort to deliver health service. This facility particularly, is out of a partnership between MTI and MTN Uganda brokered by UNHCR at a higher level for which we have been able to deliver,” Masereka said.

In his remarks, Dr. George Bhoka Didi, the Obongi County Member of Parliament (MP) commended MTN Uganda for being a responsible corporate company.

He said the project demonstrates MTN Uganda’s corporate citizenship to the community that gives the company business by buying airtime, using mobile money services, data and other telecom services that MTN offers.

While presiding over the ceremony, Rtd Capt. Matata Buga, the Yumbe Resident District Commissioner (RDC) equally expressed gratitude to MTN Uganda for thinking of constructing the maternity ward in the district. He urged the company to continue partnering with the government of Uganda in improving the lives of the people in Yumbe district and the country at large.