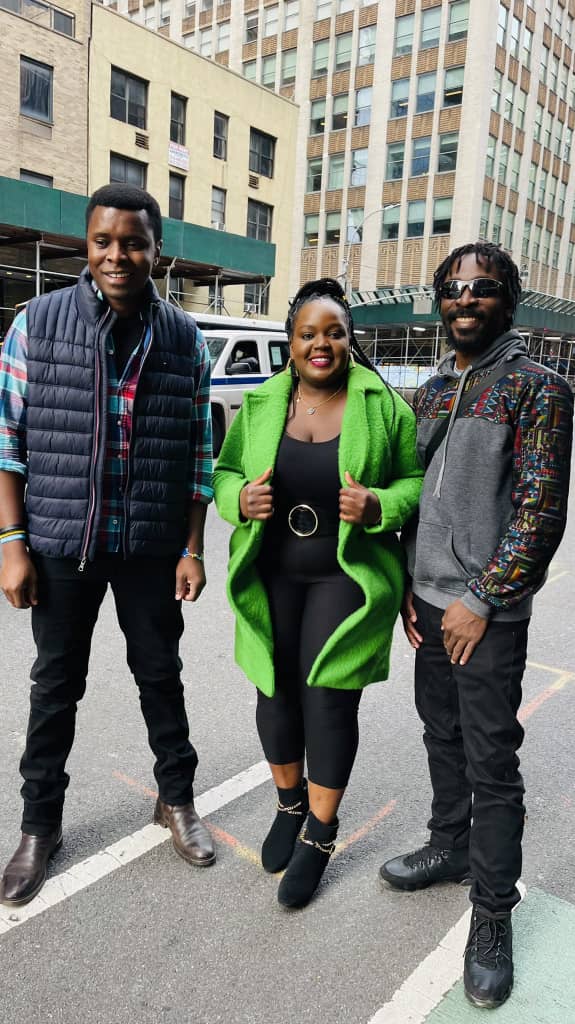 The closeness between Human Rights activist Hillary Taylor and New York-based Ugandan scribe Remmy Bahati has started to attract the attention of their followers!
It’s not clear what’s exactly between the two Ugandan creatures but what we can say is that they are indeed getting closer each day that passes!

Popularly known as Justice Hunter, Hillary went to school at Harvard university in the US while Remmy also studied at Colombia university, also in the US. With Bahati staying in New York and Hillary in California, the duo none the less find time to put their normal works aside and whisper to each other’s ear sweet messages that usually leave either side smiling from ear to ear!

Those who follow them on Twitter suggest that the duo hardly spend a day without showering each other with sweet messages as their followers at times question the chemistry that exists between them. Hillary is heavily followed on Twitter and so is Bahati!
In fact, their relations reached a boiling point last week as one of the followers landed on their pic as they strolled the streets of New York alongside Human Rights lawyer Isaac Ssemakadde a.k.a Legal Rebel.

Pius Jadwar one of the followers sarcastically tweeted upon seeing the pic that ‘Freedom fighters, Naye @HillaryTaylorVI ngambira kojja wange @Isaac Ssemakadde angambire @Bahati Remmy nti tusiima’
It all started after Hillary posted a picture of himself, Bahati and Ssemakadde wherein he captioned it thus ‘Legal Rebel, Avowed News Junkie and Justice Hunter’
Bahati was quick to also reveal something about how she and Hillary together with Ssemakadde had spent the day together.

“I met the Justice Hunter@HillaryTaylorVI and Legal Rebel@Isaac Ssemakadde in New York. They fight like hell for human rights and exude confidence that every person in our generation should have. Our sense of humor is exactly the same and spent the whole afternoon laughing” she said attracting a line of responses from followers some of whom questioned the chemistry between them!

Well, those who didn’t know Hillary is a also a Ugandan born and is the man giving Gen. Museveni and his government sleepless nights especially due to his numerous protests in the Diaspora against the proposed construction of EA Crude Oil Pipeline Project (EACOP).
We’re told Hillary was actually the man who reached out to the EU nations resulting into their regional parliament passing the resolution denouncing the EACOP. He is a highly trained boy in human rights law and other related subjects the reason he even scooped a place at Harvard.
It’s not clear whether he has interest in exploring the oil wells of Tooro where Remmy hails from, that he now keeps around the gorgeous babe from Omukama Kabamba Iguru’s land.

“I swear, these two must be working on a private project. The way they are they are giving each other attention and company is leaving nothing to imagination. Is Hillary interested in drilling Tooro oil? We wait to see” says an Inspector who has been following the duo on Twitter.
An inspector suggested the duo has hinted on a plan to go for a break in Les Vegas soon to possibly further their discussions.

Bahati these days looks so appetizing that even a weak top clergy may be tempted to throw her a word in private. She’s said to be single and so is Hillary! Bahati recently faced a traumatizing situation after some people allegedly kidnapped her relatives but were eventually released.

Hillary who’s a human rights activist was among those who are said to have missed even their meals as he shared the agony with Bahati. Thank God, they are now free. Well, our Inspectors landed on some of the pix and here we go!
Watch this space!