Taking to his twitter account last night, Wetang’ula who is also the leader of the FORD-Kenya party, described Muhoozi’s tweets as ‘nonsense’ whose aim is ‘clout-chasing’.

“A whole commander of land forces @mkainerugaba tweeting nonsense in the name of chasing clout. what a shame! Uganda is just a meme country!” Wetang’ula tweeted at 8:18pm last evening.

Arguing that the careless tweets undermine the spirit of the EAC, Kiprotich tweeted at 8:29pm thus: “I expect the Ministry of foreign affairs to summon the Ugandan ambassador to shed light on Gen. Muhoozi social media outbursts and subsequent apology. This is undermining the spirit of unity of EAC.”

Kainerugaba, a high-ranking Ugandan Army General, touched off a diplomatic storm following a series of tweets in which he commented on the political affairs of Kenya. As reported by Star newspaper, Muhoozi first tweeted that he had held talks with former President Uhuru Kenyatta and that the former Kenyan leader was going to visit Uganda soon.

“Just spoke to my big brother, Afande Uhuru. An incredible man! I love him for his courage, honesty and intelligence! He will visit Uganda soon.” he tweeted, accompanied by two photos of Kenyatta.

After a short while, Kainerugaba lamented Uhuru’s departure from power, tweeting,” My only problem with my beloved big brother is that he didn’t stand for a third term. We would have won easily!”

That tweet was later followed by a storm of unprovoked tweets that saw him mock Kenyans’ strict observance of the rule of law and obedience to the Constitution.

“Haha! I love my Kenyan relatives. Constitution? Rule of law? You must be joking! For us there is only the Revolution and you will soon learn about it!” he tweeted.

The tweet attracted anger and dismay from most of his Kenyan followers as they flocked to the comment section to rail at him.

A few moments later, he tweeted,” It wouldn’t take us, my army and me, 2 weeks to capture Nairobi” further confusing many and shattering Twitter.

Muhoozi went a little deeper, shockingly referring to Kenya as ‘our district’ and claiming that, in two weeks, he will have captured Nairobi.

“I’m happy that members of our district in Kenya have responded enthusiastically to my tweet. Its still 2 weeks to Nairobi!”

The General kept the taunts coming asking, “After our army captures Nairobi, where should i live? Westlands? Riverside?”

However, Muhoozi’s tweets have elicited furious reactions from Kenya, with many terming them as having the potential to cause a diplomatic row between Uganda and Kenya. Nevertheless, many Kenyans took to twitter to bash Muhoozi, ‘leaving him for dead’.

“dear Kenyans, you now understand what it means to live in Uganda under Gen. Museveni and his son, whom he gifted the highest military ranks and put him in charge of our land forces! Sadly, beneath the senseless tweets lies a monster who brutalizes our people for fun!” Bobi Wine tweeted.

Bobi Wine’s response came a few days after Muhoozi tweeted about him, assuring him how they will never allow him to be president and how he can ably win him in an election.

Below are some of the most stinging tweets, as captured by Kenya’s Star newspaper:

“Ugandans are in trouble.. This is a spoiled brat who wants to succeed his father as the President of Uganda… Ugandans should just turn the country into a Monarch and accept to be ruled by the “House of Museveni” and Queen Janet… When he dies, the son, King Muhoozi takes over,” tweeted a one Juma G.

“Gen. Muhoozi Kainerugaba Museveni, Uganda Army Commander & next President of Uganda says it will take his army only two weeks to take over Kenya! I am yet to hear our Army Commander denying or admitting our Army’s ability to defend our borders from the threatened invasion,” Lawyer Donald Kipkorir said.

Narok Senator Ledama Olekina tweeted, “A man’s worth is not determined by what he revealed to the world but what he hides from the world… Kenya Army stay out! Shhhhhh….”

“The whole of Inspekta Mwala squad would capture Uganda…in 3hrs,” a tweep said.

“The only thing Ugandans can capture from Nairobi is the fake certificate they gave our Governor,” Gabriel Oguda said.

“Museveni’s Son who is seen partying with Uhuru Kenyatta and thinks Uhuru should have run for the 3rd time is Hallucinating on Capturing Nairobi. Nonsense on Steroids. Keep your Nonsense within your borders,” KeeruH@Keerulanah·32m tweeted.

“Museveni’s son shouldn’t tweet while drunk.. he wants to capture Nairobi in two weeks? He must be high on something. He should try and see if he can capture Busia alone,” David Mutai tweeted.

“Leave alone our army, Pokots can overthrow your government in less than 24hrs and force Museveni to exile,” Austin Tunoi said.

“It’s scary this is the guy who is going to lead Uganda. He has been pro Tigray (and Meles was particularly close to Museveni) but man..this guy is unstable.”

“The son of Yoweri Kaguta Museveni now threatens Kenya. According to him, Nairobi is only two weeks, away from his palms. Is Kenya that weak not to defend herself longer than two weeks from Uganda’s aggression?” @tjmokello asked.

“Museveni’s son is trying to use capture-recapture on us, jamani. Someone tell him Nairobi is hotter than faya. He should ask UK,”@JaneFKyalo said.

Dan Nyagah tweeted, “What is that Museveni son talking about? Uganda cannot beat KENYA in anything. They are just NOTHING compared to KENYA.”

“I think Museveni’s son is bored and lonely and he’s just craving for attention to feel relevant so he decided to provoke KOT in order to get attention. Pathetic. A whole military general of a neighbouring country shouldn’t make such reckless statements,” @STonkei commented”

“Kenyan Army can’t engage in useless fights with a poor and suffering nation. Our professional stone throwers from Luo Nyanza and the Pokot bandits are capable of killing all Ugandans including UPDF if given chance. Museveni,” a tweet read.

“East Africa should be united. Forget that mad boy of Museveni. I guess he is looking for popularity,” a tweep said.

“Soon, Museveni will be retracting his son’s sentiments, classifying them as hot air and that he tweeted under the influence of the bottle because he is fully aware kanjo can ruthlessly deal with pearl of Africa leave alone Kenya’s military.”

“Before Muhoozi Kainerugaba, son of President Yoweri Museveni thinks of waging a war with Kenya, let him and his father fight Ebola and Joseph Kony,” Carrington Mwendwa commented.

“Museveni’s son will later say that his account was hacked but in the real sense we know that hackers do not exist in Uganda,” read another tweet.

Meanwhile, the tempers which Muhoozi flared may soon calm down after he deleted his controversial tweets. The deletion was reported by celebrated Kenyan lawyer, Ahmednasir Abdullahi. Taking to his twitter handle at 9:25pm, Abdullahi posted: Uganda’s top army General and H.E. President Museveni’s son deletes tweets in which he threatened to topple president William Ruto, capture Nairobi an base his occupying government in Westlands or riverside estates”.

Just like many Kenyans, Ugandans are also waiting to see how president Museveni will react to the tweets by Muhoozi and the subsequent diplomatic standoff they have caused. It should be noted that president Museveni has in the past come out so strongly on individuals who touch the sensitive topic of regional security; especially those who are seen as intending to foment tensions between Uganda and any of her EAC neighbours.

Recent examples of institutions and individuals that have faced the state’s wrath include Hussein Musa Njuki , the late former editor in chief of the Assalam and Shariat Muslim newspapers who was arrested in 1995 and detained for referring to Rwanda as Uganda’s 40th ‘DISTRICT’ (just like Muhooozi has done this time) then, at a time when Uganda officially had 39 districts. Njuki would later soon die of what was said to be hypertension. And in November 2017, local tabloid Red Pepper directors and editors were also arrested and jailed for one month following the publication of a story that was deemed to have the potential of causing diplomatic tensions between Rwanda and Uganda.

Also earlier in June this year, the daily monitor reported that president Museveni ordered his son to stop commenting about matters of national security and foreign policies on his Twitter account.

The same publication reported that the President expressed utter dissatisfaction with the reckless behaviour of some individuals within the army and warned them to desist from such promiscuity and ‘drunkenness’.

He then asked Muhoozi and other commanders to stop discussing or commenting on international relations issues on social media but instead use the platforms to discuss sports, youth issues, political ideology, and education.

Gen Museveni’s directive then came on the heels of Muhoozi’s tweets which included: declaring support for Tigray rebels fighting Ethiopian Prime Minister Ahmed Abiy’s government, offering to back Rwanda in any conflict, praising himself for managing to restore ties between Uganda and Rwanda where diplomats had failed and also supporting Russia’s onslaught on Ukraine. The tweets also attracted comment from Rwanda president Paul Kagame who offered to edit Muhoozi’s tweets. 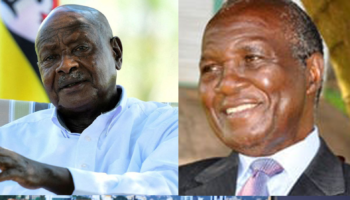