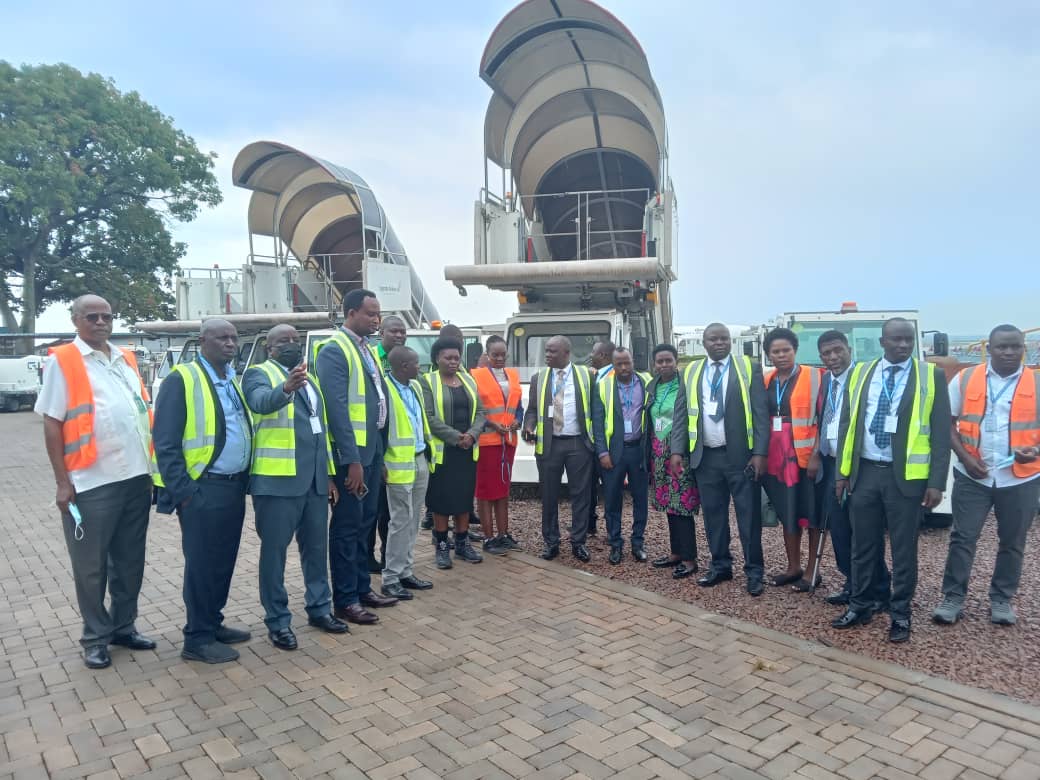 Members of Parliament on a familiarisation tour at Uganda Airlines have hailed the national carrier’s bosses for rolling out a highly robust post-Covid-19 recovery plan.

Led by David Karubanga their chairperson, these legislators who sit on Parliament’s Committee on Physical Infrastructure were at the Uganda Airlines base in Entebbe to acquaint themselves with the carrier’s performance, plans, challenges and their relevant solutions.

To acquire this information, the MPs whose tour started at the airline’s Kampala based office, were taken on a guided tour through the airline’s different departments where they interacted with staff tasked with the various duties there. The legislators also toured the self-handling yard that contains equipment for the self-handling project that is expected to start two months from now.

And speaking to journalists following this expedition, Physical Infrastructure Committee Chairperson Karubanga revealed that members were very impressed with the work that has been done at the airline since it commenced operations in 2019.

He added that although COVID-19 has affected the airline’s revenues, the performance recorded so far is impressive.

“As a Committee, we are going to call the Ministry of Finance and the Ministry of Works and Transport to come and talk to them on the commitment in terms of funding the airline because the aviation industry is global and it has regulatory compliance issues [an airline must fulfill],” he said. Karubanga added that the Committee is happy with the airline’s strategic plan, part of which has a strong post-Covid-19 recovery element. According to Karubanga, the plan shows optimism that the national will continue to grow even stronger despite having been shaken by the pandemic which shook the entire global aviation industry.

As per the strategic plan, Uganda airlines will roll out more aircraft; mid-range aircraft for cargo and domestic flights.

Karubanga added that the Committee supports the self-handling project as it will greatly cut the operational costs of the airline.

“We have inspected the equipment purchased by Uganda Airlines for self-handling project. This means that Uganda Airlines will save on the money it is currently spending on another service provider (DAS). It will also earn more revenue (by offering ground handling services to third party companies). They are just waiting for certification from Uganda Civil Aviation Authority. We are going to follow up that issue as a Committee. They should get that license as soon as possible because it will enhance their revenue as an agency of Government,” Karubanga said. The Committee is also happy that Uganda Airlines management has made strategic partnerships with other airlines and countries.

“We are happy that they have resolved the challenges in leadership…We are hopeful that this airline is going to develop since the number of passengers using Uganda Airlines has increased. It started with 65,000 and in the third year, it has over 270,000 passengers. That’s a very big growth in terms of passengers and trust in the national carrier,” Karubanga said.

Meanwhile, Karubanga added that the Committee members got a technical explanation on why a spare engine is important. The MPs are now convinced that Uganda Airlines needs the spare engine urgently.

“The rationale of having a spare engine is agreeable by the Committee. We support it fully because the cost of hiring one is quite high,” he said.

Ephraim Bagenda, the Director of Engineering and Maintenance at Uganda Airlines, told MPs that a standby spare engine is necessary because engines are changed after a period of time.

“When you operate up to 8,000 flight hours, then the engine has to be removed and sent for performance restoration; you can call it overhaul. When you remove one engine, you need to install another to continue with the operations or else get grounded. If we don’t have a spare, we have to lease an engine from abroad while we send ours to the workshop. The one which goes to the workshop will take a minimum of 90 days to be overhauled. If you hire one, you must spend daily until the overhauled one returns. Leasing an engine for 90 days will cost a minimum of US$650,000 (Shs2.52bn). If you have a spare, once you remove the engine which needs to be overhauled, you put your spare; you avoid leasing. A new spare engine costs US$6.5m (Shs25.2bn). That is with a discount of 15%,” Bagenda explained. He added that Uganda Airlines has a total inventory of spares worth US$12m (Shs46.5bn). The Committee also realized that the airline has a challenge of skilled manpower especially pilots.

“We are calling on Ugandans to undertake on those courses. If they can gain enough flight experience, the jobs are there,” Karubanga said.

Jenifer Bamuturaki, the Uganda Airlines Chief Executive Officer, said that there are mandatory numbers of pilots the airline must have for both the Airbus and for the CRJ.

. Bamuturaki says they don’t have adequate numbers for pilots. This is after the national carrier upgraded First Officers to Captains.

“So the manpower we need will be in the First Officers…We need about 10 of them,” she said, adding that without adequate numbers, there’s a likelihood of an aircraft being parked as the few pilots may travel for training or may go on leave.

“We have a few that have relocated; we didn’t only hire Ugandans but also international pilots. So, some of them have relocated back to their countries. We are now recruiting more pilots; the board has been supportive; they have approved for us to recruit pilots,” Bamuturaki said, adding that they have also recruited more people in reservations and ticketing office. She added that the airline is working hard to minimize flight delays and cancellations.