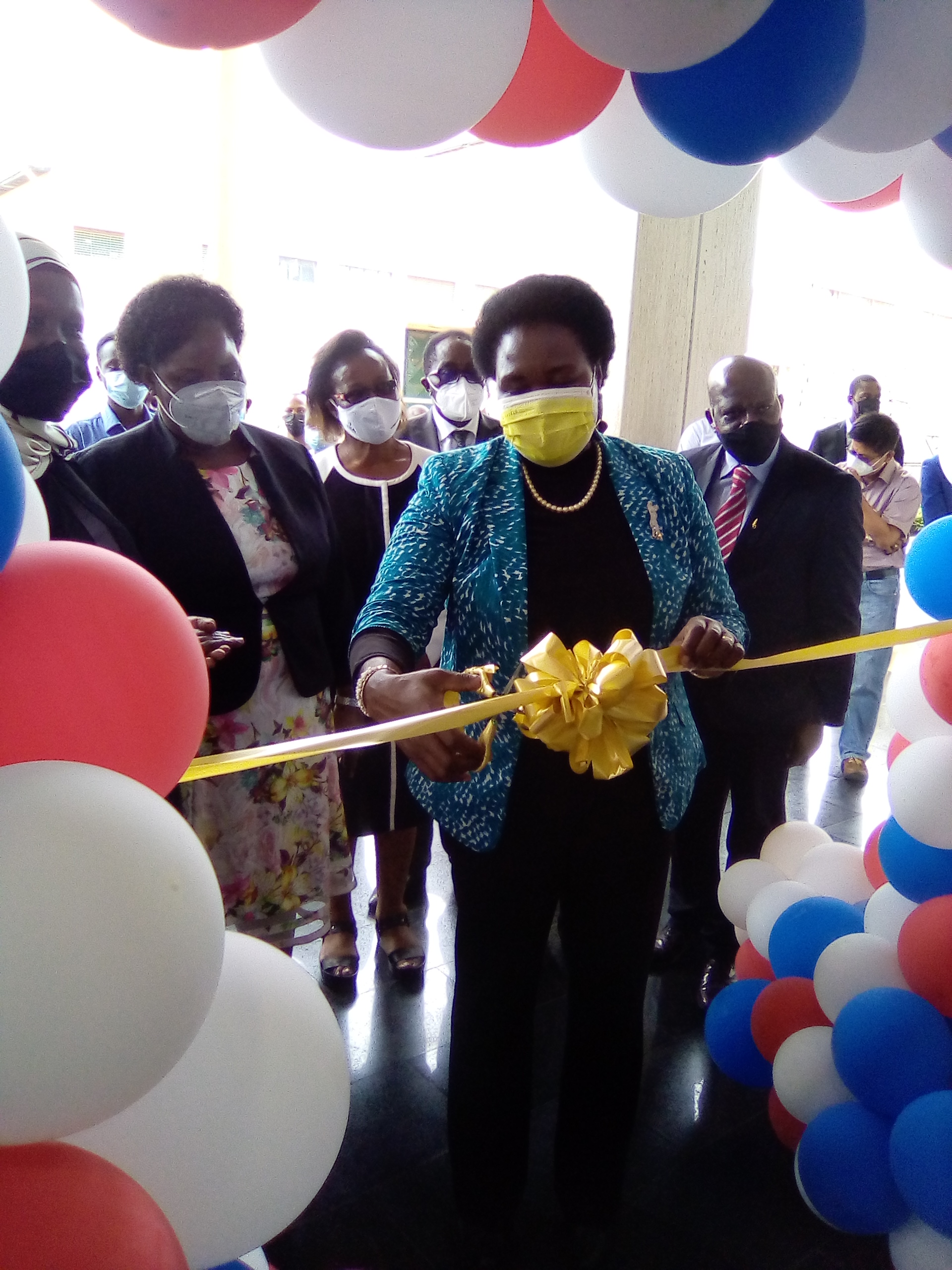 Nankabirwa cuts the tape as CEO Eng. Waako looks on

The minister for energy and mineral development Dr. Ruth Nankabirwa Ssentamu has challenged the Electricity Regulatory Authority (ERA) to work towards reducing power tariffs.
She said that now that new power stations are being brought on board, she expects ERA to bring down power tariffs especially after clearance of loans.

She said already government has financed Karuma and Isimba hydro power plants; a development that is going to boast the generation capacity.

Nankabirwa noted that Isimba was already commissioned in April 2019 while Karuma will be commissioned in June next year.
“People are demanding for power. You’re the regulator. I just want to hear the good news that tariffs are adjusted downwards. We are having new stations like Isimba and Karuma coming on board and we expect that as we clear the loans, we will be able to achieve a cheaper power” she said.

The minister made the remarks today while officiating at the official handover of new ERA offices at Lugogo in Kampala.
This ‘state of the art’ office block has six levels each fitted with sophiscated technology to enable proper management.
According to the contractor-ROKO Construction Ltd, this is a unique building and the first of its kind in the whole of Uganda.
The construction site according to ERA Chief Executive Officer Eng. Ziria Tibalwa Waako was handed over to contractor on June 18 2018 and was supposed to last 18months.

However, she explained; because of various challenges including Covid lockdowns, it took extra 22months to be completed.
“The project was designed to cost shs34.379,953,726. However, it has cost about shs26,764,813,161. This represents a cost saving of shs7.6bn” she said and attributed the cost saving to what she called prudent project management processes. She explained that when the decision was taken to construct these offices, it was decided from the onset that the whole process should be corrupt free.

“We said there should be zero tolerance to corrupt tendencies. There should be no tips, no kickbacks of whatever sort. We went ahead and put in place 3 layers of supervision. There was one at CEO level, contract management committee and the board oversight committee. So, we were able to supervise everything from the dot. I want to categorically state that, the supervision has been very efficient” she said.

Technically, the building according to Eng. Ziria Tibalwa Waako is fitted with a building management system (BMS) which monitors on all key systems including the lifts, access control, power usage and light management.
It also has an open void to allow natural air circulation, in addition to having two standby power systems including a UPS and solar power.

“This building has been built as a smart green building. Everything is monitored because it has sensors. We can now know the amount of water we have, temperature in rooms and who’s accessing the building among other things” she said. She said that because the building has been fitted with various facilities and technology, ERA is going to make a lot of savings on power and other facilities like wellness center, hiring conference rooms among others.

“On power alone, we have been spending shs5m per month but now, we have multiple power sources which are cheaper” she said, adding that the building had also catered for breast feeding mothers.A Eng. Ziria.

Meanwhile, the Authority board chairperson Dr. Sarah Wasagali Kanaabi commended members for exercising integrity. She said in the whole process, there was no money exchanging hands. She said the entity is now looking at increasing affordability, accessibility, reliability to power in the next five years.

She said power connections (customer base) had grown from 405,000 in 2010 to 1.6m by June 2020. She said now that power generation has increased, ERA is looking at having at least 300000 new connections annually. She commended government for always supporting ERA and the funds provided for this work.

Nankabirwa commended ERA for transparency in execution of his new task and conglatulated them for getting a new magnificent office block. She said government would continue supporting ERA and the power sector at large as per the NRM manifesto and the National Development Plan III.

She challenged the ministry for works to ensure that even other government agencies and ministries borrow a leaf from ERA and set up similar smart green buildings for efficiency.