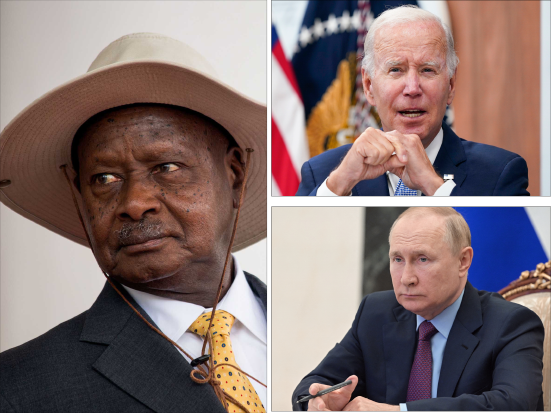 Russian foreign minister Lavrov was a few days ago here to meet Gen. YK Museveni Tibuhaburwa. The two principals discussed a number of issues of mutual cooperation citing Uganda’s historical ties with the Russians. His visit however, came at the time when Russia is facing negative publicity from mainly the western capitals led by the US over its Special Military Operation in Ukraine. Uganda in the special sitting of UN, was among the so many countries that took a neutral position in condemning or not Russia. This position has since put the country at a center of debate on where it’s leaders fall as far as the war in Ukraine and sanctions against Russia is concerned. Gen. Museveni has however, continued to play a neutral position on the conflict opting to pursue what he calls an independent non-aligned policy.
Meanwhile, the US has also sent it’s ambassador to the UN Linda Thomas Greenfield who met Gen. Museveni a few days after Lavrov visit. In that meeting, Museveni asked Greenfield to tell her government to exempt African nations from the sanctions against Russia. Russia on the other hand, offered among other freebies to help Uganda overcome the fuel shortage crises and also build it’s oil and gas sectors.
The US which has slapped sanctions against Russia oil doesn’t want Uganda to buy Russian oil which currently seem to be cheap and abundantly available. The president instead, opines that Uganda can overcome this oil crisis if we resort to electric cars which unfortunately, aren’t available in required quantities!
In his vist, Lavrov also visited Egypt, Congo and Ethiopia while Greenfield visited Ghana, Uganda among other states.
However, latest diplomatic onslaught by Russia and US on Africa is not the first of its kind. It dates back in the times of pre and post independence in what seemed to be Russia’s plan to build a strong Socialist movement in Africa.
For Uganda’s case, it even became worse for the US as Uganda’s it’s strong activists at the time led by Dan Nabudere even formed what they called Uganda Vietnam Solidarity Committee which sought to advance Vietnamese (socialist) agenda against the US and also condemn US operations in Vietnam. Nabudere at the time ran a bookshop in Mbale called Lumumba bookshop where several youth activists including now President Museveni would go for literatures. Nabudere also moved across the country teaching students on the values of socialism.

In the 1960s when most African states gained independence, the rivalry between USSR (Moscow) and the West heightened. Moscow represented socialism while the west represented capitalism. At the time, the Socialists were so entrenched mainly in what became to be baptized as the Socialist Nile Valley (SNV) bringing together countries around River Nile.
The SNV included Tanzania under Julius Nyerere, Uganda under Milton Obote, Sudan under Nimeri and Egypt under Abdel Nasser. On the other hand, there were efforts to pull Congo into this club under Patrice Lumumba which resulted into his brutal ouster and eventual assassination.
“At the time, Lumumba was trying to position Congo towards the Nile Socialist Valley which angered the West. This is why he was ousted and replaced by Mobutu who was pro-US. He was brutally removed from office and eliminated” says a 70-year-old Inspector.
In the neighbouring Kenya was Thomas Odhiambo Mboya who was a trade unionist, statesman, educationist and above all, was said to be a socialist too. He too on 5th/7/1969 was assassinated.
And because Nyerere was seen as the leader of the NSV, reports suggested there had been efforts by the west to sponsor Oscar Kambona (Secretary General of CCM) to topple him in the leadership of TANU (read CCM) so as to undermine the socialist movement in Africa.
At that time, Nyerere was said to be the chairman of the Frontline states and deputized by Zambian President Kenneth Kaunda.
In fact, it’s claimed Nyerere had gone a step further and wanted a highway connecting the NSV countries in order to strengthen the Socialist movement in Africa.
This means this commercial highway would run from Tanzania up to Egypt in an attempt to achieve what he perceived as African economic power and unity similar to that of the European Union.
Unfortunately, as all this went on, the west was also looking at possibilities of stopping this alliance with Russia among African nations.

In Uganda for example, Milton Obote was ousted in a coup d’etat by Amin as he went to attend a meeting in Singapore. The coup was largely seen as having been planned and supported by the west. This is why in that meeting, the UK premier sacarsitically said ‘some of you (read Obote) are here boasting unknowing you will not be presidents after this meeting’
With Obote gone, Nimeri also went through a coup and so was Nasser leaving NSV in the cold.

Knowledgeable individuals suggest Museveni too was a beneficiary of the Socialists having been in touch with Prof. Dan Nabudere who was a staunch Socialist. Museveni and Magode Ikuya (now minister) were regular in this bookshop with Ikuya being it’s shopkeeper.
Therefore, it’s said even as he (Gen. Museveni) fought his bush war, he allied heavily on socialist nations such as Libya for arms, Cuba among others until he won the war. When he captured power in 1986, he had started a system of barter trade since the economy had been in ruins. Uganda for example partnered with Cuba and exchanged timber for sugar.
Faced with pressure from the west, Museveni tried to change by accepting liberalization where he had to make reforms including government removing itself from doing business and also having a lean government. Although he has maintained liberalization, the size of government has since expanded effectively undoing some of the conditions by the west.
“Russia’s decision to send Lavrov is inherent in the historical tentakles of Gen. Museveni and how that sense of (Uganda) self determination has lingered on notwithstanding the competing interests of the West and Russia” says an Inspector.

In 1925, E.J Wayland who was a colonial government Geologist published an article entitled “Petroleum in Uganda” but referenced as hydrocarbon.

10 years later in 1935 following the virtually public announcement, the colonialists had a first drill in Buliisa on Lake Albert.

However, the rude interference with this programme was occasioned by the emergence in 1945 (2nd world war). This is when the colonialists went back to the drawing board and morphed a geo-strategic review in terms of governance of the territories.

This new realignment and strategy was focussed on West Africa and Nigeria in paricular because of its coastline geographical location and therefore cost effective transportation.
In short, the colonial geo-strategic decision made mainly focused on oil prospecting in West Africa while East Africa was predominantly left for agricultural farming and other less intensive mineral extraction like Cooper in Kilembe.

However, the fundamental change came about 1980s when the NRM government resumed opening up the oil fields.

This resulted into an international scramble for Uganda’s oil resources through a number of companies that represent their (foreign) countries.

In uganda, we have had a number of companies to manage our oil and gas and among them include these actors; Tullow (UK) Total (France) Cnooc (China) and The RT global (Russia).

Therefore, the recent visit of Russian foreign minister to Uganda vis~a~vis the visit by Linda Thomas Greenfield should and ought to be put in context especially in regards to the sanctions against Russia.

The gas, Uganda has established in good quantities might be of great significance to the West because of the sanctions they imposed on Russia which is the world’s biggest supplier of natural gas.
Arguably in the circumstances, Russia’s Lavrov diplomatic onslaught would seem a quest to block this so that they (Russians) have the monopoly of controlling gas in the world leaving the West with no option.
“Lavrov visit does not only seek markets and supplies for products here in Africa but makes the wider geo-strategic consideration of counter balancing the strategic influence and mission of global hegemony” says an Inspector.

On the other hand, its also an undeniable fact that Russia never participated in the human tragedy of slave trade in Africa, but instead pursued a policy of standing in solidarity with the oppressed wherever they were on the African continent and far beyond. This partly explains why most African countries haven’t warmed up to the West’s sanctions against Russia. Uganda however, continues to pursue an independent non-aligned policy trying to balance between the West and Russia !