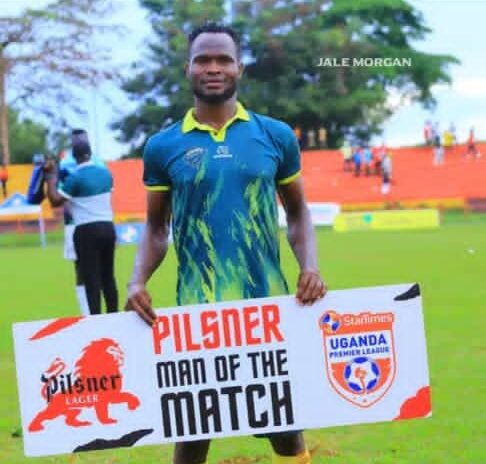 In a thrilling encounter at Kakindu Stadium in Jinja on Sunday, the lethal front man gave his home fans early joy when he struck the Uganda premier league’s quickest goal in the first minute of the game following a moment of sloppy defending from retired Cranes International Murshid Juuko.

Kitata latched onto a poorly controlled ball from Juuko to start off a quick interplay with familiar co-protagonist Brian Kalumba. Kalumba then set him up Kitata who fired a tricky swerving shot which left the Vipers goalkeeper transfixed as the ball hit the right top corner of the net.

Kalumba’s assist was the second in a row following one he provided to Kitata against KCCA in the Soldier Boys’ 2-1 loss to the Kasasiro Boys.

Kalumba, a former partner to Kitata at UPDF, joins Godfrey Lwesibawa (who missed the game due to suspension) among those that have contributed to the top striker’s tally of 6 goals in 4 games so far.

Vipers’ loss was only the second in the league this season, following an earlier defeat by UPL giants KCCA.

Kitata’s goal will also help to cement his reputation as a one who rises to the big occasions having scored a clever goal against KCCA last week. Sunday was also the second time in less than a month that Kitata was named the Pilsner Man of the Match, following similar plaudits on November 9, 2022 after his hat trick against Bright Stars FC. With the CHAN tournament around the corner, Gaddafi will hope that their striker remains injury-free so as to be in contention for his maiden Cranes call. 5 goals in the month of November as well as two Man of the Match selections in under a month could also put Kitata in good stead to win the USPA Player of the month prize.

Meanwhile, the hitherto free-scoring venoms could have left Kakindu with at least a point but Gaddafi custodian Joel Mutakubwa proved too much for the guests, thwarting clear-cut goal chances from Karim Watambala, Hillary Mukundane and Najib Yiga in the 14th, 45th and 75th minutes respectively.

Vipers now sit third in the UPL log with 20 points while Gaddafi jumped to 7th position on 15 points.

Gaddafi’s next game will be a trip to Luzira Prisons where they will face Maroons. The soldier boys will be buoyed by the return to the dugout of head coach Wasswa Bbosa who ended his 2-match FUFA ban together with wide forward Godfrey Lwesibawa.

While Maroons has proved to be a boggy side this season, all eyes will be on Gaddafi’s lethal marksman Kitata who set a target of double figure goals this season.

HOW THE TEAMS LINED UP