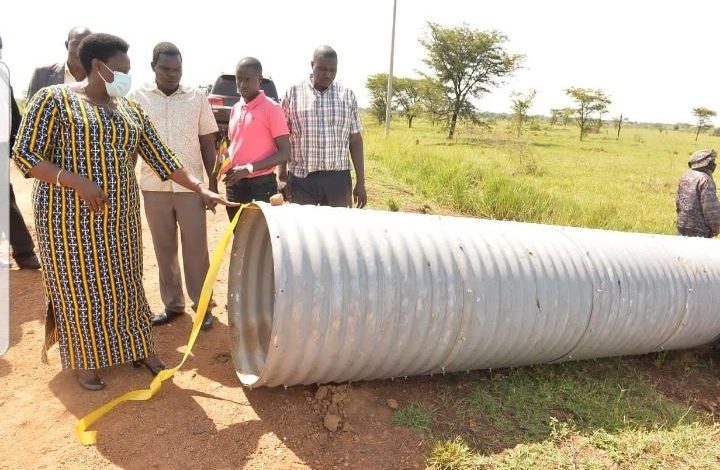 It was joy and wild cheers as leaders from Katakwi district converged to witness the launch of the construction of Usuk-Ongongoja Road.

The 28km road is among the several others that have been giving leaders sleepless nights every time it rains.

According to Vice President Maj. Jessica Alupo who’s also the Katakwi district woman MP, movement on this road has always been a nightmare everytime it rains as it cuts off people. She says such situations even affect the education programs in the area as pupils are cut off and cannot access schools.

“Everytime it rains, things become hard for the people using this road. It becomes impassable and cuts off people especially children who want to go to school. There are many other similar roads that need to be handled so that we ease movement of our people, their goods and services” she said at Ongongoja SS where she commissioned a classroom block.

She directed the district engineer Andrew Echatu to traverse the district and identity the most damaged roads so that they can also be fixed. She said that once this road is done, it won’t only ease transport but also boast trade with neighbors.

Meanwhile, Joseph Echuman, the LCV vice chairperson-Katakwi, reinforced Alupo’s comments saying the road will certainly open up trade opportunities between the neighboring Kotido district and Katakwi once the works are done.

Echatu said that business and movement of people had come to a standstill after this road was washed away by rains, but now a ray of hope is in sight. Shs50m is expected to be spent on this road.