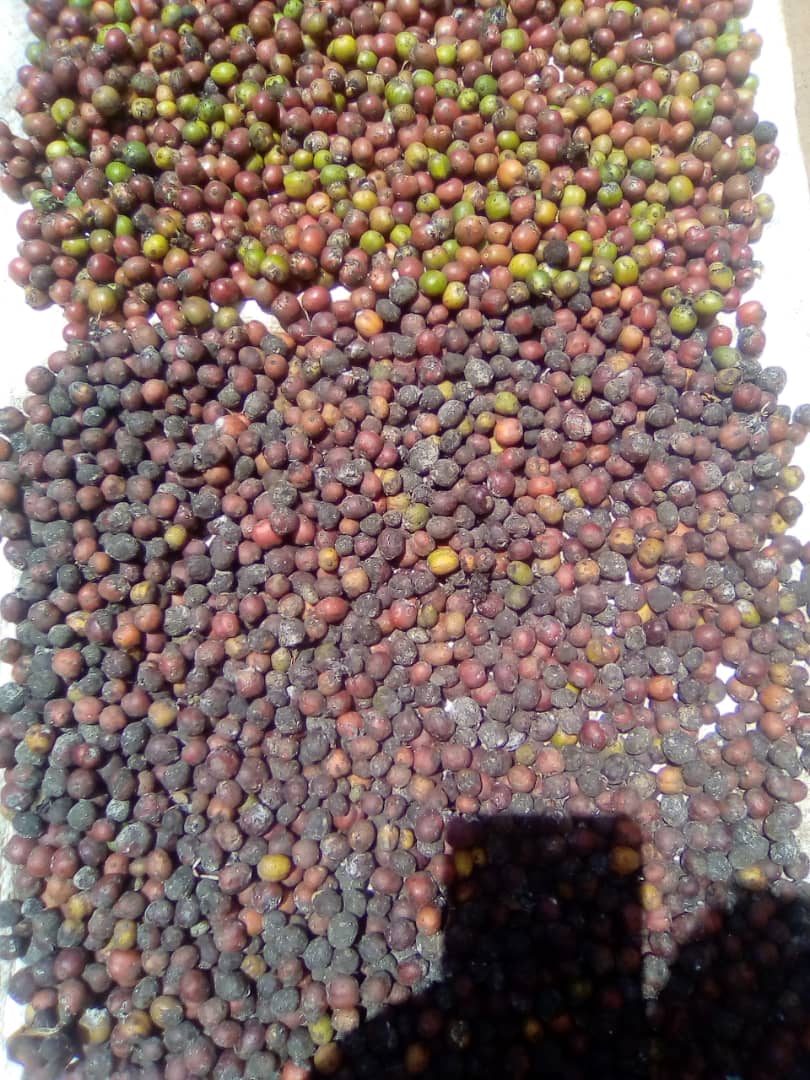 The battle to control Uganda’s lucrative coffee sector has not just started, this News site reports!

It has emerged that actually, the same sector caused a sharp disagreement between former president Milton Obote and his powerful Army Chief of Staff Maj. Gen. Oyite Ojok.
In fact, it is claimed that because of this rivalry, the two Lango men nearly traded brawls at State House-Entebbe especially after the president threatened to knife the army boss from being the chairman of the lucrative (now defunct) Coffee Marketing Board (CMB).

“Oyite was the CoS and chairman CMB. He became so rich and started not listening to his master. Obote called him to state house and told him that ‘do you know that I can sack you from CMB? Oyite said ‘Do you know you’re seated there (office) because of me? You sack me, and see” says an inspector.

Our Inspector went went on ‘so, from that time, the ground for elimination of Oyite was ripe. He had become a headache and untouchable. Obote felt threatened by Oyite’s wealth’
We’re told when Oyite amassed all that money, he would sheepishly keep it Swiss banks. Unfortunately, when he died in a plane crash, not even his next of kin knew a thing or two about the pincode to his banks, hence the loss of that money to date.
“As a country we lost a lot of money. And this is why I support Gen. Museveni when he says lifestyle audit by IGG needs to be given a second thought. Those who steal our money and take it outside are enriching those foreigners. Let them steal and invest here at least. Uganda lost huge sums of (Coffee) money those days” says an inspector.
It was stated that when Obote planned to return to Uganda, Paulo Muwanga and Oyite gave him secret conditions on how to share power.
It was agreed that Obote becomes president and minister for finance, Muwanga vice president and minister for defense while Oyite was to be the CoS and chairman Coffee Marketing Board.
“This is how they looted the country. Coffee was a lucrative business at the time right from independence and that’s why everyone was fighting to control it” says an Inspector, adding that whereas in other countries like Nigeria they have the ‘Oil curse’, in Uganda, coffee is next to oil.
Obote it is said at first feared more Paulo Muwanga and appointed Peter Otai as a state minister for defense. His real work was to spy on Muwanga through Otai as he (Obote) plotted on how to deal with Oyite.
“When Oyite died in a crash, Obote appointed his puppet man Opone Acak to replace him” says an Inspector.

Actually, the desire by government to control this sector has not just started but it has run from the time Uganda asked for independence.

It so happened that when pressure mounted on the British to grant Uganda self rule, they put the agitators in an awkward situation telling them that the only condition for that to happen was for them to prove that the ‘country’ was capable of meeting almost a half of its recurrent budget to run.
The British according to Inspectors dictated a figure of €1m and didn’t expect the agitators to raise such huge amount of money.

The dictated figure amounted to 40% of the total budget that was badly required as partial contribution by Uganda towards it’s recurrent budget in case independence was granted.
Unknown to the British, Buganda and Bugisu had amassed huge sums of money reaping it from the massive coffee sector that was flourishing at the time in both regions.

With no delay, Buganda which badly agitated for self rule through activists like Ignatius Musaazi raised half a million (€500000) pounds. Added to this was €300000 which was collected from Bugisu to make it €800000.
This mobilization of resources by Buganda and Bugisu which up to now are the leading producers of coffee reportedly shocked the British and thus had no more ways of delaying the handover of the country to it’s owners.
“The British gave a condition that you’re not just asking for independence, but you must prove you have the money. Therefore, as you can see, Uganda got independence on the account of Buganda and Bugisu. They raised the 40% budget requirement. This shows, coffee can make or break a government” says an Inspector.
According to details here, the current shocks in as far as control of Uganda’s coffee sector could be related to the fear that now that many people have embraced coffee growing, this sector needs to be monitored well.
This is the reason it is being proposed that coffee growing needs to be licensed.

But according to premier Robinah Nabbanja, whereas Uganda exports large amounts of coffee, much of this goes unprocessed hence fetching little revenue. The idea to bring in an investor is to help add value to our coffee.
“We sell a kilo of coffee at just $1 yet on the market, a kilo goes for $14. We’re saying, why don’t we add value to our coffee and we start getting those $14?” She told a women conference at Lubiri-Mmengo although she was booed. The PM also faced the same situation at parliament after members finally ditched the coffee deal.

Already, information suggests that Bugisu Cooperative Union (BCU) which is the second largest exporter of coffee in the country at one time was suspected of being involved in alleged subversion. This was the time FDC’s Nathan Nandala Mafabi had just been elected to the whelm of that entity.
Those knowledgeable on Uganda’s politics will remember that Mafabi suffered setbacks at the beginning of his entry into BCU with his leadership being quashed until government did the necessary investigation and gave conditions for his Leadership to flourish to date. Behind all this was an alleged secret Intelligence investigation.

This alleged threat was around 2011 and was partly the main reason former powerful and trusted PPS Amelia Ann Sserwaano Kyambadde was named minister for trade, industry and cooperatives.

Apparently, intelligence surfaced suggesting that foreign backers to FDC’s Kizza Besigye had plotted to use the accounts of BCU to channel his money for mobilization for Walk to Work.
The deal according to Inspectors had allegedly been designed in a way that when BCU exported coffee worth (for example Shs2bn), the funders would double the payment to read 4bn but part of it was to be channeled to FDC coffers. Naturally, a government with a lazy intelligence apparatus wouldn’t detect such an arrangement in case it was to be true!
It should be remembered that at that time, W2W had become active and caused mayhem in Kampala and since Mafabi was a top official in FDC and a close ally to Besigye, his rise to the whelm of BCU was received with suspicion.
Inspectors suggested that this is the reason Mafabi at first suffered setbacks and this allegedly forced Amelia to carry out due deligence on him, motive and his administration before he could comfortably sit in his chair to date!

Therefore, Inspectors said that even as parliament managed to block the Pinetti coffee deal, the idea to monitor this sector closely hasn’t fully died out.

This sector according to knowledgeable Inspectors had continued to perform well at the beginning of his leadership until he chased Asians in 1972.
“When he expelled Asians, there was an international campaign against Uganda just like you see Russia now. Coffee became useless and CMB became dysfunctional. They couldn’t sell it outside. But trust Ugandans, they started smuggling it to Kenya and Tanzania” says an Inspector.
With this situation, cooperatives died out as they couldn’t buy coffee from farmers, and neither could they sell it.
“They couldn’t pay farmers because they didn’t have money from outside (exports). So, the farmers said, we’re going to sell our coffee our style. They resorted to magendo. Bugisu District was near Kenya and people started carrying coffee on their heads to smuggle it. Those from Buganda used Lake Victoria to smuggle coffee. They did well through coffee” says an Inspector.
Currently, Mmengo has been and continues to run a campaign called Mwaanyi Telimba (Coffee is the deal). Through this campaign, many people have joined coffee business with even those with a small size piece of land heeding to Katikkiro’s advice.
“The real bonna bagaggawale (prosperity for all) is coffee, a crop which is planted and lasts for over 5decades. That’s why Katikkiro is doing this campaign I think. Even in Bugisu, BCU is buying seedlings and giving to people to plant. Coffee doesn’t require massive land to benefit” says an Inspector.
The ministry of finance is currently under fire for signing a ‘dreadful’ coffee deal with an Italian investor Enrica Pinetti. Under it, the investor has freebies like free land, capital and tax holidays. The deal says the investor will be in charge of all Uganda’s coffee controlling from East, West, North, South and Central. Ugandans have since protested the deal resulting into parliament’s action a few days ago also dust binning it. Watch the space!