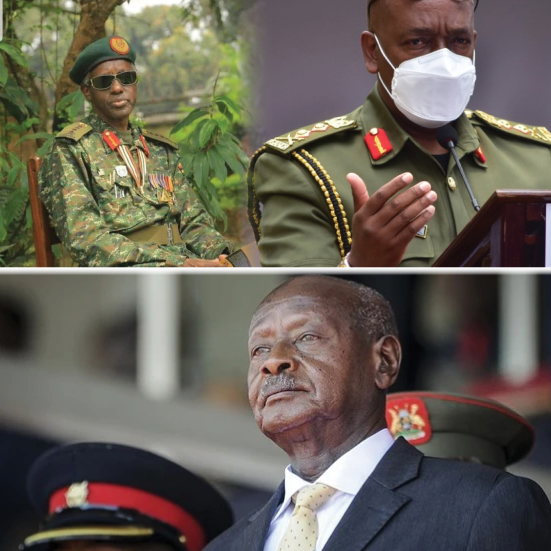 Gen. Elly Tumwiine (RIP) and Maj. Gen. Leopold Kyanda are said to have ‘hotly exchanged views’ in one of the High Command Meetings chaired by CiC Gen. Yoweri Museveni Tibuhaburwa at State House, this News site reports.
The two generals we’re told, held a ‘friendly’ fire over a proposal to have a universal award of medals to serving UPDF officers and men.

The proposal according to our Inspectors was engineered by Kyanda who at the time was the CoS-Land Forces while Tumwiine was until his death; the head of the Medals’ Awards Committee under office of the president.
Kyanda we are told sat in his office and came up with a proposal to have all serving officers and men of the UPDF given medals as a sign of recognition of their dedicated work to the nation.

It so happened that within the forces, there had been alleged grumbling by most especially the lower cadres that the medals were exclusively being taken as a preserve for the top ranked officers and yet the lower cadres were also doing a lot to maintain peace and stability of the country.

In his position as Chief of Staff, Brigadier (then) Kyanda carried out a secret research before he devised means of how to restore morale among the forces.
“Some of the soldiers retire at lower ranks but that doesn’t mean they have not contributed to this nation. They therefore, have no chance of ever getting a medal. How about those we take for combat operations and some are put out of action? How do their families get to know that they had a hero in the family?” explained an inspector.

Our Inspectors suggested that Brigadier Kyanda upon diagnosing the issue, chose to push the High Command agree to his medicine that apppeared in form of giving medals to all soldiers regardless of their ranks so long as one was a serving soldier.
He however, first briefed his boss the CiC Gen. Yoweri Museveni about the proposal and why he was mooting it. Museveni according to Inspectors, was all smiles with the Kyanda proposal and henceforth, summoned the High Command to get it’s final position.

“A soldier feels happy getting such a prize. It shows he has worked diligently for this nation and this will keep his morale up to continue executing his duties and working for more medals. This is why they all became happy thinking the Kyanda proposal was going to sail through” says an Inspector.

Gen. Kyanda who stormed the meeting armed with his beautiful paperwork, was asked to take the floor and present the idea to the top ranked officers.
“This whole idea is only meant to appreciate our soldiers. It is a proposal where we want all soldiers given medals as a sign of recognition for their dedicated work. This will make them happy and have something to show back in their societies and homes that they were truly brave and men of high integrity to this country” Kyanda was quoted as marketing the idea in the meeting.
However, according to Inspectors, even before he could finish presenting, Gen. Tumwiine took to his feet and roared.

Without discussing the merits and or demerits of the proposal, Gen. Tumwiine reportedly wondered where Brig. Kyanda got powers to assume his role.
“I am the chairman of the Medals’Awards Committee. Why didn’t you bring that matter to me first? We have a strict procedure we follow to award medals. I am not taking any of that suggestion” Gen. Tumwiine is quoted as having told the meeting and that’s how the deal aborted.

We’re told his subsequent loss of MP seat representing the army didn’t come as a surprise but was partly due to this matter.
We are told the news of details of the meeting in the High Command somehow leaked to most especially junior officers.

And because officers from the rank of Major sit in the Army Council (call it army parliament which elects UPDF MPs), this is how they waited for an opportunity to sort Gen. Tumwiine by way of denying him votes. Most of these middle ranked officers haven’t yet benefitted from the Tumwiine medal deal.
Tumwiine who had been the Army MPs’ whip for decades was finally dealt a big blow as the ‘riotous’ army council representatives sent him packing from representing the army using the vote.

Usually, all former army commanders including him have been army representatives but Tumwiine was the first commander to be denied the chance again in what seemed to be a self destruction mode he allegedly set.

Tumwiine, a bush war general was the first to shoot the first bullet that ushered in the NRA/M regime after five years of guerrilla fighting.
He is said to have been powerful in his own territory that even when the Chief of Logistics and Engineering came up with any new army attires/uniform, Tumwiine was always considered among the first three people to wear that new uniform on the block.

“If anyone delayed to deliver his uniform, he would ask if he’s (CLE) the one who removed him from the army. He loved his uniform so much that no CLE made a mistake of bringing a new uniform and didn’t first send Gen. Tumwiine his” says an Inspector.

Besides the uniform, Tumwiine loved his military rank. In fact, we’re told of an incident where one of the reporters at parliament in the state-owned New Vision paper ran a story and mistook Tumwiine’s rank for that of a ‘Major’.
“Tumwiine stormed parliament hunting for the scribe. He wanted to know when and where his rank (General) was removed from him and by who? The scribe (names withheld) ran away and New Vision had to make a correction the following day” says an Inspector explaining how the fallen general loved his rank.

Prior to his death, Tumwiine had allegedly formed a secret group called “The Grey Haired Club” which used to sit at his Nommo gallery business center in Nakasero. The group brought together all those with grey hair across the country and those aspiring to have them. We are told it was part of his mobilization tool to have youth work hard and also live a positive life so that they don’t die early.
He is remembered to have told Gen. Museveni to prepare to handover power; statement that is not common among other generals or NRM officials to say it boldly to the CiC.

To the opposition, he’s loathed as a man who never sympathized with those that had been killed by security forces on November 18-20 2020. He said the police had a right to shoot (kill) protestors, a statement that was taken as being ruthless and insensitive to people’s lives.

“People need to put his statement into context. He didn’t say police should kill, but he was warning youths not to engage in protests because they could lose their lives. He wanted them to weigh their actions and their likely outcome” says Peter Magomu Mashate, NRM Diaspora league general secretary when asked about this statement.