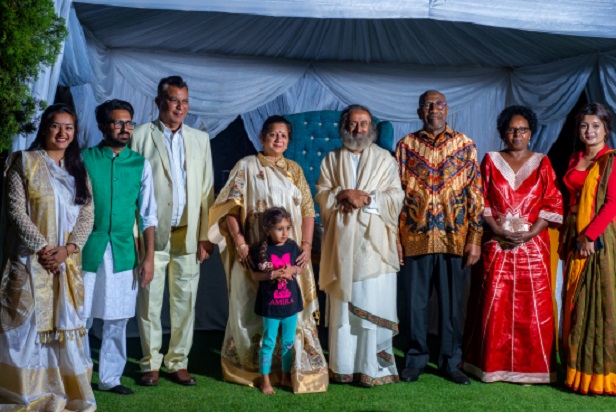 While on the Ugandan leg of his African tour in Kampala last Wednesday, Gurudev expressed interest to invest in Uganda’s budding IT sector through deliberate bilateral efforts.

Speaking to his followers in the presence of former Prime Minister Dr. Ruhakana Rugunda, Gurudev asked the government to avail him with land which he can use to realize his big dream for Uganda.

“I am so happy that you have IT people, but we can bring in experts from India to train these young people for between three to six months as you know India is the hub of the knowledge industry; even if you go to Europe, America, most of the IT companies are headed by Indians. Twenty-nine percent of Indians are in IT industries and 33 percent of scientists are from India,” the spiritual leader said.

“So, we have people who can come here and train our young people for about six months. We need a place here to operate from. We request for a place for us, then 50 to 200 youths can come and train the ones here and who will in turn, employ themselves,” he added.

Further in his remarks, the India-based religious leader, whose vision is “a stress free” and “a violence-free world”, promised to send IT experts from India to Uganda to train youths in ICT so that the skills enable them get self-employed.

Gurudev revaled that his vision to invest in Uganda is premised on his ideology of creating a violence-free and stress-free world for all humanity, since we are all children of one God.

“The whole world is one family. We might have different food, and languages, but we all have a deep connection with one spirit, one God. This is what I believe in. I have been travelling all the time and when asked where I am going, I tell them that I am just travelling from one of my rooms to another,” Shankar said.

He thus appealed to all Ugandans to remain united and peaceful with one another regardless of our individual differences in the languages, food, and religion among others.

“Conflict between religions should never be encouraged. See, there is only one Jesus Christ, but do you know how many sects of Christianity they are? 72! There was only one Prophet Muhammed, but there are 135 sects of Islam. There are also 32 types of Buddhism and with Hinduism, you can’t count all of them. So the philosophies are the same but ignorant people have created so many divisions,” he bemoaned.

Gurudev whose tour of Africa has seen him go to Ghana, Nigeria, then to Uganda and Tanzania, was hosted by the Tirupati Family headed by patriarch Miraj Barot; who applauded the spiritual leader for accepting to come to Uganda.

Speaking at the function, Dr. Ruhakana Rugunda, now a special envoy for special duties in the Office of the President, thanked Gurudev for coming to Uganda, urging him to use his influence to woo Indian investors to Uganda.

“The relationship between Uganda and our friends in India is historical, significant, and has had a huge impact in our country in the area of business that has demonstrated that you come and invest in Uganda and you make a lot of money,” Rugunda said. “I request his holiness to use his position to mobilise Indians to come and invest in our country.”

He is a multi-faceted social activist whose initiatives include conflict resolution, disaster and trauma relief, poverty alleviation, empowerment of women, prison rehabilitation, education for all and campaigns against female feticide and child labour.

He is engaged in peace negotiations and counselling in conflict zones around the world. His expertise in bringing opposing parties to the negotiating table in areas such as Sri Lanka, Iraq, Colombia, Venezuela, the Ivory Coast, Cameroon, Kashmir and Bihar is widely acknowledged.

In 1981, Gurudev established the Art of Living, an educational and humanitarian non-government organisation that works in special consultative status with the Economic and Social Council of the United Nations present in 156 countries, it formulates and implements lasting solutions to conflicts and issues faced by individuals, companies and nations.

He has reached out to an estimated 450 million people world over through personal interactions, public events, teaching, art of living workshops and humanitarian initiatives.