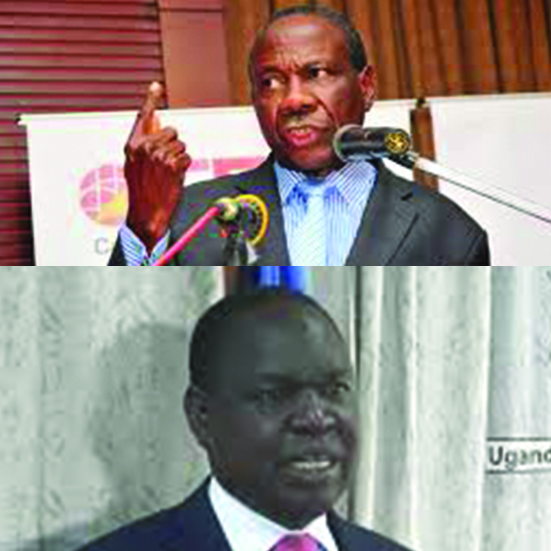 Former State Minister for Finance Fred Jachan Omach Mandir is soon landing into things, his News site reveals!
Omach we’re told is being lined up to replace finance minister Matia Kasaija a.k.a Mr. Enkonome!
Our Inspectors suggested that not only Gen. Museveni wants to make changes in finance political leadership, but also at technical level. In the proposed plan, the position of Permanent Secretary and that of Commissioner General-Uganda Revenue Authority (URA) are allegedly under close watch.

Apparently, the situation facing the economy is what is driving the General from Rwakitura to consider making some changes in the key sector.
The economy is said to be doing badly to the extent that salaries for Local Government staff for this month of December are not there. Various CAOs including that of Wakiso, have already communicated this situation asking staff to sparingly use the little coins they have to eat Christmas as there budgetary constraints.

We’re told even many staff in office of the president are demanding some months.
We’re told not only the finance ministry is allegedly doing badly, inspectors revealed that infighting among the technical top brass is bogging the sector down.
“At first, there was a gang that teamed up to have the likes of Mugambe quit. They hoped to work together when he eventually goes. Mugambe left and now, the real bulls are not on talking terms. They are fighting to outsmart each other to cause each other’s downfall” says an Inspector.

The situation is allegedly terrible that Uganda has even defaulted on its continental obligations like paying for African Union subscription. As such, no Ugandan official can step into AU meetings and our flag at AU headquarters has allegedly been removed.
“With this kind of situation, we’re either collecting enough taxes or something isn’t right somewhere that the CiC is considering action in finance” says an Inspector.
In URA for example, we’re told former Commissioner General Allen Kagina used to go an extra mile to secretly borrow internally in order to keep the ‘Enkonome’ running as she continued to collect taxes in the year.

“Most people don’t know how this lady managed to keep the economy running. Kagina would reach out to tycoons in the land who would secretly lend government money internally. This loan would be used to cover the revenue gap so that government programs would continue” explained an inspector, adding that Kagina would later pay back the tycoons after subsequent tax collections in the year.

“The way we’re seeing things, it seems we entirely rely on revenue collections. When the revenues aren’t enough to run the economy, everything stalls. This is what you’re seeing that people can’t even get salaries. Some remedial measures are really required to keep the economy afloat” says an Inspector referring to Kagina’s inhouse innovations.

Born on April 16 1953 in Arua, Omach whom some pals refer to as Mr. Investor is happily married with 6 kids.
He’s a renown farmer in his home village in Jonam doing some fish farming and pawpaw growing. He however, made some losses at the beginning of the fish business as birds reportedly feasted on all fingerlings as he hadn’t covered the ponds.

“Omach cried after finding nothing in the ponds. He only found toads and a few catfish after investing 20m in the fish business” an inspector told us.
Like Hon. Kasaija, Omach really went to school. In 1977, he was at Makerere where he got a BA (Hon) Economics &Social Administration. He did his O and A levels at St. Alloysious College Nyapea and Lango College respectively.

He has also undertaken various courses in Treasury Management, Business Continuity Management, Board Management Risk and Compliance, Corporate Governance, Banking and Financing among others.
Currently, Omach is the Chairman Board of Directors at UNRA under Allen Kagina, a position he has held since 2017 to date. His board offers oversight to the management of UNRA.

Omach is also the Chancellor ISBAT University from 2016 to date, Board Chairman Uganda Debt Network since 2019 to date, worked as state minister for finance for 10years which made him the defacto 2iC of the ministry.
The smiling, dark-skinned man from West Nile also worked as a member of the Parliamentary Commission from 2009-2016, Cordinator of the inaugural USA/Africa Summit in 2014, Acted at Governor Islamic Development Bank-Indonesia in 2016, led various government delegations for international meetings, Pioneer member of the Pan African Parliament 2003-6 among others.

When it comes to cadreship, Omach is unmatched. For example, the inaugural NRM delegates conference at Namboole in 2005, Omach was the vice chairperson of the organizing committee. In 2011 and 2016, he was a member of the NRM manifesto drafting committee, Cordinator West Nile NRM parliamentary group 2003-6, Chairperson West Nile parliamentary group in 8th parliament, Director Northern Uganda Social Action Fund.

Omach fears God also. He for example, hosted Gospel Operation Africa 2013, he’s also the chairman Board of Directors Pride Microfinance from 2016 to date, among others. He has worked in various banks including Centenary Bank, UCB, among others.
To prove his track record, Omach according to the CV we chanced on being vetted has three prominent men as his referees. These include Gen. Edward Katumba Wamala, Maj. Gen. Severino Kahinda Otafiire and former finance minister/Makerere University chancellor Dr. Ezra Suruma.

Museveni seems to have a special attribute among the people of Nebbi area. We’re told this is because, they help him balance the North and Midwestern or Western for that matter. Nebbi region are basically Jonams and Alurs. These border Bunyoro sub-region. Omach’s impending job adds to a recent appointment Museveni made in the Army where he appointed another Nebbi region Maj. Gen. Dick Olum to be the new commander of Operation Shuja in DRC. Initially, the operation was being led by now Lt. Gen. Muhanga Kayanja who has since take over as CLF after CiC fired Gen. Muhoozi Kainerugaba.

Olum is not a new thing in such operations. Regarded as a down to earth General, Olum was at one time rumored to be one of the people Museveni was looking at for possible succession. He’s said to be closely known to the first family just like Nebbi woman MP Catherine Mavenjina.
The impending appointment of Omach is also premised on the fact that Gen. Moses Ali may be serving his last time as minister given his alleged advanced age. Museveni therefore, wants to keep the West Nile boat still balancing well in case Ali is to be retired.

Kasokoso Ghetto Youths Praise ONC’s Hajat Uzeiye For Reaching Out To Them, Endorse Gen. Museveni For 2026