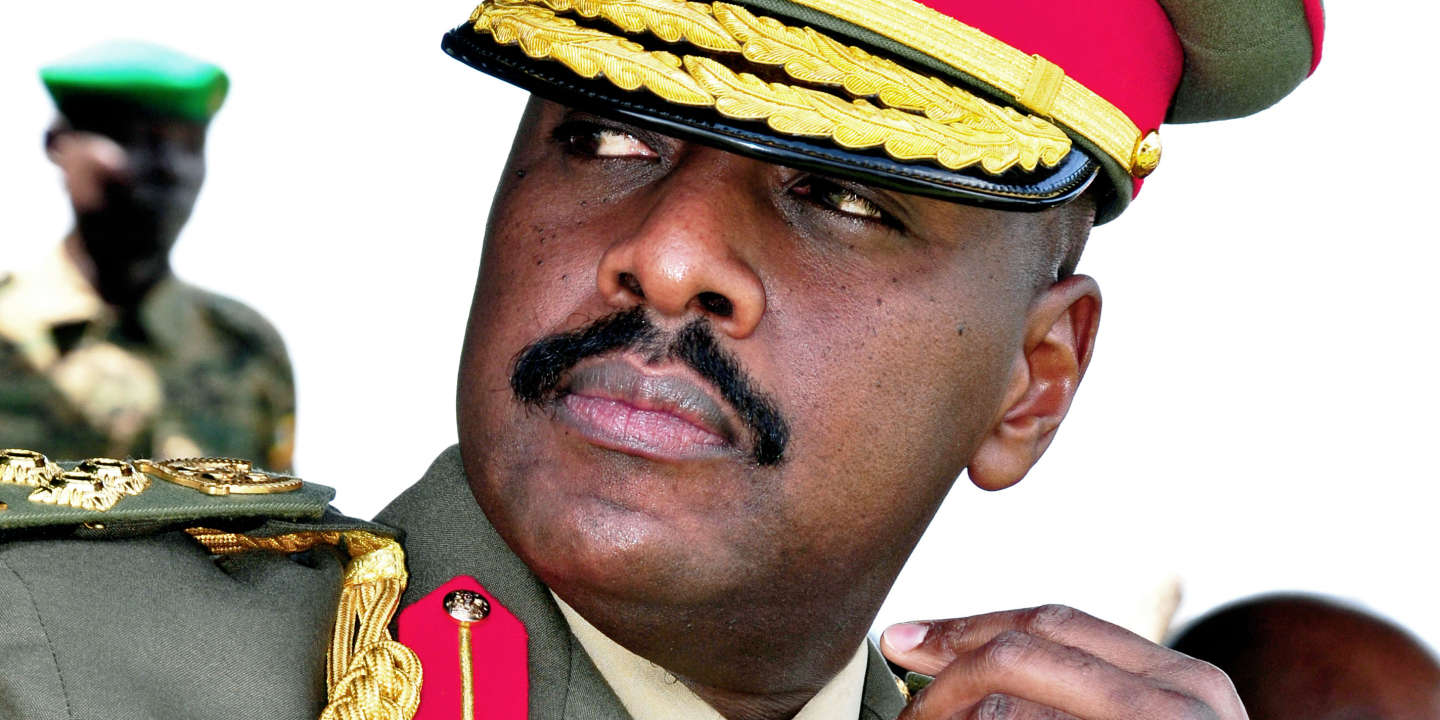 The Commander Land Forces Gen. Muhoozi Kainerugaba a.k.a MK will have to use two options to smoothly succeed his dad as president and NRM chairman; The Inspector exclusively reports!

This will however, according to inspectors depend on whether his dad is willing to let go of the sweet chair and hand it over to his son who’s now in full gear to attain that coveted seat in the land.
“In the 1980s, the was a man called Col. Omaria from Teso. There was also Eteker Ejalu and Peter Otai. They were all big, but Omaria was feared. Where he sits (sat), no other person can (could). You sit at a distance as if COVID-19 was there. That was the competition in Teso at the time. Even now in NRM, where Gen. Museveni sits, you can’t talk of anyone” an inspector explained the situation in NRM and why MK must first seek his dad’s public endorsement! What’s at stake?

On the table for now, are two options which are being studied further on how to ensure a smooth takeover by Gen. MK as he’s fondly refered to.
The first option is to use the NRM parliamentary caucus while the second option is to use the District Executive Committees (DECs). What is however, still baffling the strategists according to Inspectors, is which of the two options is more simpler, well grounded and of course not very expensive.
Inspectors suggested that in the first plan, the caucus is to be ferried to Kyankwanzi where the MPs will be allowed to interact with MK and make resolutions at the end of the day. In this retreat however, current chairman Gen. YK Museveni will not step at Kyankwanzi. It will only be Muhoozi to go there and gets a full interaction with legislators. This plot is however, viewed as a rather expensive one as MPs as taken as ‘very greedy’.
Secondly to this MPs’ project is the fact that it may not gain legitimacy and support among grassroots party supporters.
“Caucus is ok but if he wants wider legitimacy, people don’t have much confidence in MPs because they are easily buyable” says a top Inspector in MK project.
Aware of this weakness, the other option on table is using DECs. By using districts, first of all MK would have dettached himself from his father who has always used the caucus to carry out his missions.
“MK should organise at district level. When he does this, the districts will each pass resolutions endorsing him. In case of cities, he will get from all divisions endorsing him” says an Inspector.
In order to conceal the plot, MK strategists want these district meetings to be organized through hastings/political meetings without a clear agenda to the participants.

“The meetings should be disguised as brainstorming meetings” our inspector said.
MK according to the plan is supposed to secure resolutions from these meetings to be held from every district. It is being suggested that since the NRM secretariat at plot 10 Kyaddondo is busy with it’s main program, MK may use the Office of the National Chairman at Kyambogo or he can alternatively request his dad also NRM chairman Gen. Museveni to allow him to create an axillary structure called NRM MK.
“When you get all these resolutions saying he is our sole candidate, they (resolutions) will be sent to chairman Museveni, SG Todwong and then Government chief whip” an inspector explained.
We are told the resolution shall expressly tell Museveni, Todwong and chief whip that as districts, they have no other person for president but MK and therefore the MPs will be summoned to Kyankwanzi to affirm the resolution.
“The districts will tell those MPs that they need to respect their views and if they go against them, they will not campaign for NRM in 2026.” An inspector said.
By telling MPs in such a manner, the plotters want to provide for a model to tie MPs so that MK doesn’t spend a lot of money on them.
“Those MPs are greedy. They have milked Museveni a lot. That’s why MK should come with a different approach to try to isolate them on key decisions making. DECs require little money. Already MK has his support. The youth at grassroots say his name is associated with service delivery not talking. It’s about do, do, do. You can see the way he has delivered in UPDF. It has shown that he’s capable” a top Inspector said.

Last week when he launched his birthday craze, it was Bushenyi district that first went up in wild jubilation. This was calculated. Inspectors said by doing this, MK was trying to seek what was baptized as ‘anointment’.
Within the system, it is believed that Bushenyi is a significant and power denominator or broker region. It’s significancy goes all the way to Milton Obote II. When Obote met hostility as he tried to land in Entebbe upon return from Tanzania in 1980, he decided to go to his UPC stronghold-Bushenyi.
“He landed here and kissed the ground. Bushenyi is an anointing region. In other words, as far as Obote was concerned, the sweet soil that represents Uganda is not Mbale, Lira etc but Bushenyi. No wonder, even MK, the first birth of his bid started in Bushenyi” our Inspectors said.

The whole project is being calculated to materialize from the areas of Teso, Acholi and Western Uganda.
In Teso for example, the appointment of several of it’s sons and daughters to key power positions was allegedly a strategic move. Here is why?

In 2018, president Museveni attended a heroes day ceremony in Bugisu. Here, many people including Alupo were awarded with medals. Museveni on this day made a statement that up to now is still vivid in the minds of those running the system. He said Alupo had excelled in military training and showed bravery when she did the most hard segment of the course involving use of a rope. For that effort she exhibited, Museveni awarded Alupo a medal. In fact, we can exclusively report that Maj. Alupo is due for further training after which, she will be promoted to a senior rank on the forces possibly that of brigadier general. She will undertake this course either in Kimaka or abroad, according to Inspectors.
When she returned to parliament, Museveni appointed her as the country’s number Two, a position she has ably held.
It should be recalled that Alupo and MK have always been working together with the latter having even graced the memorial service for Alupo’s dad George Epel on delegation by Museveni.

With Alupo in the VP seat, then comes speaker Anita Among who is said to be the one executing the mission to tactfully quell all opposition rhetoric against MK. She’s said to have began this assignment the moment she became deputy speaker. Hence, the reason most opposition MPs have almost lost their appetite to speak anything against MK.
“It’s not only among opposition members but also opposition within the NRM system. Anyone who is against MK must be reached out to. This is what she was doing as deputy speaker. Can’t ask yourself why opposition members are increasingly becoming dumb? She’s doing some work” an inspector said of Anita who’s the country’s number Three.
On the military front among Itesots, MK has Brig. Ogik as his deputy CLF, Gen. Peter Elweru as deputy CDF, Gen. Jeje Odongo as in charge Foreign Affairs, among others, all deployed by his dad also CiC, Gen. Museveni. In Bugisu, he has RCC Ahmed Washaki a former FDC activist who’s now a strong crusader against corruption in NRM.
In the North, there comes CJ Owiny Dollo, the man who’s reported to be calendestinely mobilizing the youth for NRM through his brick laying strategy. Dollo himself is a former MP and minister and therefore, his mobilization skills cannot be underestimated in the MK bid! These and many more NRM cadres are reported to be laying a strong fabric for MK to easily capture their sub regions in case Gen. Museveni finally endorses him as his successor.

Inspectors stated that even as MK has support, the issue of Bobi Wine is still a stumbling block for his bid if a free and fair poll is to be organized.
It’s stated that whereas Bobi of 2021 had no structures, today he has amassed several volunteers. The main worry is about the teens. Those who were 13yrs in 2021 will be of voting age in 2026 in addition to his support base of 38% he got in the last election.
“So, MK shouldn’t be misled by MPs. They may grab this project and pass Kyankwanzi resolutions but these will do nothing. Declaring him sole candidate is for purposes of getting to the ballot paper not on the ground. That’s why he should get legitimacy from the ground (districts) not that caucus” an inspector warned, adding that if he does this (rely on caucus), the president should be ready to resort to Obote II strategy of 1980.
“Our candidate will not get support we need if we don’t begin from the ground to top. Maybe, the other option we have is adopting Obote II strategy. It was about seats allocation. So, there was virtually no election. Every Returning Officer was required to declare ‘Kayunga (LC5 by-election) style” our Inspectors said. In the Obote II strategy, regions like Buganda and Busoga where Bobi is reported to be more grounded shall be left to vote their style and in the rest of Uganda, Returning Officers will have to be dictated to declare the candidates to be declared winners.
MK is currently in the news for holding a mega birthday party that was also attended by his uncle Paul Kagame who had spent years minus stepping on Uganda’s soil.
Also see our story (Museveni Succession Takes Shape In NRM-www.theinspector.co.ug). Watch this space!