After years of toying with their ailing patriarch’s health, the family of Gen. Moses Ali has finally resolved to give him some “rest”, The Inspector has exclusively learnt.

The development was intimated to us by a source privy to the matters ongoing in the Ali Family.

According to the source, the family finally backed down and agreed to let their old man go slow on the rigorous demands of public life following heavy backlash the ‘Giant of West Nile’ received over insisting on appearing on state functions while visibly in poor health.

The criticism of Ali was so hostile that it forced the family members to come out and defend him as still being strong despite the ‘negative public opinion’.

This criticism heightened earlier in March, when Gen. Ali was captured on camera visibly gasping for breath and rocking his head from side to side during the election of the speaker at Kololo Independence grounds.

The incident elicited massive calls for his retirement over advanced age which seems to have weakened his body so much that he can’t handle the pressure of sitting through public functions for long hours.

The calls were however masked by a vehement defence of the huge general which was put in by his family members through Ali’s daughter, Mariam Ali.

“He is fine and resting at home right now. What you saw was caused by discomfort from the chair he was sitting in at that moment but he is in perfect health,” Mariam said.

However, Mariam’s words would soon be disproved when shortly after the Kololo incident, General Ali tumbled out of nowhere and nearly landed on the ground while in parliaments. Once again, the calls for retirement resumed; this time going unanswered or undefended.

A source has intimated to the inspector that following the second incident, the Ali family convened a crisis meeting in which they finally agreed that the general’s life was more important than any allowances or any other benefits he can draw from attending public functions.

It was thus agreed that while he would not entirely withdraw from his calling of serving the Ugandan public, he would scale down on public functions, especially those that last very long.

“The general consensus held by members during the meeting which was attended by Ali family members and close friends was that the president cannot fire Gen. Ali or even get annoyed when he doesn’t attend a public function because he understands his dedication over the years and appreciates the health status which age has occasioned on him,” a source told us.

According to the source, members also agreed that Ali’s continued appearance in public while ailing only undermines the General’s illustrious legacy as opposed to proving his strength before Ugandans.

“That’s how it was agreed that he will only go to public functions when he feels perfectly fine health wise as opposed to the current case where he labours to attend every function,” the source added.

It has emerged that the new strategy of under supplying Gen. Ali took immediate effect, which is why he was a no-show during the reading of the recent state of nation address by the president at Kololo. 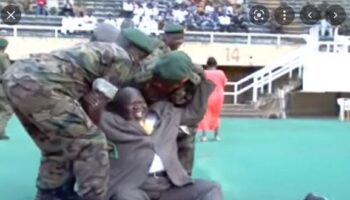