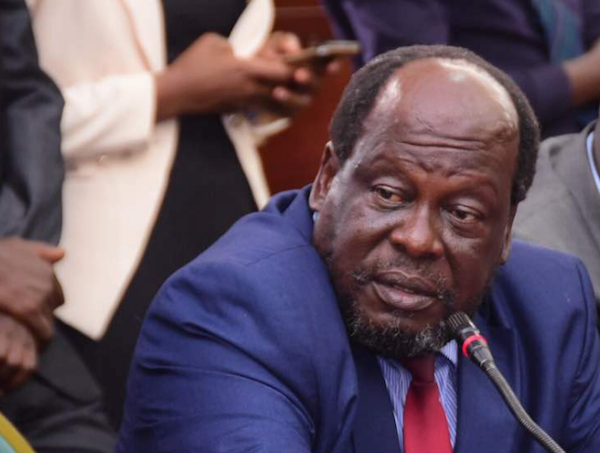 Just a little careful look at the tenses and punctuations in this write up,arouses suspicion.In my analysis, this was a hurried piece that was draughted in the twilight of the Generals demise, defying the notion that, its an extract from a stanza of a carefully written book,to be published.This makes, no amount of sanitizing, alter the recklessness,timing and insensitivity that it has already created.

That said, Odonga is entitled to free speech and expression of his feelings, however, his profane accusation of a dead person, who can not defend himself, is abhorrent and can not go unchallenged.

General Lokech is no doubt, a hard working individual who grew up the rank by expression of courage in the battle field and humility in service.

From the description of his teacher,who happened to be my father,he was a descent boy then,and a descent,but more carefully worded man when he met him later as deputy IGP. Most of his contemporaries,describe him to have no time for injustice ,corruption, mediocrity and dishonesty.

Having taken on the role of IGP, his job description was clear;to preside those who managed law and order on a daily basis.He would then do this without masking the above attributes.

If law and order is to be managed with equity,and every member of the society is to live in tranquility, criminals will be rubbed the wrong way.

Gen Paul Lokech did not only envision that criminals should to be handled with a firm grip but, being a son of the soil,he had also noticed that there are some politicians,even in his own area who were living a life above the law and trampling on the people they led, with impunity.

In his legacy,in my opinion,Gen Lokech was trying to pacify his own region from these actions

Hon Odonga was such,an alleged criminal,who had used politics, for longtime to practice life above the law. He was alleged to have,among other crimes, intentionally knocked a packed vehicle of a business man,at another occasion, assaulted a journalist and walked away with it. All these cases were lying cold in the police stations.
It’s common knowledge that when you have a cold case in the police and you continue to commit others, all your cases can resurrect and can be revisited within the law. The notion that Odonga had allegedly committed one case early in his life,does not make the case obsolete.After all, he had been told by the fearful police officers at that time to settle with the victim out of police, but as belligerent as he always was,just ignored this poor journalist with impunity.

Lokech being a man of action and trying to pacify his own region from these impunity of the local politicians was trying to create order and show these small gods that being a politician was not a green card to trample on your subordinates and go away with it.

The reason why Odonga would describe a prolonged odyssey in his otherwise simple alleged criminal cases, is because he was not a good citizen. Good citizens do not hide in the bushes, evading the law, they face it, head on.Law enforcement all around the world react with different precision, if an alleged criminal do the following;evade arrest,wasting police time,verbally or physically attack law enforcement officers, fails to take orders of law enforcement officers or kill a law enforcement officer on duty.When you do the above, you will be treated as a special suspect with caution and precision.All eyes will be on you.This is the practice you have seen every where around the world.So Odonga Otto should know this.

It still surprises me that Hon Odonga, who is a legislator describes his evasion from the law with pride.No one will wonder why he would be treated the way he was,beacause he contemplated and premeditated his evasion of the law with intent to either humiliate law enforcement officers or the law.

Fortunately he does not assert that the law enforcement agencies physically tortured him,he even narrates how kind they were to him all along his trips,yet he contradicts himself by saying that these orders came from the Deputy IGP.

Hon Odonga must know that his case was not the only case that that Gen Lokech handled with a firm hand.

I have been told of how the RDC of Lamwo, was hunted by these alleged Lokech’s people like a chicken thief, for almost two months. His escorts arrested and would only settle when he reported to the authorities and solved the problem at hand.I was even told he Lokech had tough exchanges with the Hon Hillary not to shield the RDC from arrest.

This astute actions, were good in my opinion, in providing coup de grace to the political leaders who were raiding life like they were demi gods.

That aside, his actions all around the country was evident, with a process by process approach to criminals else where in the country side, while concomitantly engaging the public with regular and meticulous press conferences.In Kampala,for example,the confidence levels of the public,towards the police had improved.

Hon Odonga,should not make his case sound unique and play victim. He is himself, was a person who had used his office of MP to plunge impunity on those below him.There are even recorded messages of some of his own aids, complaining about his own mistreatments.Therefore,even if the General errored in his short but result oriented reign,in the the process of handling his tasks,every one has their own skeletons in the closet.

Lastly,If Odonga,really believes that the law enforcement officers handled him out of the confines of the law,under the instruction of Gen Lokech,why didn’t he take them to court.He is himself a lawyer,as I hear.

For now let him give us time to mourn the good General,as I implore the elders to carefully look at his outbursts.In my opinion it borders sacrilege and may need traditional interpretation and intervention, according to the Acholi culture.