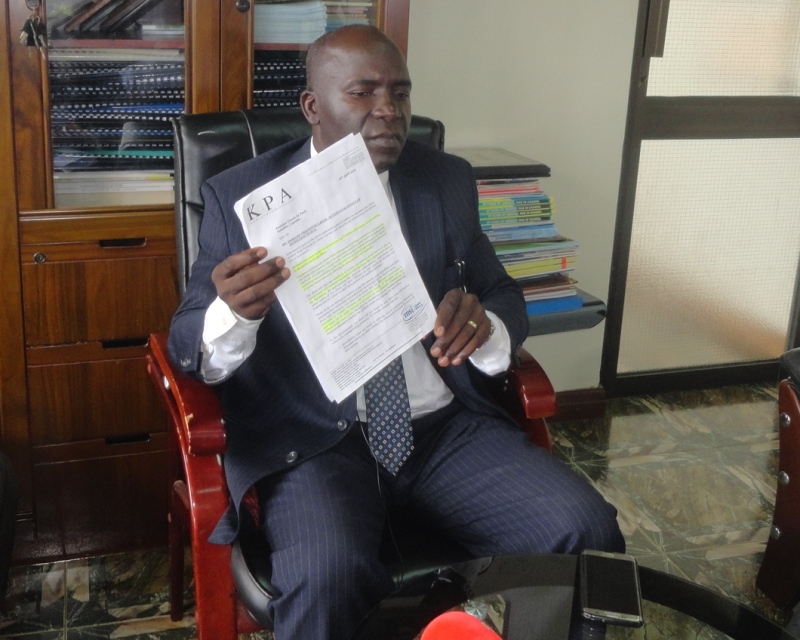 Karma seems to be paying embattled Entebbe municipality Mayor Fabrice Brad Rulinda in the hardest currency if troubles befalling him are anything to be considered.

In the recent past ever since his controversial declaration as Entebbe Municipality Mayor, NRM-leaning Rulinda has been thrown out of a home over failure to pay rent, while a few weeks ago, the Court of Appeal nullified the High Court ruling which would have kept him in the office he is accused of having stolen from rightful winners in the previous general elections.

It should be remembered that earlier this year, Entebbe High Court Judge Isaac Muwata gave Rulinda temporary relief after he dismissed an election petition in which Rulinda’s rival Vincent Kayanja de Paul of the opposition Democratic Party (DP) sought to have Rulinda kicked out of office over election fraud.

Events of the day show that initial provisional results from all various polling centers in Entebbe Municipality had placed the outgoing mayor Vincent De Paul Kayanja in the lead, followed by NRM’s Michael Kabwama Mutebi, NUP’s Oliver Nasuna (3rd) and Mayor elect Fabrice Rulinda in the fourth position. However, upon reaching the tally center at Wakiso district, results miraculously overturned, placing Rulinda in the lead, NRM’s Mutebi second while Kayanja had been relegated to third place, with NUP’s Oliver Nasuna tailing in fourth position. And subsequently, a heavy deployment of armed security men around Wakiso District Returning Officer Tolbert Musinguzi ensured, hence enabling him to declared Rulinda winner without fear or favour. The declaration, however, infuriated the waiting voters who instantly went violent protesting what they called outright robbery of their votes. The protests forced the armed joint security men to shoot at the voters killing one person and injuring two others in the process.

It is also against this dissatisfaction that Kayanja rushed to court accusing Rulinda and the Electoral Commission of robbing his victory.

However, Kayanja lost the petition after the judge refused to hear his affidavits and those of his witnesses on grounds that they were based on mere hearsay. Still dissatisfied with this ruling, Kayanja proceeded to the court of appeal where he has successfully had high court judge, justice Muwata’s decision overturned.

In a unanimous ruling, the three justices of the Court of Appeal led by Christopher Madrama, Fredrick Engoda Ntende and Eva Luswata Kavuma, quashed the decision of the High court and consequently ordered for fresh hearing of the petition. They also ordered Mayor Rulinda and the Electoral Commission to pay legal costs for Kayanja’s petitions filed in both High court and Court of appeal respectively.

In their wisdom, the Justices have ordered for remittance of Kayanja’s petition to High court for trial and that evidence at the trial be proceeded by summoning witnesses of either side under the civil procedure rules in the ordinary way. The justices added that witnesses will be summoned to court and take oath before each of them is cross-examined by option of the opposite party.

The justices reasoned that High court Judge Muwata erred in Law when he based his decision on the preliminary objections by Rulinda’s Lawyers that Kayanja’s affidavits were based entirely on hearsay and the annexure thereto are forged.

Meanwhile, as Rulinda pondered over the Court of Appeal loss, more trouble followed him when his landlord evicted him from the house he was using as his tactical base during the mayoral election campaigns.

According to our reliable sources, Rulinda moved into the house located at Kiwafu Central Ward B and belonging to Omulangira Silver Lumansi ahead of the 2021 election campaigns. This was because this house which was formerly a recording studio was spacious enough and also had gardens where he met his voters and campaign agents.

However, he is said to have stopped paying its rent after he left it and shifted to a more luxurious home with a swimming pool, located along Jinja road in Kiwafu Central Ward. “Since e shifted he stopped paying rent yet the house was being occupied by his aides and hangers-on,” a source said.

We have since learnt that after pursuing his rent arrears totaling to about Shs10m in vain, Landlord Lumansi approached the area LC1 boss Harriet Babirye, in whose presence he brought welders who cut out the main gate to the premises in a bid to compromise the home’s security and force the adamant Rulinda to move out.

The incident was however the second of a kind on Rulinda’s side.

Sources intimated to us that in 2016, Rulinda also had to be forcefully evicted from a house which he rented at customs road, Kinyarwanda Ward, over failure to pay rent arrears amounting to about Shs5m. “that time the landlord seized his household property including a 32-inch television to recover some of the money,” a source said.

Sources close to Rulinda however say that he simply suffered a misunderstanding concerning the Kiwafu house because he quit it about a year ago.