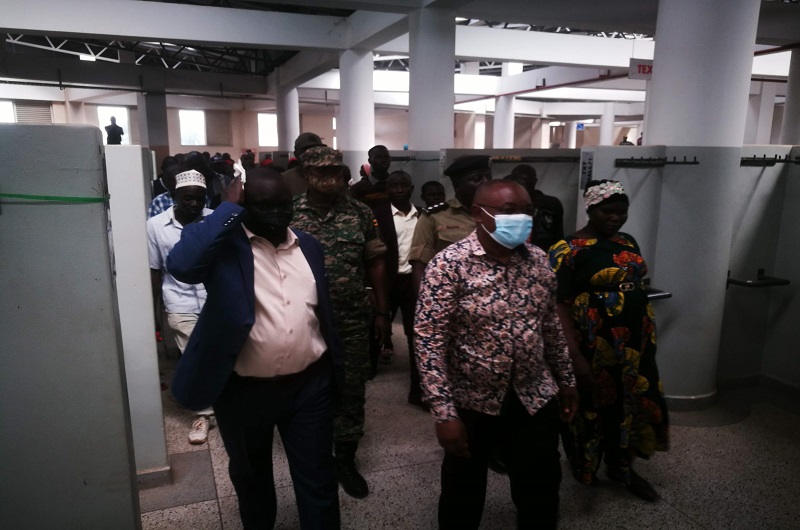 Magyezi and MP Atima (L) while inspecting the stalls and lock-ups in Arua central market. PHOTO BY ANDREW COHEN AMVESI

ARUA. Rapheal Magyezi, the Minister of Local Government has asked the politicians and technocrats in Arua City to resign their positions if they want to become vendors in the new Arua central market.

Magyezi issued the stunning directive following reports that politicians and civil servants in the city have allocated a number of stalls and lock-ups in the market for themselves and their relatives, leaving many genuine vendors to suffer.

Magyezi has camped in Arua with a team of technical officers from his ministry with the aim of solving the impasse that was about to cause insecurity in the city.

“If you are a councilor in Arua City, don’t become a vendor. You can decide to remain a vendor and you resign from being a councilor. If you are a technical staff in Arua City, don’t become a vendor because it is a conflict of interest,” Magyezi warned during a meeting with vendors and the city officials at the former Arua Hill Division offices on Wednesday.

“And we don’t have absentee vendors in our markets. So, if you know that you have got a stall or lock-up and you are not a vendor; by a vendor I mean somebody who reports to trade every morning and ends up in the evening and goes home. If you are not that one, handover your stall or lock-up back to the Town Clerk,” Magyezi directed.

The Minister stressed that they don’t have sub-renting and renting in public markets in Uganda.

Magyezi stated that he is going to investigate reports indicating that people are getting money to allocate stalls including those who are not supposed to be in the market but they are having stalls there.

Magyezi said he has also observed that the city collects a lot of revenue from the markets but it seems the money is not getting into the city coffers.

“So, whoever is in charge of revenue in this city should get his committee for finance and I’m going to tell you what you are going to do with your committee. There is a lot of money in Arua city, I could not believe it when we went to Gaagaa market, a big market and I quickly asked a vendor how much are you paying here? The lady is paying shs20,000 per month. You just multiply that amount by the number of vendors in that market, you will just get the shock of your life!” Magyezi said.

The Minister promised that they are going to find out and ensure that this revenue goes for the right purpose.

Jackson Atima Lee Buti, the Arua Central Division MP who was in the company of the Minister said he wants the team from Kampala to investigate the whole matter to allow the right people to get stalls and lock-ups in the market.

“Let the right people be allocated spaces in the new market and the excesses, especially those who can’t fit there, let us gazette those private markets and they continue doing their businesses there,” Atima said.

“Hon Minister what I now want to say lastly is I guided the Town Clerk with the RCC that any eviction done must be owned by the city council. Let the city take the responsibility by passing a resolution that we are evicting in this place so that it is owned by the city. Unnecessary evictions are going to cause bloodshed which I don’t want,” Atima added.

He said let people be sensitized, let there be a gazetted place where they can be relocated and let leaders persuade people to go like they are being persuaded to go to the new market so that there is peace and harmony in Arua City.