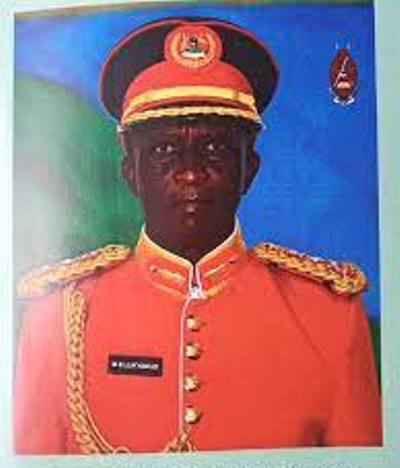 A UPDF has been dragged to the director for Chieftaincy of Civil Military Cooperation for meting gun violence on a family whose land he wants to forcefully grab.

Our Inspectors have identified the top soldier as Brig. Gen. Moses Shaban Lukyamuzi. According to particulars of the case, the administrators of the estate of the late Nekemia Masabo Lwanga Sempagama of Nkumba Bufulu zone, Entebbe sub-district, accuse Lukyamuzi together with bodyguard Hamdan Lutamaguzi of attempting to grab their land through use of force, violence and intimidation — all of this done in total disregard of court orders.

According to a petition filed by the complainants’ lawyers of Kintu Nteza & Co. Advocates, addressed to the Director of Chieftaincy of Civil Military Cooperation on October 26, 2021; brig. Lukyamuzi committed the crimes against them beginning early June this year.

The petitioners say that during that period, the army boss approached the deceased’s family members and allegedly asked them for a piece of land in exchange for protection from imposters and land grabbers. However, the family members informed him that the land was already distributed amongst themselves by the High Court order through a consent judgment executed on May 14, 2021.

However, the members were shocked when on June 29, 2021, Lukyamuzi returned to their land flanked by his bodyguard and about 20 hooligans who allegedly went on and removed all the mark stones and fencing poles from the deceased’s land measuring 3.5 acres.

It’s said that while on the land, Brig. Lukyamuzi arrested Moses Mutaasa, one of the administrators of the estate, and dragged him to Entebbe police station and opened a case of criminal trespass and malicious damage against him. Later, police took the file to the Entebbe Resident State Attorney who dismissed both the charges before closing the file for lack of evidence.

Having failed to win the two cases, Brig. Lukyamuzi once again raided the disputed land on October 3rd, 2021 while in company of three armed UPDF officers who came in a black Toyota Harrier and allegedly put all the workers who were cultivating land at gunpoint. They were then thoroughly clobbered and ordered to remove the mark stones and fencing poles from the disputed land.

The victims later filed a case of criminal trespass, and assault against Brig. Lukyamuzi, his bodyguard Lutamaguzi and others but unfortunately Entebbe police distanced itself from the matter saying it has no jurisdiction over army officers.

Meanwhile, the deceased’s family in its petition wants the Chieftaincy of Civil Military Cooperation to intervene and take appropriate action against the mentioned officers who have used their army ranks and UPDF uniform to commit crimes with impunity against innocent law abiding citizens.