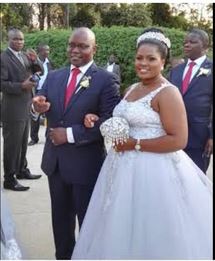 A top Kenyan politician has been identified as the root cause of the marital woes afflicting ex-State Minister for Finance Gabriel Ajedra Aridru and his wife Elizabeth Kamuhanda.

As we earlier reported on this website, the ex-minister is in the thick of a divorce battle in which he and his wife Kamuhanda seek to part ways over irreconcilable differences.

For instance, in her cross-petition filed in the High Court Family Division at Makindye, Kamuhanda accuses Ajedra of infidelity and consequently squandering the little wealth she and him had acquired on the numerous mistresses that he has within the city. These mistresses — who are equally Ajedra’s co-defendants in the Divorce Cause No. 152 of 2021 — include: Aisha Alibhai, Nyakato Jennifer, Benna Annette Murozi and Mickey Bibiana. Elizabeth cites a particular scenario where Ajedra diverted money which was meant to construct the house for their children in Sonde to constructing a home for Aisha Alibhai in Najjera.

However, in his counteraccusations, Ajedra denies Kamuhanda’s assertions, instead accusing her of stinging cruelty which even made him resent staying with her.

He, on the other hand, also accuses Kamuhanda whom he officially wedded in January 2017 of infidelity. He told court that she even sired a child with another man and also sleeps with a man she disguises to be her sibling whereas not.

Ajedra says that their marriage suffered an irreconcilable crack in 2021 when he carried out a DNA test on what was to be his first child with Kamuhanda and discovered eight years alter in 2021 that she was not his own. This was even after he had named the child Gabriella Alemira Aridru.

According to sources, the man Ajedra accuses of siring an extramarital child with his wife has been identified as Patrick Khaemba, 67. It is highly suspected that Khaemba and Kamuhanda engaged in their illicit romantic affair about nine years ago while he worked as the African Development Bank Country representative in Uganda. He left the job in 2021 and went to Kenya to join politics and is currently serving the last of his mandatory two terms as the Governor of Trans Nzoia County. Information further reveals that Khaemba is husband to three wives. The other man Ajedra accuses of spoiling his marriage has been identified as

Brian Williams Ahimbisibwe. Sources say Brian hails from Kabale just like Kamuhanda and works as an HIV/Aids Volunteer Social worker. He is married to a one Harriet Ahimbisibwe. It is by virtue of coming from the same place as Kamuhanda that it was easy for her to introduce him as her sibling, a claim Ajedra protests.

Ajedra told court that his suspicion that the two are lovers stemmed from Whatsapp messages he intercepted between the pair.

“The respondents are and still continue to have an illicit affair in which they exchange sexual pleasantries. On several occasions the appellant has found the respondents in a compromising position in the matrimonial home,” Ajedra’s petition reads, in part.