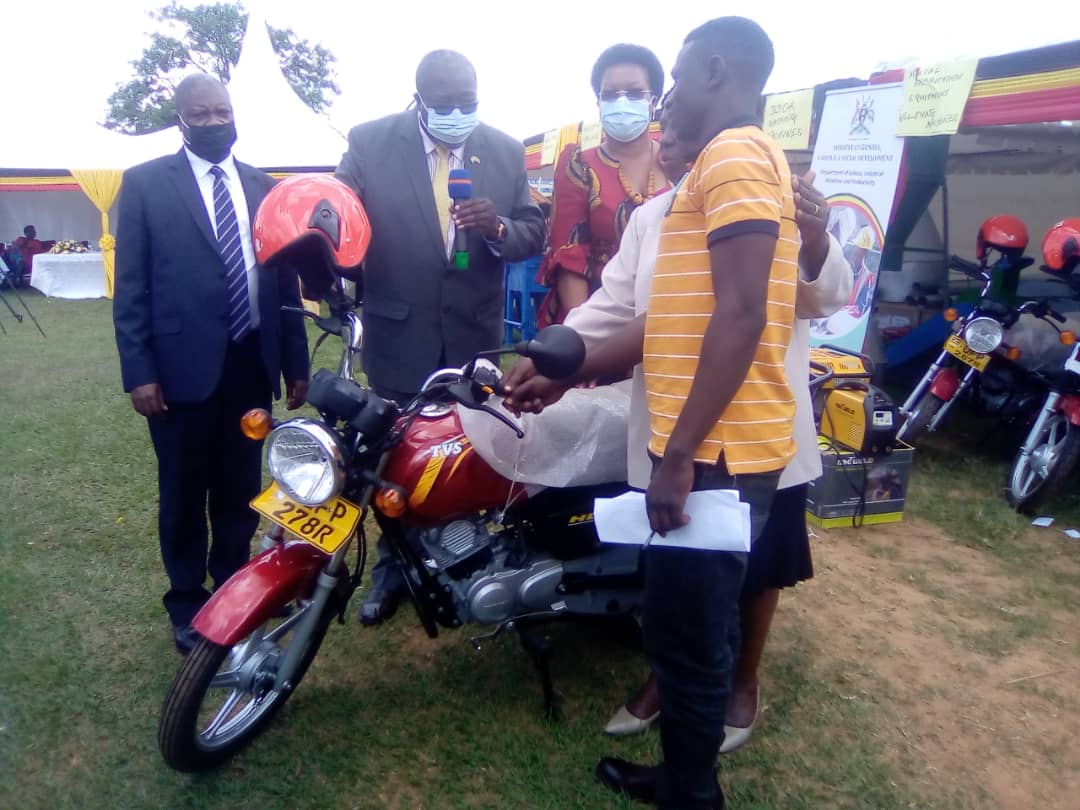 The ministry for gender, labor and social development under its Green Jobs Program has given out tools to various groups of youth, women and Persons with Disabilities (PWDs).
The benefiting groups came from the districts of Bushenyi, Bulambuli, Amolator, Oyam, Arua, Tororo, and Rukiga among others.

The function took place at the Uganda Museum where the groups totaling 93 selected from 22 districts received the tools. The tools included sewing machines, generators, compressors, baking woven, saloon equipment, boda bodas among others.
According to the ministry’s Commissioner Labour and Industrial Relations, Alex Asiimwe, the Green Jobs Program seeks to increase jobs and targets both educated and uneducated men, women and Persons with Disabilities. He says the ministry since 2018, has been going to regions giving out tools to Jua Kari groups.

“We have been to Kampala, Busoga and we have now expanded to other regions to ensure that all Jua Karis who want tools get them” he said, adding that the ministry is now looking at giving these tools at constituency level.
Meanwhile, the state minister for labour Col. Charles Engola Macwodongo who officiated at the handover, noted that unemployment and law labor productivity are some of the serious challenges facing the country. He said every year, 700000 people enter the labor market yet the economy can only absorb a few. He said majority of youths who fail to get the jobs end up in subsistence agriculture and informal sector.

“The informal sector is so huge and it contributes 52% of GDP. However, they face shortage of capital, skills, equipment and lack of adequate training. In view of that, the Green Jobs Program seeks to answer all these (challenges) and create green and descent employment. The program complements other government programs such as Emyooga and PDM to reach the informal sector” he said at the handover.
He cautioned the beneficiaries against selling off the tools, adding that the machines are not only for business purposes but also to train others.

“When you use them well, then it will give us the energy to go to parliament and ask for more funding for these tools. Use the equipment and improve on productivity and create jobs. These tools are for groups not individuals. We shall continue to monitor you through our technical teams” he said and asked commissioner Alex Asiimwe, the brain behind the Green Jobs Program to ensure that he dispatches technical teams to go to beneficiary districts and regularly check on the groups.
“I also urge MPs, since you’re closer to these groups and you always go to your Constituencies, try to follow up these groups. We also urge you to join hands with the ministry and lobby for more funds” he said.

He said next financial year, the ministry plans to expand the program to reach every constituency. He urged the groups to join the Parish Development Model Program and also commended his boss Yoweri Museveni for what he called ‘driving the country’ to the direction of development.
The function was also attended by state minister for youths and children Nyirabatshita Sarah Mateke and a section of MPs.